A year ago, our little dude was SO sick. We wouldn't know for a few more weeks just how sick his heart was, but we knew from how he was acting that it wasn't good.
At all.

A year later, his heart honestly isn't much better.
But we have him on a darn good cocktail of meds, so that his heart isn't so mad that it's sick anymore. I like to think his heart is kind of like "meh, whatevs. I know I'm pretty messed up right now, but hey, aren't we all?  I'm just gonna go with the flow here."
Which means we're in a sort of weird limbo, where we know his heart is only going to get sicker, we just don't know when.

But we do know today isn't that day.
And for that, we are profoundly grateful.

Today he had appointments with both cardiology and electrophysiology, and everything was almost the exact same as it was in August, except that he's gained 2 more pounds (Hallelujah - maybe he won't really grow up to be 6'4" and 47 pounds as a fully grown man)! Even his BNP (already down to a normal range) was only 1 point off of where it was in August.

When you're waiting for a heart to fail, "things look the same" is kind of like winning an Oscar.
(Well, actually, it's probably more like an Emmy (maybe the technical one that doesn't get shown during the televised awards show?) - you really want the Oscar, but if you can't get one, you'll take this freaking awesome Emmy and party like a rockstar at the after parties. The Oscar would be "Surprise! His heart has healed itself!" But I digress...)

At any rate, we get a 3 month pass before we go back and do the same hold-our-breath-cross-everything-and-pray-really-hard song and dance all over again.

And in those 3 months, we get to celebrate Thanksgiving and Christmas, and get ready for Bodie's 8th birthday!

I'd say that's about the best kick off to the holiday season we could ask for.

I know this kid is excited. 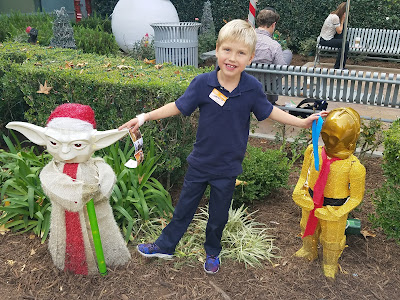 He could hardly contain himself in the CHLA garden today, which has been decked out for the holidays.

And in almost this exact same spot, one year ago. 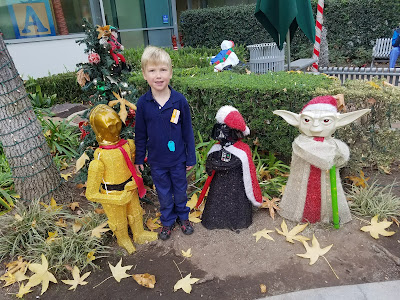 What's crazy is to compare these two pictures side by side. 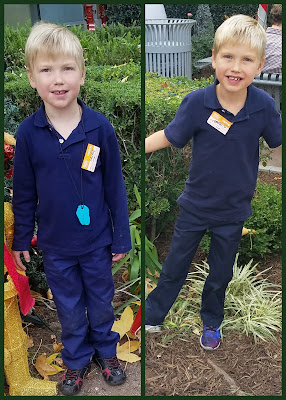 Everything about these two pictures brings tears to my eyes.
He was so, so sick.
You can just see in his eyes, and in how he's standing, how tired he was.
But this year, he just seems lighter somehow.

This mama is so, so grateful right now, for this boy, and this hospital, and a God who always has His hand on this boy. 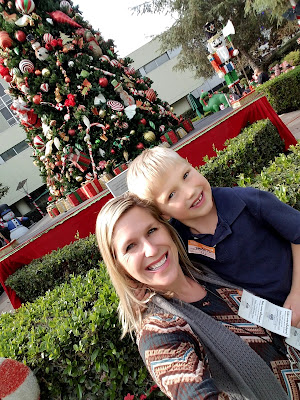 This year, heading into Thanksgiving, we are especially thankful for this one.
Because The Force...
it is strong with this one. 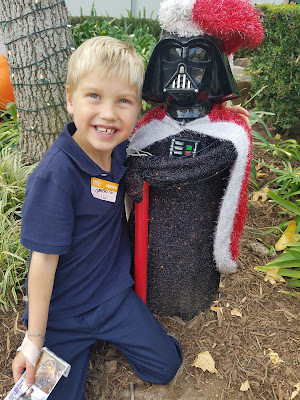 Posted by Amy Bennett at 9:10 PM No comments: