Just so we're all on the same page...

So, we have this family friend. This guy who is at our home almost weekly. In LA, that sort of makes you like inner-inner-inner you know all our secrets sanctum. So, this dude knows us and the kids reallllllly well. And we all love him. Anyway, he was over last weekend and says to Dusk "So, like, Bodie's done with all his surgeries and stuff, right?"

I'm pretty sure my head started spinning. Like straight out of exorcist spinning.

I mean, how can someone who knows Bodie so well not understand the gravity of his situation?

After I picked my jaw up off the floor and my head stopped spinning, we sat down and explained that no, he is not done and that he is actually in severe heart failure and his next step is transplant.

Our friend was genuinely surprised.

Which should give you a pretty darn good idea of just how good Bodie looks from the outside. Someone who knows him really really well didn't even realize the extent of his heart failure.

(By the way, I feel comfortable sharing this story here because the dude doesn't read the blog. Obvi. And, if I somehow guilted him into it by way of our conversation last weekend, um, sorry? But he shouldn't feel bad - B looks so good he fools a lot of people these days.)

But, I digress. Bodie looks good from the outside. REALLY GOOD. His energy is great, he's eating us out of house and home and generally being the funny, ornery Bodie we all know and love.

But with these heart kids, looks can be deceiving. They can compensate reallllllllly well. So, suffice it to say, I was pretty nervous heading into today's appointments with the heart failure and electrophysiology doctors. We were hopeful he would look stable on the inside, but didn't know what to expect.

**His BNP (measure of heart inflammation as a result of his heart failure) is even lower than last time - it's at 25, which is considered low-normal. That is pretty astounding.

**His heart itself is smaller (less stressed and inflamed) than it has been since right after his last surgery. These side by side x-rays kind of blew me away. 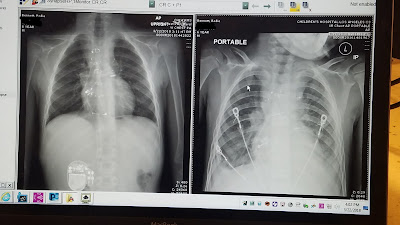 The one on the right was taken in August of 2016. The one on the left was taken today. His lungs are crystal clear and his heart is taking up less space in his chest cavity. Plus, his pacemaker just looks super cool on the bottom left.

**His rhythm is about the same as it was last time. He's in an abnormal rhythm approximately 50% of the time, which is pretty consistent with his last appointment.

The best news? Assuming the Zio Patch monitor we put on today doesn't show anything alarming, we got a six month pass until we have to go back. A SIX MONTH PASS, peeps. In the world of heart failure, this is huge. I honestly didn't even know kids in heart failure got six month passes between appointments. Of course, if anything changes, we'll bring him in sooner, but it's nice to not have to go in sooner.

Today was a very good day.

He's still in severe heart failure.
He will still need a transplant.
Much sooner than we wanted or expected.
There is still no surgery they can do to avoid transplant.
There is still no other medical option other than transplant.
He is still on a boatload of medications (8 serious heart meds, to be exact) to keep his symptoms at bay.
Just so we're all on the same page here.

But, for right now, we're good.
He's not listed for transplant yet.
He's happy.
He's thriving.
He's just a regular second grader, obsessed with Legos and spiders and farts.
We are so grateful for this respite between medical emergencies.
We'll take it.
Because we can get pictures like these.

This is Bodie with Dr. Anoop. 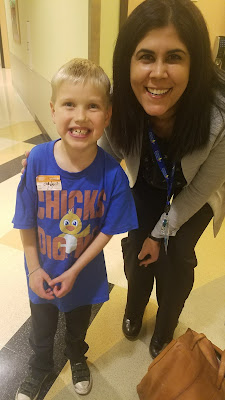 Dr. Anoop was there with us on the night we almost lost Bodie. I will never forget her standing in the doorway of his ICU room for several hours straight, just watching him decompensate, watching and waiting and worrying right alongside us. So to get to run into her today, to get to see the two of them together, for her to see Bodie so full of life, it just meant so much. 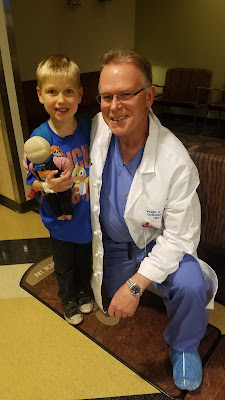 Bodie and his surgeon, the incredible Dr. Starnes.
My hero with his hero.
Enough said.