Our first inclination something was wrong with Baby Bennett 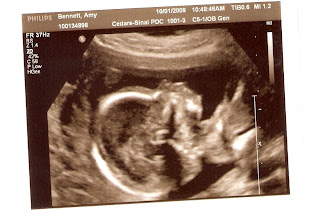 We went in for what should’ve been an hour ultrasound on Thursday and left about 6 hours later. There's a really serious abnormality in baby's heart. The aortic valve is small (and may not actually be working at all - they're not sure) and there's a hole between the two ventricles that shouldn't be there (that's actually what's keeping the baby alive as it's not otherwise getting blood to the left ventricle due to the inoperative aorta). It looks like the heart has developed a work around to get blood flow to the left ventricle, but that work around only works so long as a valve remains open, but the valve in question is one that is open in utero but closes within days of birth. The good news is that, based on what the pediatric cardiologist saw today, she thinks we have a good likelihood of making it to term. It’s pretty early for them to tell exactly what’s going, but they’re reasonably certain it’s one of 2 things (only time will tell):

Scenario 1: Aortic Atresia with Venticular Septal Defect (Best case scenario)Everything stays exactly as it is and the body keeps pumping blood through that hole. Within 48 hours of baby's birth, they put baby on medicine to keep the valve open temporarily and within the week, baby is moved to Children's Hospital LA and has open heart surgery to replace the valve. This surgery has a 5-10% mortality rate. Baby stays in Cardiac ICU up to a month and then goes home. Someday, baby will have to have another surgery to replace the valve (somewhere between 4-5 and the teenage years). These kids are otherwise normal, completely active kids and can participate in sports and everything else.

Scenario 2: Hypoplastic Left Heart Syndrome (HLHS) (Worst case scenario)The left ventricle gets less and less blood flow and eventually stops working altogether sometime before baby is born. Within 48 hours of baby's birth, they put baby on a medicine to keep the valve open, move baby to Children's Hospital and do a more invasive open heart surgery within the first week. Baby stays in hospital a little longer than under Scenario #1. This surgery has a 10-15% mortality rate. Baby goes back at 4-6 months for surgery #2 and then at 4-6 years for surgery #3. Fatality rates from surgeries #2 and #3 are somewhere between 1 and 2%, but approx 10-15% of babies die between surgery #1 and #2. These kids go on to lead more or less normal lives, but are more sedentary due to the fact that they really have only one functional ventricle. As the doctor put it, "they're not going to be Olympic athletes" - but well, let's face it - with Dusk and my genes, this kid wasn’t going to be an Olympic athlete anyway. The doctor seems to think we'll fall into Scenario #1 based on what she's seen already, but we won't know for a few more months. She's going to follow me with fetal echocardiograms every 4 weeks and we'll go from there. The good news is that we’ll know before birth which scenario we’ll fall into.Obviously, we're stunned and (and yes, the thought “can’t we just catch a break” has run through our minds). But the silver lining in all of this is that we live in Los Angeles with really world class hospitals - and Children's Hospital LA (where baby will most likely be treated) is an awesome hospital, so we'll be in the best possible hands.

So, even though we're a bit overwhelmed, we're feeling positive and like this is something we can handle and something that can be fixed - thank God for that! But, we could some prayers for baby and us. Specifically, we’re asking for a miracle – that the problem resolves itself before birth and baby won’t need any surgeries (btw, the doctor was pretty clear this wasn’t likely to happen – hence, why we’re calling it a prayer for a miracle). And if that’s not in God’s plan, just for peace and good doctors to help us and baby through.

Thanks everyone and we’ll make sure to update once we get closer to baby’s due date and know more!
Posted by Amy Bennett at 2:16 PM

Add comment
Load more...
Newer Post Home
Subscribe to: Post Comments (Atom)
"For you formed my inward parts; You wove me in my mother's womb. I will gave thanks to you for I am fearfully and wonderfully made; Wonderful are your works, And my soul knows it very well."
-Psalm 139:13-14