Big Goings on at the Bennetts

Whew! What a crazy few weeks it has been for us! Not only did I announce my trial separation from Facebook (to which hubby replied "Did someone hi-jack your blog account?" Ha!),...

Daddy finally got his say and little dude got one BIG haircut... 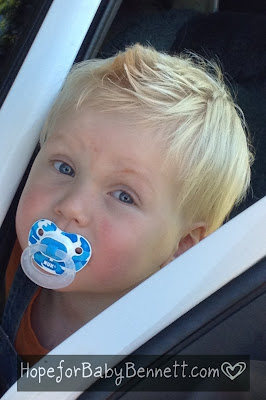 (shhhh...don't tell daddy, but he was TOTALLY right - he looks so much better!)

I finished my One Dress Project (yes, I really finished it!!! More on that later!), we finished flu shots for everyone but daddy (if you happen to see him, kindly nudge him to get his butt over to Walgreen's for his, please!) and we did Halloween!!! 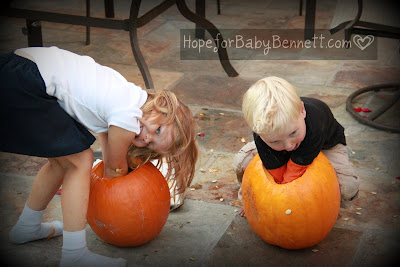 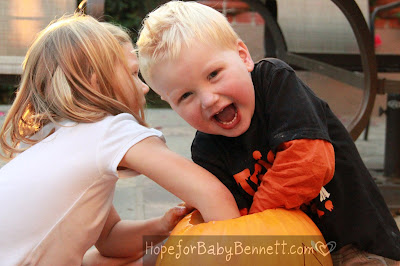 Which thankfully, went MUCH better than last year! 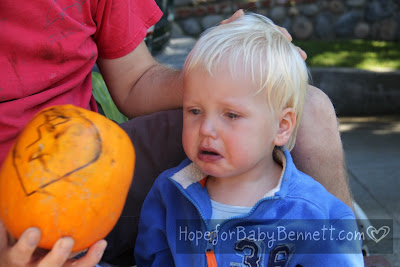 Bodie got to go trick-or-treating with his TWISPP group, which is just about the sweetest thing ever. TWISPP used to be located in an industrial setting, with several large office buildings and warehouses within the same block. TWISPP has traditionally trick or treated through the offices on Halloween and it's a super fun event. Well, TWISPP moved about a mile down the road earlier this year...and the program coordinators weren't sure what they were going to do for trick or treating  this year - until the tenants at the old location called and asked them to bring the kids back - that's how much fun they have! How cool is that?!? So we got to do that again this year - such a great experience. 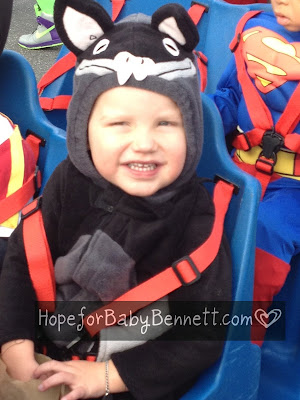 Bodie and I all dressed for the occasion (is he not the cutest little bat ever?). 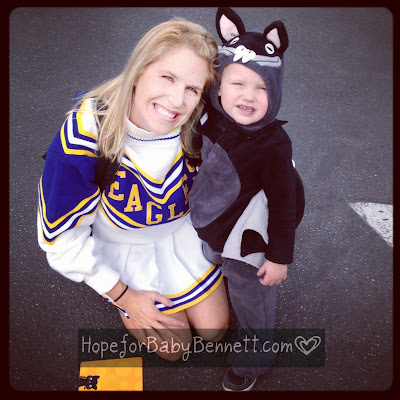 Bodie with his beloved Teachers "Iceman" Jason (in the superman costume) and "Crazy Hair" Adam. 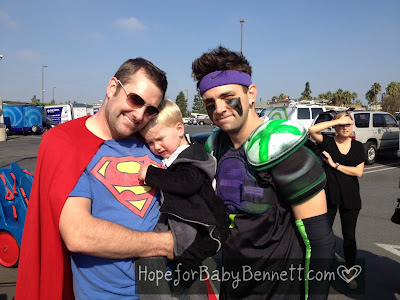 I promise, he loves these guys. He really does. Hard to explain the bond between him and Jason except to say that, as Bodie's mother, I am eternally grateful for the love and compassion these two guys, particularly Jason, have shown toward my son. I already get teary thinking about the fact that they won't be coming with us when Bodie goes to preschool in the winter!

Then, Sierra got to get in on the action, when one of her closest preschool friends and her little brother Giacomo and their awesome parents came over for pizza and Trick or Treating. 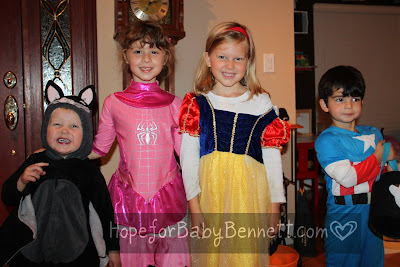 Seriously, are these girls adorable or what? 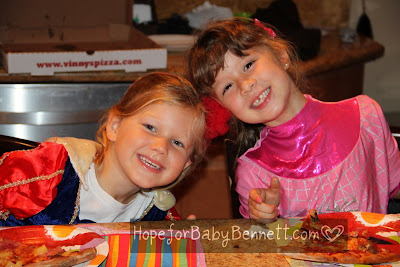 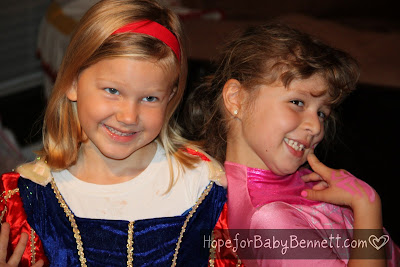 This pretty much sums up Bodie's night. 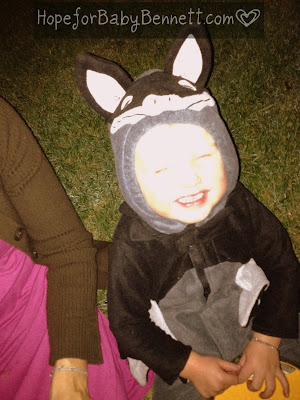 He LOVED Trick or treating. But the poor kid just couldn't keep up. He could make it to maybe 2 houses and then he'd be begging me to "carry me, mama!!!!" We took lots of breaks and even had to bum a cup of water for him from a friendly neighbor because the poor kid was so out of breath. This is pretty standard stuff for kiddos who, like Bodie, are on the later Fontan track. The reality is that he's outgrowing his physiology. And this is just how it's going to be until his Fontan. But I'll be honest - as his mom, it was kinda hard to see. :-( But, like I said, he had a blast and didn't really care that he couldn't keep up!

And because we decided having a single ventricle and rhythym defects weren't enough to make Bodie unique, we've added a diagnosis of asthma on top of it. :( Bodie has always had a persistent cough that comes and goes, usually when he's sick. I just always chalked it up to his paralyzed vocal cord. But oddly enough, over the last couple of years we had discovered that albuterol through an inhaler made the cough a lot better. But it honestly never occurred to be me that he had asthma (I suppose because no one on either side of the family had it, so it never was even on my radar). But I started finally putting the pieces together a month or so ago, and got over my fear that Bodie's cardiologist would diagnose me with Munchhausen's for finding something else wrong with my son and called her for a referral.

We got in to see the Pulmonologist this past Friday. When I explained Bodie's symptoms and his first question was "Ok, now tell me again why you DON'T think your son has asthma?," I knew we were on the right track. Apparently, you can't do a definitive test on kids this young, but based on Bodie's symptoms, the doctor feels strongly that he has mild to moderate asthma. So he's starting him on Flovent twice a day with Xopenex as a rescue inhaler as needed. When he described how asthma works, Bodie's symptoms completely made sense. So, while I'm not thrilled at starting him on steroids, I have felt for a long time like he wasn't comfortable and we needed to change something. I am really hopeful that this can help get it under control and give his body a break! (Something he did say that was interesting was that approx 8% of kids in the general population have asthma, but long ICU stays, multiple intubations, underlying cardiac conditions and open-heart surgery can all put a child at increased risk for asthma. That was definitely interesting food for thought for me). Anyway, we go back in a month to see if the meds have helped at all.

As you can see, Bodie was clearly distressed by this new diagnosis. As I was scheduling our follow-up appointment, I turned around to find that he had stripped his shirt and shoes off and was standing on the table in the reception area, having gleefully discovered Sponge Bob was playing on the tv)... 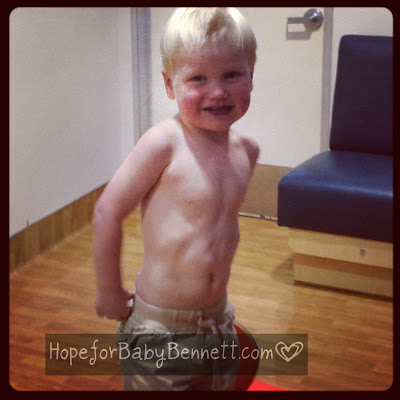 We covet your prayers as we move into this new realm of Bodie's health, that we will find a solution that fits best for him!