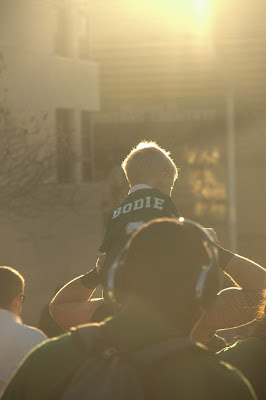 I'm not even sure where to begin. This past Saturday night, we had the most extraordinary experience. I  am still processing it all. I have way too much to say and way too many pictures to put in one blogpost, so I'm splitting it into two. Part 1 is about Bodie's experience. Part 2 is about Sierra's experience.

Both were incredible.
Both are experiences we will never forget.
Both were only made possible through the generosity of some amazing people.
We are so incredibly humbled by the love and care expressed by so many on Saturday night.

To begin with, I have to preface this post by saying that Bodie is sick at the moment. He's been battling a fever of unknown origin since Friday night. It has been coming and going and we've been treating it with Motrin for the most part effectively. We almost opted not to go to the game on Saturday night out of fear that it might be too much for his little body. And I have no doubt that other heart moms might have made that decision were they in our shoes. But our approach with Bodie has always been to let him live his life absolutely as much as possible. And this was a once in a lifetime experience. So, when he woke up Saturday afternoon flushed and spiking another fever, we hit him with a dose of Motrin and went on our way.

The way I look at it, it was just Bodie's way of saying "hey peeps, if you're going to honor me for fighting through so much as a medically fragile kid, I'm going to remind you just how medically fragile I am." Touché Bodie, touché. Point taken.

Let's just say he may not have been as excited about the plan as we were, initially at least. When we got there, he wouldn't look at anybody or engage in conversation, let alone smile for pictures. He buried his head in my shoulder for the first 20 minutes or so. All I could think was are you kidding me? NO WAY this kid is going to lead an entire football team down the hill. This is NOT going to end well.

But I have to give HUGE props to the Cal Poly football team, who wouldn't give up trying to engage Bodie, as he kept walking away from them saying "Not again!!!" over and over. They brought him arm bands and distracted him enough for me to step away.

Here, Cole, the slotback and one of the team captains, chased Bodie down as he walked away from him, to give him a little peptalk. 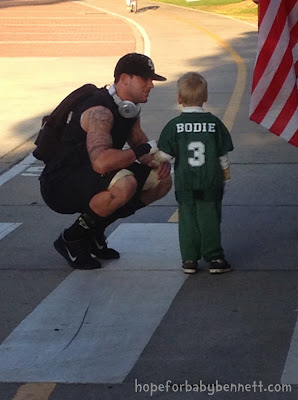 I don't know what Cole said, but whatever it was, it must have been good. Because IT WORKED. It got our first genuine smile of the afternoon. 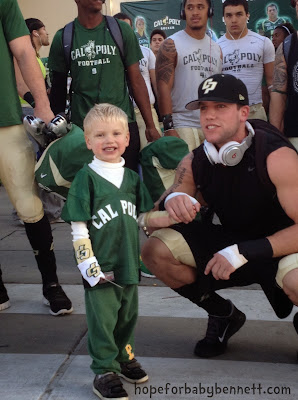 And then, he did something amazing, something that will always endear that college football player, and this entire team, to my heart. That big, burly football player took my sweet 3-year old son's tiny little hand in his, and tenderly walked down that hill with him. He probably thought nothing of it, but it was a moment that will stand in my mind forever. 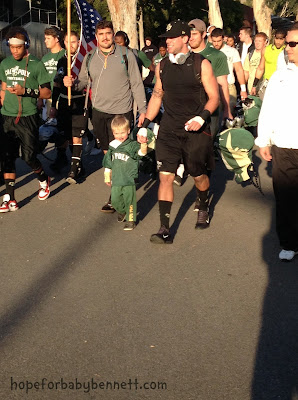 Bodie had the most incredible moment to shine, with onlookers shouting his name and cheering for him. It was probably the slowest that team has ever walked that walk, but I'd like to think it was one of their more memorable walks down that hill. 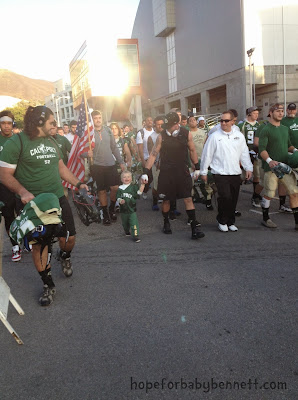 Here's a little snippet of the walk beginning. I love how you can hear the football players and onlookers calling Bodie's name.

(it's not much, since I was walking backwards around the crowd, making sure Bodie could see me the whole time! But you get the gist.)

Bodie amazed me with his stamina. After walking probably 3/4 of the way down, he started to slow down and Cole picked him up and put him on his shoulders. 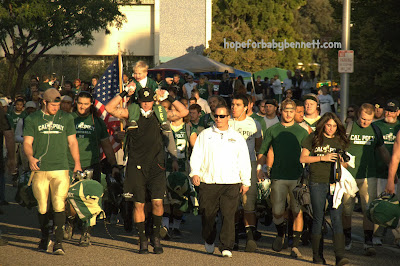 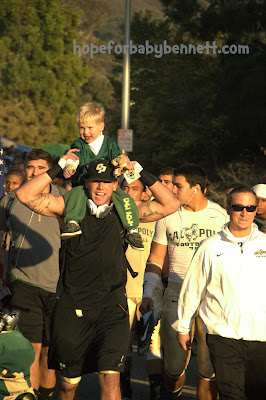 When I met Cole at the finish, he handed Bodie to me and Bodie said "that was pretty cool."

I may or may not have been in tears watching my tiny little boy leading those big football players down that hill. An absolutely indescribable moment for me, to put it mildly.

Afterwards, we snapped a few family photos (daddy couldn't make it for the weekend, since he had to work, but Gigi and Popo were there)! 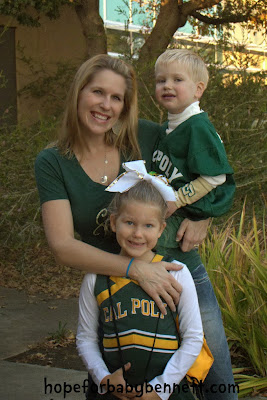 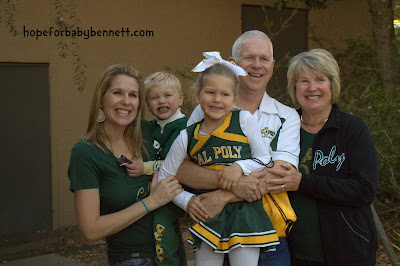 Then, we went into the game and Bodie got to walk out onto the field for the coin toss! 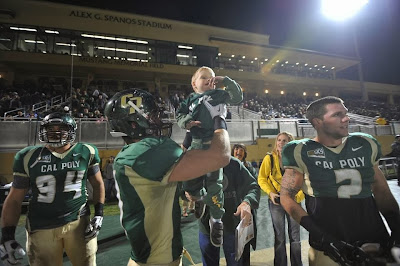 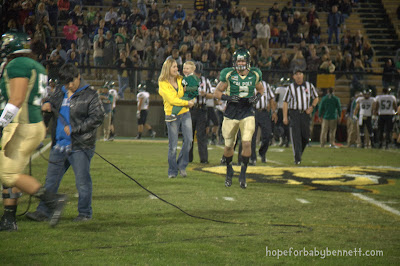 THIS was shown on the Jumbotron as they introduced Bodie. AMAZING. Again, I may or may not have had tears in my eyes. And Bodie thought it was pretty cool, too. 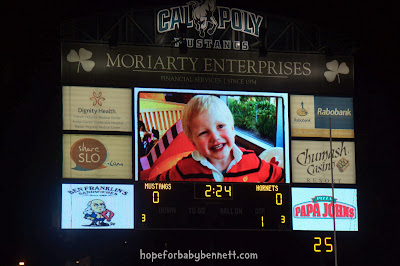 Bodie and I after the coin toss. They let him keep the coin, by the way! How cool is that??? 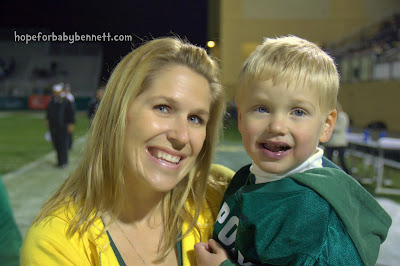 Bodie with "Musty," the Cal Poly mascot. He loves him some Musty. 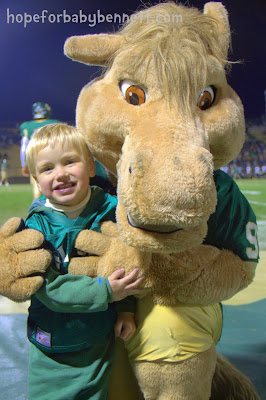 Bodie and Sierra with the Coach's wife, Jody. Jody is the one who made ALL of this possible. We are forever grateful for what she did for our family on Saturday night! 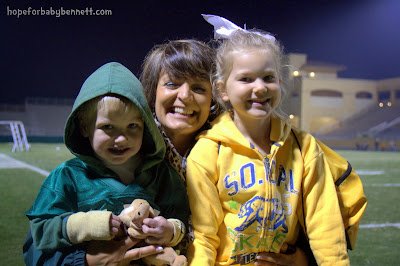 And the best part? Cal Poly kicked some serious tail on Saturday night, beating Sacramento State 42-7! I'd like to think it was a certain little honorary captain that gave them the inspiration to play so well! Bodie's buddy Cole scored 2 touchdowns! Bodie was pretty excited about that. :-)

Stay tuned for Part 2, where you see that Bodie wasn't the only one who had an AMAZING experience on Saturday night!!!

And, while you're waiting, please say a prayer for our little dude, who is now heading into day 4 of this stubborn fever, which doesn't look to be leaving anytime soon. Please pray we figure out what's causing it and can get rid of it for good!