The Dreams you dare to dream

Here's the thing about raising a medically fragile child. It's hard, some days downright impossible, to try to imagine the future.  When Bodie was a tiny newborn lying in a hospital bed, recovering from open-heart surgery, and having so many complications, I couldn't see past the next 24 hours, let alone the weeks and months after that. Even once he ultimately did come home and started to thrive, even then, I didn't let myself look too far down the road. I don't think I ever bought clothes bigger than the size Bodie was currently wearing until he was close to 2 years old. It's hard to explain why. I'm sure it was just how my mind dealt with such a staggering medical condition.

I never dared to dream of things like walking, and running, and going to preschool, let alone graduating and starting kindergarten some day. And, to a degree, I still don't think much beyond the stage we're at, which, right now, is a pretty sweet stage.

So, to hit another milestone tonight was pretty sweet. This was one Dusk and I never even imagined. But here we are. 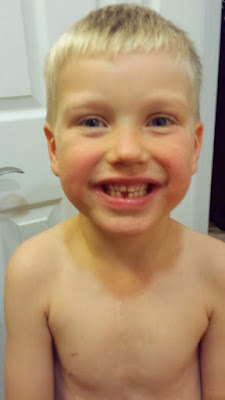 I get it, it's just a tooth. It's not that big a deal. Every kid goes through this. And I know I do have a penchant for dramatizing things. But, peeps, this IS a big deal. It's a childhood milestone. And one, by all accounts, we never knew if we'd even get.

So yeah, tonight was a pretty big deal in the Bennett household.

And, I might add, this kid pulled that sucker after only having it loose for a couple of weeks. I think Sierra's first tooth took months to come out - she was so scared of it. But not Bodie. This dude wiggled and wiggled, and took a few balls and lego boxes to his face unwittingly in the past week. And finished it off tonight. 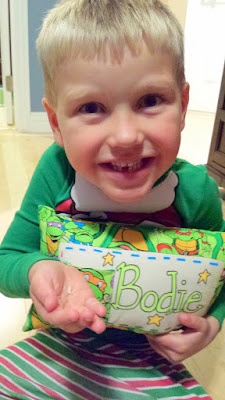 (A big huge thank you to Gigi Nancy and Popo Bill for the adorable tooth fairy pillow and the "Night before the Tooth Fairy" book!)

And so are we.

And, as an aside, losing a tooth when you're on aspirin is a whole nother Oprah. He kept asking me when it was going to stop bleeding. I just kept saying "I don't know, bud. Soon, I think…I hope?"