Old Man Bennett had a farm... 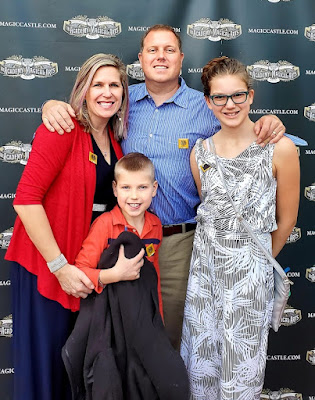 I can't believe it's been almost a year since I last blogged!

We moved from our very urban home a stone's through from Los Angeles International Airport to a very rural town in North San Diego County.

We moved on December 23rd.
Yes, 2 days before Christmas.
Because where's the fun in going through a hellish experience like moving if you can't do it during an already ridiculously stressful and busy time of the year?
As I always say, if there's a hard way to do something, the Bennetts will find it.

But I digress. The important thing is that we did it - and even got a Christmas tree! Grabbed it from Lowe's at 6pm on Christmas Eve! 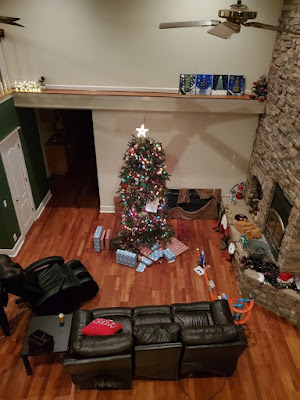 You now when you're out on Christmas Eve and you see some poor dude driving around with a Christmas tree on his roof and get all judgy and think to yourself "seriously, dude? It's Christmas Eve. I mean, why even bother at this point?" Oh wait, right. Me neither.

So we moved.
And we've been settling in, working toward our dream of a slower pace of life.

Allie, our resident 10 year old sweet rescue kitty caught a mouse less than a week after we moved in.
In our living room. 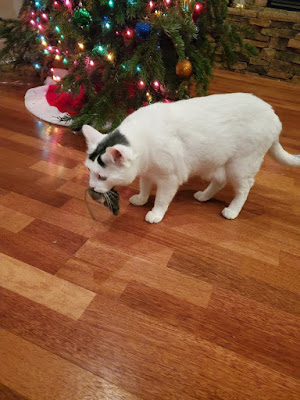 So we set out to get a barn kitty, to help with rodent control.
Except that we got a really adorable 4 week old kitten.
One who was supposed to stay in the cardboard box for a bit.
But ended up in our bed night 1.
And almost every night since. 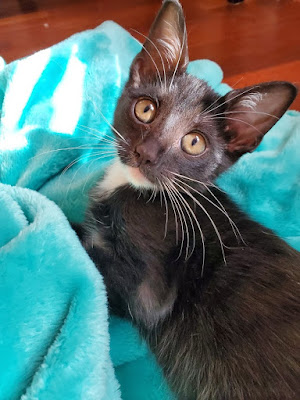 I mean, how cute is she??? Her name is Bootsie and she is adorable, and ornery, and just SO.LOVABLE. 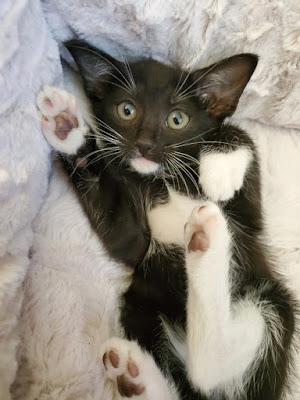 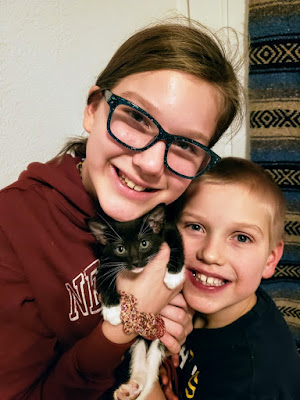 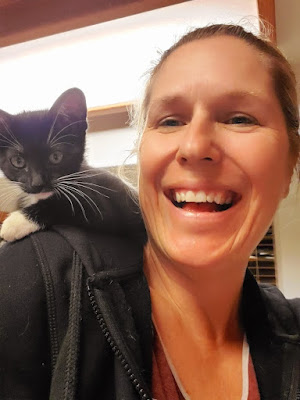 So clearly we need to get ourselves another barn kitty. Because this one's obviously an inside cat. Or maybe we need to get a mean feral cat who won't let us touch it? We're discussing it.

Next, we added 4 little week and a half old chicks. 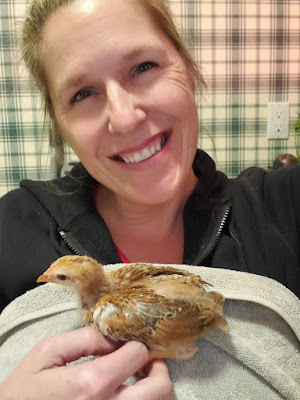 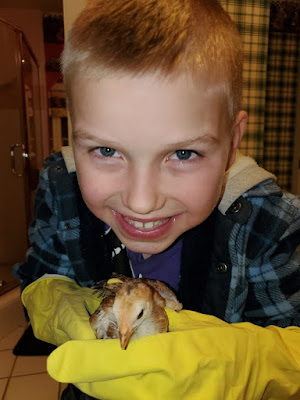 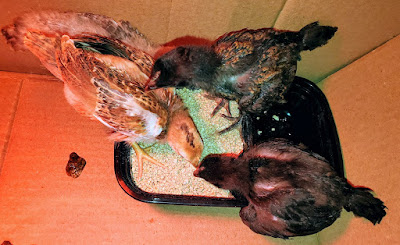 I can't ever remember their names. The kids named them and they're all some variation of Stars Wars characters with chicken themes. Like "Luke SunWalker" and "Obi-chick-nobe." That kind of thing.

So they pretty much chirp and poop. And spill their food and water everywhere.
And try to escape the box they're in. All.day.long.

The two most egregious escape artists. And they have no shame about it. 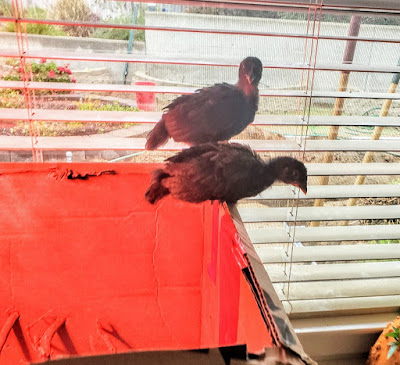 Maxi and Bootsie don't understand why we don't let them be in the room with the chickens. Maxi just wants to be their friends. Bootsie just wants to eat them for dinner (and isn't even pretending she's not thinking that.) 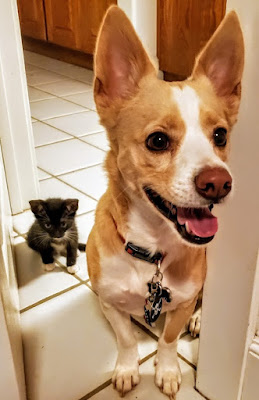 Can't wait to have a coop built and them to be old enough to be outside! And laying eggs. Or maybe just strutting around. Because we might have ended up with 5 roosters. Or 5 hens. It's anybody's guess. We won't know until they start laying eggs...or starting fights. We're really hoping for the former?

Goats are coming at some point.

In the meantime, Allie and Maxi are adjusting. They LOVE Bootsie. Maxi just wants to play with her all day - and Allie wants to clean her. And they all play together really well. We're super lucky! 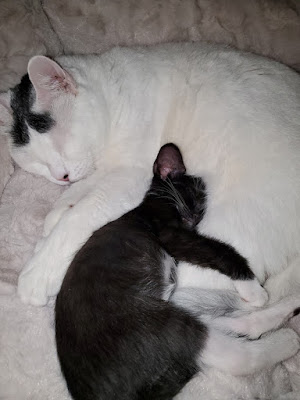 Maxi is loving being a country dog and just adores running wherever we let him on our 2 acre property. He gleefully realized yesterday that not only is he allowed to dig now, but we want him to go get those gophers! He is having the time of his life digging and running. 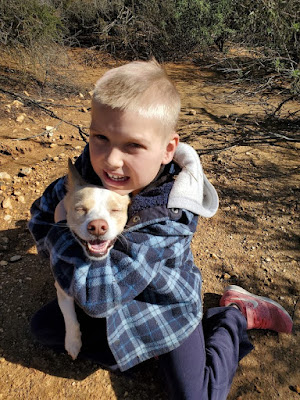 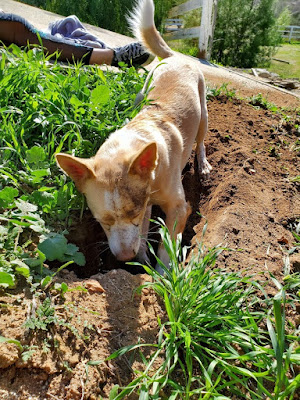 Kiddos are doing well with the adjustment. We were still going up to LA weekly to finish their classes up there, but that ended last week. So now, they're down in San Diego fulltime.

Sierra is growing LIKE A WEED. I mean, seriously, this kid. Won't be 13 until April, and is already 5'7.5"!!! She's grown an inch and a half in the last month alone! I'm still holding out for the last few inches I have on her (I'm, 5'10") - but she's getting dangerously close for my comfort! She had a hard time with the move at first (she had so many friends she was sad to leave behind), but seems to be hitting her stride now and starting to really like it down here.  We're so proud of how she's branching out to meet other kiddos here.

And Bodie is growing and holding his own, cardiac wise. We saw his heart failure team in December and his electrophysiologist last week. He continues to have a low BNP (measure of heart inflammation) and his function continues to improve, even if only slightly. He's doing so much better than we ever could have hoped 3 years into heart failure, and for that we are so very blessed! At his last appointment, he was riding his pacemaker 85% of the time, which is fantastic. He continues to have his care managed by his team at CHLA, with appointments every 6 months (and followups with the Stanford transplant and heart failure team annually). He loves San Diego and is already making friends. 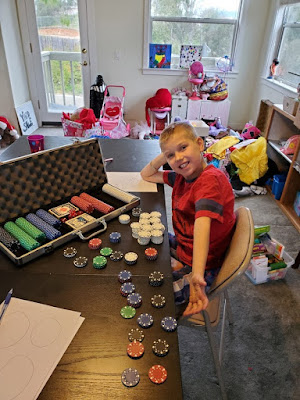 (Bodie has decided multiplication and division are pretty cool when you can use poker chips!) 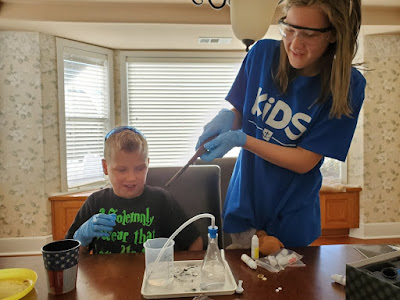 (Yes, Bodie's protective eye glasses are helpfully sitting ON TOP of his head as Sierra prepares to light carbon bubbles on fire inches from his (now completely unprotected) eyes. At least his hair won't catch fire?).

If you find yourself in North San Diego County, come visit us! We're about an hour or so south of Temecula, have wineries close by and have lots of space for guests!
At some point I'll post pics of our new digs, but for now, I'll leave you with this. This is the view out our master bedroom window. Almost every night. 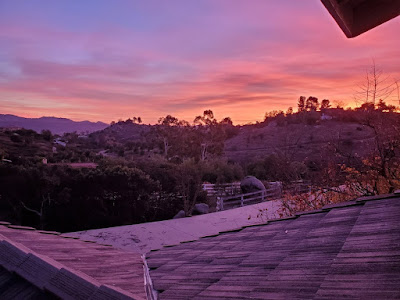 We love our home. We love our town. Many times since the move I have stop to looked around and think to myself "How did we get so lucky to get to move here???"

We are feeling so very, very blessed.