Bodie is getting his pacemaker replaced next week, and we're all gearing up for surgery. He's had this pacer since his Fontan surgery, so going on 9 years now, and the battery is D.O.N.E. It should be a relatively straighforward procedure and he should go home the same day, but with these cardiac kids, you just never know what to expect. So, like I said, we're all a litte uneasy and focused on his upcoming surgery.
And then, Dusk's cardiac team at UCLA called this morning and asked what he was doing last Friday between 5 and 6pm, because evidently, something had interfered with his pacemaker and it had just stopped for a few seconds. For a dude that relies 100% on his pacemaker, that's not a good scenario. Their suspicion was lead failure. So his team let us know in no uncertain terms that they wanted him at UCLA immediately, and he was not to drive there himself.
So, Bodie and I packed up the schoolwork we were working on, Dusk packed a bag to stay the night, we found someone to take care of our 8,000 animals, we picked Sierra up from school and we were on our way. We were up at UCLA by around 2:30 and after interrogating his pacemaker and doing a few other tests, they were able to confirm that the lead is not communicating with his pacemaker. And the malfunctioning lead is the sensing lead, the one that tells his ICD to discharge because some big, bad awful thing is happening. His pacemaker needs to be replaced as soon as possible.
His team admitted him and got him on the schedule tomorrow (Wednesday) afternoon at 1pm to replace his pacemaker.
Talk about stealing Bodie's thunder.
Apparently, Dusk's pacemaker heard Bodie was getting replaced and jumped in with "oooh!!! Ooohhh! Me first!!!"
So there you have it.
Unplanned drive to LA.
Unplanned hospital admission.
Unplanned surgery. 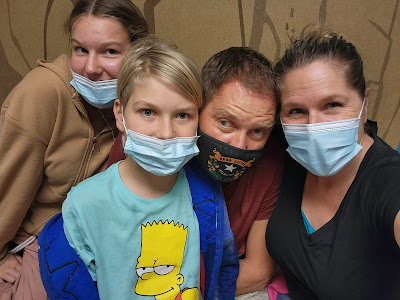 But I got to say, I'm so proud of the kids and how they just rolled with it. Not one complaint. Dusk's awesome cardiologist (who actually happens to be a pediatric electrophysiologist who also sees adult patients), upon hearing that CHLA won't let Bodie keep his pacemaker when they remove it next week, gave him a sample pacemaker to take home! 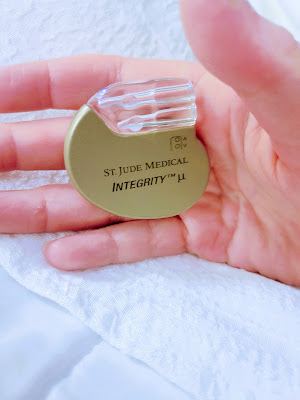 Bodie was over the moon to get it.
I looked over to see Sierra taking a picture of him holding it and then texting her boyfriend's mom, saying that "It's not super major of a surgery. They're just going in through his chest"
You know, just another Tuesday for the Bennetts. 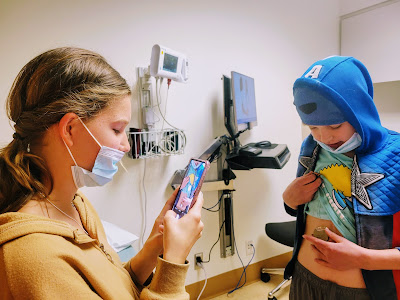 Clearly, we've done a better job of normalizing all of this than we realized!
So, to recap, crazy day.
Dusk is in the hospital.
Kids and I are staying in a hotel tonight and hope to see Dusk tomorrow morning before his surgery.
And the surgery isn't that big a deal because at least it's not open-heart surgery.
What can I say? Our bar is a pretty high for a surgery to be considered a big deal. :-)
We covet your prayers for an easy and smooth surgery - and that we're all home tomorrow night, safe and sound!