A king and his court

Sigh...The good news is that we made it to Tahoe. And Bodie is tolerating the 6,000+ ft altitude quite well. For you pulse-ox junkies out there, he's been satting 78 most of the night and just jumped to 84 the last time I checked. For a kid that hangs out in the high 70's and low 80's at sea level, it's pretty extraordinary for him to be satting so high here. We're so grateful!
But the vacation itself. Aye yay freaking yay. I know I should sugar coat it for the blog (and Bodie's baby book) and say it's been the most amazing family vacation ever, full of beautiful moments of bliss and happiness, making lifelong memories with our 2 perfect little children. And that is all true. But I just can't bring myself to stop at that. Let me make one thing clear - Dusk and I LOVE our children. We feel so blessed that they are both happy and thriving and know how lucky we are to have both of our children with us. But I don't know if parents of more than 1 child have been lying to us this whole time or if we just have bad luck, because this seriously has been the worst.vacation. ever. We're trying to find the humor in it (and remember that someday, we will look back and laugh at this vacation), but it's been tough. Here's a little rundown of the vacation so far:
First off, it got delayed by a day because Bodie caught the stomach bug that I had last week. He was sick for about 4 days, and after 2 days of diahrea and vomiting, we just didn't feel right pushing him at altitude, so stayed at home an extra day. He seemed much better Friday, so we thought we'd be safe leaving town. And we totally were...until he puked. all over his carseat. 90 miles from home. With 2 hours still to go. And that was after we had already stopped once because he wouldn't stop screaming. 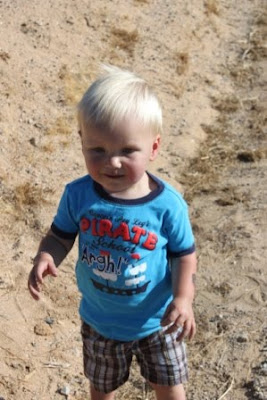 At least he thought it was awesome to sit by the side of the road, watching the cars whiz by, while I tried to clean his carseat out. With wipes. Because I had not planned well enough ahead to bring towels and water. 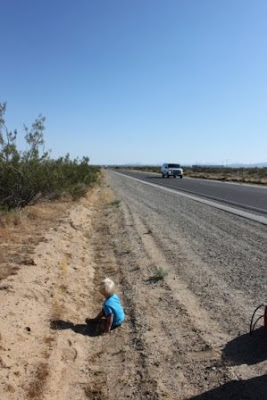 The next 2 hours consisted of him screaming, me turning around (Dusk driving), trying to figure out what he wanted, handing it to him, him shaking his head furiously and then angrily throwing it back at me. Honestly, I felt like a court entertainer who had been thrust in front of the king to try and entertain him. If I guessed right, I was rewarded with a smile and a laugh. And if I guessed wrong, I was punished with a sippy cup thrown at my head at mach speed followed by more screaming. Hence, my title - a King and his Court. All of this was punctuated by episodes of him gagging and me yelling at Dusk to stop the car, getting Bodie out quickly, only to find him laughing and giggling once we got him out of the car. Turkey. Fun times.

We finally got to our hotel in Bishop, stopped by the laundromat to wash the aformentioned carseat and clothes, and then headed to dinner, during which Bodie refused to eat anything and insisted on walking around the restaurant and throwing everything possible on the floor. Got back to the hotel, where I gave Bodie his meds, which he promptly threw up all over the floor. Super fun times. Finally got the kids to bed, only to wake up to bedbugs this morning. Like, I said, awesome vacation, right?

Today, thankfully, was better - Bodie was a slightly happier dictator, and without the threat of barf hanging over our heads, we were able to ignore his screaming somewhat, which actually worked pretty well. Once he realized he couldn't manipulate us, he calmed down considerably. ;-). We stopped by Popo Alan and Grandma Jan's house for pizza and lots o' toys - the kids had a blast. 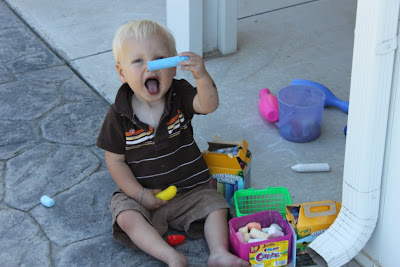 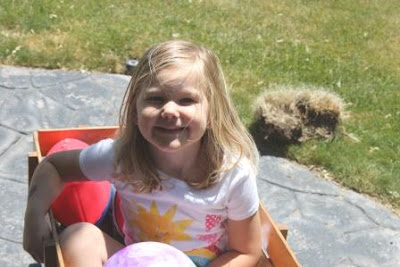 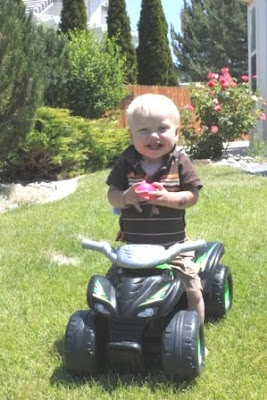 Then, we made our way to Tahoe, where we'll be as long as Bodie can tolerate it. He seems ok with the altitude so far, which is surprising, because the kid is OUT OF CONTROL moving nonstop. It's so fun to watch. All he wants to do is climb. We're in a 3 story condo and he is obsessed with climbing on the couch and going up and down the stairs. Oh, the meltdown temper tantrum that ensued when we put the gates up at the top and bottom of the stairs was unreal. Boy does this kid have a temper! ;-) But all in all, we are SO relieved to be here and enjoying ourselves: 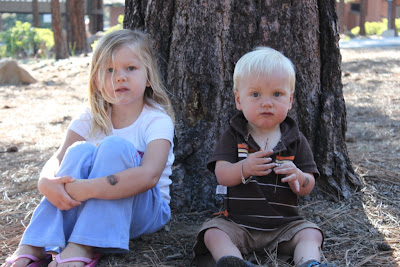 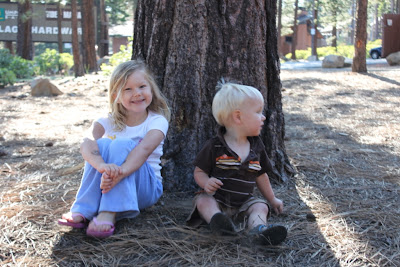 So I know this was a long-winded whine. I'm sorry about that. I suppose it would've been easier just to say that this is feeling eerily reimiscient of a Griswold vacation. But that wouldn't have been as much fun to read, right? ;-) Hoping and praying for a more relaxing week from here on out.