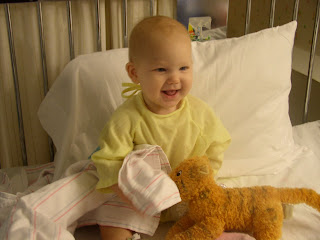 4 years ago, we were thrown into the craziness known as hospital life. Our sweet 8  month-old baby girl was sick, so very, very sick. She had been running raging fevers and crying for hours on end for almost a week (unlike Bodie, who, let's just say, tends toward the cranky side of the spectrum, Sierra was a HAPPY baby, so we knew immediately something was wrong). She would fall asleep in my arms and the second anything woke her up, she'd be crying in agony again. The doctors knew something was very wrong, but couldn't quite figure it out. In a matter of 4 days, they had run multiple blood tests, done a spinal tap, a chest x-ray and an abdominal x-ray. All that showed up was a significantly elevated white blood cell count.

Then, on December 21st, Sierra's pediatrician finally gave up. She had us admitted to the hospital for an MRI and said we weren't going home until we figured out what was wrong. Sweet baby girl was so sick she didn't even need to be sedated for the MRI. She just lay there quietly while I recited "Moo, Baa, Lalala" over and over again in  her ear. 2 hours later, we had our answer - pnuemonia throughout her entire right lung. They were baffled as to how she had managed to sound totally clear and not have any breathing issues and were amazed it had not spread. They started agressive IV antibiotics, but her fever continued to rage. By the next day, they realized why - the pneumonia was caused by staph, probably MRSA, given the magnitude of her illness. They brought out the big guns then, the crazy, icky IV antibiotics that blow your veins out and require new placements of IV's every day or 2. (Have to say, with what I know how, I'd have insisted on a picc line, but what can I say - I didn't know what I didn't know then.)

Within a couple of days, her fever broke and a day after that, she was 100% back to herself. But they kept us as long as they could, to run the longest course of IV antibiotics that they could, basically, until all of her accessible veins were blown. And so, 9 days later, they sent us home on oral antibiotics and we had to quarantine her for another 10 days. 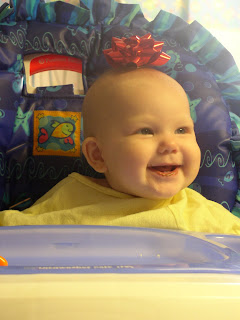 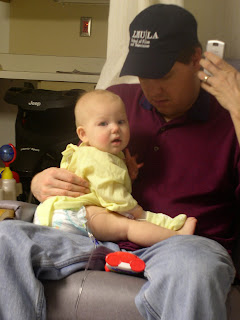 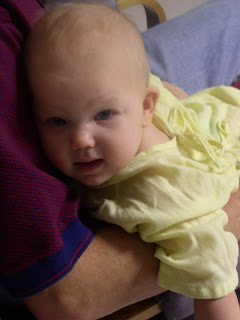 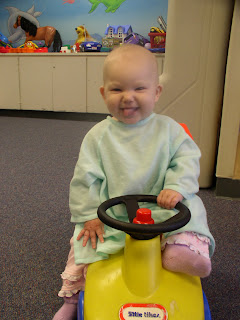 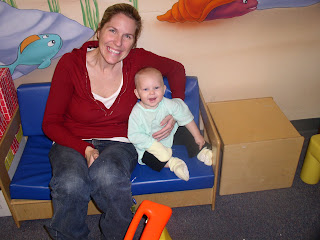 If you're counting, she was in the hospital December 21 through the 30th. Her first Christmas was spent in the hospital. :-( We walked into the hospital with all of the anticipation of Christmas in the air - and walked out to decorations all having been put away. Although my parents and brother, bless their hearts, brought Christmas to us in the hospital, Christmas truly sort of passed us by. Of course, this feeling would become second nature with Bodie, who spent almost every holiday between Valentine's Day and Labor Day of his first year in the hospital, but I'd never experienced it before. It was the oddest feeling.

We were blessed to get home in time for New Year's Eve (just in time to catch food poisoning from the pie we ate on New Year's Eve, actually - ah, fun times! Way to ring in 2008!). The whole experience was truly petrifying, not only for Sierra (who developed an apparently lifelong aversion to oral medicine as a result), but also for me (who walked in with Sierra and didn't leave the hospital until she was discharged) and Dusk (who wasn't allowed to stay overnight in the hospital, except on Christmas Eve - due to a ridiculous 1-parent rule). We were so scared we'd never get our little girl back. Praise God we did and she was totally fine - hasn't had a reoccurence (although we had been warned it might happen) and has been so healthy since then. But at the time, it was so frightening. We thought it was the worst thing any parent could go through.

Turns out, she was just the opening act. Sibling rivalry runs deep in our family apparently.