The Art of the Guilt Trip

I'm going to come clean about something. I feel guilty. A LOT of the time. I never realized that adding another child was a recipe for 24/7 guilt. Make that child a medically fragile child and the guilt goes through the roof. I now finally understand why moms specialize in the art of the guilt trip - turns out, we have so much guilt inside, it just comes spilling out, so we have no choice but to give some away. :-)

My guilt is generally triggered when I think about Sierra, when I think about everything she has to go through as a sibling of a medically fragile child.  For whatever reason, my guilt isn't focused much on Bodie, perhaps because he's so young he doesn't yet realize how different his life could be. I'm sure that'll change as he gets older. But sweet Sierra...it is impossible to explain to someone who hasn't walked this path. I suppose there is guilt involved even with all healthy children, but there is so much involved in being the sibling of a medically fragile child - how the whole family stops to focus on the ill child, and the siblings often get left in the dust, wondering what happened. I am constantly wondering "am I focused on her enough? Is she getting enough time and attention from me? From Dusk? Are we making sure she's happy? Is she feeling safe and loved all the time?" and the list goes on and on.

My newest source of guilt lately has been realizing that I kind of missed the boat on enrolling Sierra in sports. I don't know - I guess it just didn't occur to me that, at 4, she was ready for sports. And she's never really shown an interest, outside of the dance class offered at her preschool. And, well, we've been focused on Bodie for so long that it just kind of slipped my mind. Not a good excuse, since apparently every other parent on the planet realizes that 4 is the magic age for enrolling in sports, but, hey, it's what I got, so there ya go...

Anyway, I started seeing pictures of her preschool friends on Facebook, in their soccer uniforms...and their softball uniforms...and my guilt skyrocketed. NO Mother of the Year award for me, that's for sure!!! Well, this week I decided to do something about it. I enrolled Sierra in gymnastics and today was her first day. Oh.my.word. Can I just say that all of my guilt disappeared the first time I saw this smile? 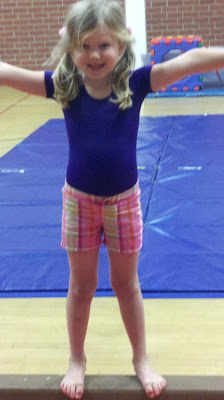 This girl was BEYOND ready and ecstatic to be in gymnastics! She had the sweetest face-splitting grin the entire class! And she did so well! I initially enrolled her in the 2-4 year olds, intending to put both kids in the class. What fun, right? Well, let's just say that Sierra's gymnastics experience was a smashing success and she's actually ready for the next class up. Bodie's, on the other hand? Epic failure. The kid spent more time running out the gym door than anything else (which of course made everyone laugh as I'd have to sprint across the gym to catch him). He had a great time climbing on top of and over everything - just never when they wanted him to. Suffice it to say, next week, she'll be in the 5-7 year old class...and he'll be in the Child Play area. ;-)

And, in other guilt trip relief, I enrolled her in swim classes 2 days a week. Ahhhh...feel that? That's just a pinch of the guilt slipping away. So nice...