When Bodie first came home from the hospital, he came home on 6 different medications. By the time he came home from his unplanned pacemaker surgery 4 weeks later, the med count had increased to 8 (Aspirin, Digoxin, Enalapril, Hydrocodone, Lasix, Propranolol, Reglan and Sildenafil), given multiple times a day, for a total of 17 syringes. Because of his paralyzed vocal cord, every single one of those syringes had to be thickened. That means I had to draw up each dose, shoot it into a little medicine cup, mix it with a little bit of thickener and then draw the mixture back up into the syringe. It was one of the many reasons interstage was so overwhelming for me.

I'm going to let you in on a little secret - Bodie is just a touch impatient. As in "I am totally not willing to wait for you to heat that bottle up, so just give it to me cold" impatient. And "I'm going to scream so loudly and persistently that you won't be able to concentrate on a single other thing until you give me what I want" impatient. So, faced with a kiddo who was so demanding and medicines and bottles that had to be very precisely drawn up and calculated, I came up with a system very quickly.

Every night, once the kids were in bed and the house was quiet, I would pump and then prep the next 24 hours worth of bottles and meds. I would put pumped breastmilk, the requisite amount of formula (to fortify for extra calories) and the requisite amount of thickener (all determined by a pretty complex formula calculated by someone who understands this stuff waaaaay better than me!) into the blender and let it go. When it was fully mixed, I'd pour it into a large lidded jar in the fridge and then bottle off whatever I needed throughout the day. That way, when Bodie was hungry, it would literally take me 5 seconds to go to the fridge, pour a bottle and feed him. Saved me MUCH frustration and listening to him scream.

I took the same approach with his meds. I would take all 8 bottles of meds and 17 syringes, a medicine cup and a few packets of thickener. I'd sit at our little round table in front of the tv, catching up on my shows and mixing meds. Once they were prepped, the syringes were labeled and put in either a divider in the fridge or on the counter (depending on whether they were room temperature or fridge meds). The entire process took about 30 minutes a night. Then, the next day, when it was time to give meds, it was as simple as grabbing a prepped syringe and popping it in his mouth. It was super easy to look and see whether a particular med had been given (you'd be amazed how hard it is to remember anything at that stage in the game) and I wasn't having to worry about human error caused by prepping meds with 2 kids needing your attention at the same time.

Over the past 2 years, we've slowly worked our way down on those meds, both on the frequency and the dosages. It got a little easier as we slowly dropped meds off the schedule entirely. It got a lot easier once we were able to lose the thickener. By the time we got to this summer, we were down to meds only 3x a day -

Although the med count is much lower and I could probably prep and dispense meds on the fly, I never got out of the habit of prepping them at night. I still prep them once the kids are down - it takes me a few minutes now, but it's still an ingrained part of my evening routine. And then I always give Bodie his last syringe right before I go to bed. I give it as a "dream feed" - without even waking up, he sucks it right down. Most nights, I can also sneak a toothbrush in to try and get the sugary meds off of his teeth!

I'll be honest, this is still a hefty load of meds for your typical hypoplast - most that I know are only on Enalapril and aspirin at this stage in the game, and maybe a reflux med. But we all know Bodie likes to be challenging. :-)

So why I am I giving you this really detailed history? Because today was a BIG BIG day for us. And you can't understand how big until you see how far we've come.

As I mentioned earlier this week, we lost the Sildenafil (which he seems to have done great with, thankfully). Today, we took the next step - we switched him from Propranolol to Atenolol for his fast heart rate. This is big for 2 reasons - the first is that Propranolol was 3x a day, but Atenelol is only 2x a day. This means that all of his meds are now 2x a day or less. The second is that Atenelol isn't available in a liquid form, so we had to get it in tablet form. I had anticipated that I'd have to crush it and mix it with his Enalapril, his last remaining liquid med at this point.

But, no. I figured I'd let him try and take the tablets as-is. He tried and told me it tasted "yucky." I told him to drink his milk afterwards, that it would take the taste away. So he did. And did it again at dinner like he'd been doing it forever. Bodie, our little amazing 29 month old fighter, is now taking tablet meds no problem whatsoever. I am floored. These aren't even "chewable" - they're small, but they're adult tablets, designed to be swallowed. I haven't tried them, but c'mon, they can't taste good. But he took them! This kid is so amazing.

So, our med schedule now?

And that's it! 4 meds. 2 syringes. 4 little half tablets. That's it. Seriously, people. This is HUGE. He takes it all (including his syringe meds) by himself. I don't have to prep meds anymore!!! (I think I can handle drawing up 1ml of Enalapril with him stealing my attention - and it sounds like we'll be switching him to tablet form of that before too long as well.) Seriously - no med preparation at 10pm at night! And no remembering to give him his meds before I go to bed at night! Can you say FREEDOM?!? Seriously. First time in almost 2 1/2 years that I'm not prepping meds - or administering them before I go to bed. Whatever will I do with my time now?!? Maybe I'll actually let this little guy sleep at night now. :-) 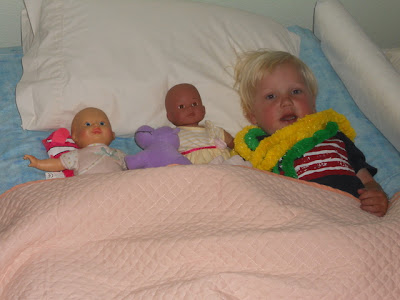 So proud of him...and of us...for making it to this point. (Yep, we know this will all change come-Fontan, so for now, we're going to enjoy this little bit of normalcy!)