We've been working on the concept of chores and allowance with the kids now...for awhile. Totally my fault...not theirs. I always start with the best of intentions, put up cool chore charts with stickers, etc. And the kids are TOTALLY into it. We do a couple of days of stickers and then...life happens. We're too busy a couple of days in a row, I keep telling the kids "it's ok - we'll do chore charts tomorrow" and the next thing I know 2 weeks have gone by, and the chore charts are a thing of the past. PLEASE tell me I'm not the only mom who does this...please?

Anyway, one of the times we started them this past Fall, Sierra and I went to Target to pick out what she wanted to save her money for. She picked out this super cute Snow White Doll. We took a picture of it and everything and she's mentioned it a few times since.

So, yesterday, what with the new year and all (and my new goal of living intentionally - more on that later), we got the chore charts going again. This time, I had the kids help me figure out what chores made the most sense - and they're pretty simple: Get dressed, make beds and brush teeth in the morning, clean up their living room and bedroom toys in the afternoon, and help with one dinner chore (setting or clearing the table, unloading the dishwasher, sweeping the kitchen, etc.) at night. Sierra also has homework and throwing out the bathroom trash on hers. We're 2 days into it, and still doing it...so I guess that's a good sign!

We also got caught up on all the partial charts I saved over the past 6 months or so. With their allowance, they get paid a dime for each chore completed on their chart. Once I pay all the dimes out they're owed, we count them out in groups of 10 - the first dime goes in their "GIVE" jar (to take to church on Sunday (for Bodie) or chapel at school (for Sierra), the second dime goes in their "SAVE" jar, and the remaining 8 dimes go in their "SPEND" jar. Sounds pretty simple, right? And it totally would be, were it not for Bodie grabbing random dimes out of the piles and Sierra counting alongside me. Have you ever tried counting a stack of dimes while one child is shouting random numbers at you and another child is randomly pulling dimes out of the stack?!? Fun times.

Anyway, when all was said and done, I realized Sierra had enough for her Snow White Doll! SO exciting! So we found 4 local Target stores who said they had it in stock (I tried explaining the concept of Amazon to her - but apparently, the fact that she could save some of her hard earned allowance by getting it cheaper from Amazon was outweighed by the fact that she could have it RIGHTTHISSECOND if she got it at Target. What can I say? She's definitely my kid.). It was super fun to take both kids with me into the toy section of each store to discover that the first 3 did not actually have it in stock. They had dozens of every other princess except Snow White. Seriously, is she just not that popular? Figures.

But we found it at Store #4 and sweet glory, it was even ON CLEARANCE (which probably explains why no one else had her anymore). So, Sierra had enough money left over to buy another little dolly and even one with a "Little Brother" shirt for Bodie. So stinking adorable. 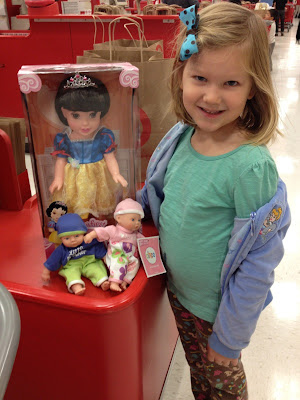 And mommy learned a life lesson today as well...it's best to hit CoinStar before cashing in your allowance...because people in the line behind you at Target watching the slowest cashier ever count out $30.52 in dimes aren't quite as impressed with your children learning life lessons as you are. Seriously, the guy counted more slowly than I did last night - and he didn't have kids shouting numbers at him and stealing dimes while he was doing it!!! Go figure... 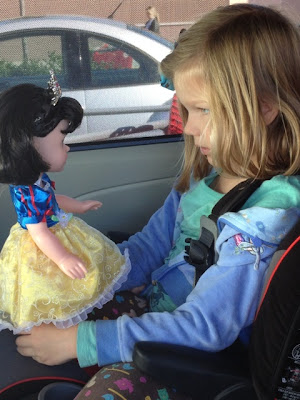 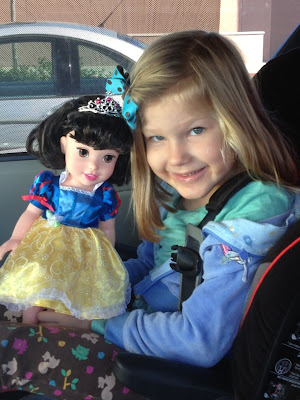 (oh, and my crazy carseat fanatic blog followers (because I am SO one of you guys!), these last 2 pictures were taken while parked, long before the car started - she was most definitely fully strapped in by the time we started the car!)

So proud. This is definitely one life lesson that was FUN to learn!