Whew. I just got back from a weekend in Cincinnati. Actually, "weekend" is a bit of an overstatement. More like 29 hours. Yikes.

On Thursday afternoon, I drove an hour north to meet my parents and hand the kids off to them for the weekend (bless their hearts, they actually VOLUNTEERED for this task - ok, I  may not have mentioned that both of them end up in bed with us most nights until I was literally handing them over to my parents - the little details, right?). Then, I caught the Red Eye flight Thursday night from LAX to Chicago O'Hare and then to Cincy.

Well, actually it wasn't so much the midnight flight. It was SUPPOSED to be the midnight flight. But what actually went down was a little different. We loaded onto the plane, all 800,000 of us (apparently, EVERYONE in the greater Los Angeles area had decided they NEEDED to fly to Chicago on Thursday night). We got all packed in like sardines, the doors closed and they asked us to turn off our electronic devices. THEN, the captain came over the intercom saying "Well, folks. I'm really sorry, but...I just broke the plane." (nervous laughter) "But rest assured, we're getting a mechanic out here and will hopefully get it fixed shortly." And this announcement came approximately 10 seconds after, thinking I was in the clear (on account of the closed doors and turning off electronics announcement) and anticipating a red eye flight, I had taken an Ambien. Fantastic.

45 minutes later, the pilot comes back on, saying "I'm sorry folks, but the plane can't be fixed. We'll need to deplane and find another plane." So, I got to deplane, stand around in the LAX terminal for an hour trying to reschedule connecting flights and wait for a new plane and then reboard said new plane...all while hopped up on Ambien, completely dizzy and disoriented. SUPER fun!

We finally left and I slept through the flight, waking up to hear our friendly pilot saying "Well, folks, we're over Chicago now! But, unfortunately, a light dusting of snow has just started, so they've asked us to hold our landing and circle until they've figured it out." Wait, WHAT? Chicago, the city where it snows 6 months out of the year, is asking us to delay landing due to a "light dusting" of snow? Apparently so...we finally landed, and I had approximately 25 minutes to get from my American gate...to my new flight, which happened to be a Delta flight...in a different terminal. I don't know if any of you have been at O'Hare before, but it is freaking ginormous, with nary a people mover or tram in sight (of course, I suppose there could have been one, but with my Ambien stupor and all I just didn't notice it). So I was full out sprinting (which was super fun, given an injured knee due to a bad IT band), to get there and find out American had improperly issued my ticket change and Delta didn't have me on the flight! I was beginning to think someone seriously didn't want me to make it to Cincinnati! But, thankfully, 2 amazing Delta agents worked it out for me and I got on the plane in the knick of time for an uneventful last leg of my flight into Cincy and an arrival to the conference just in time to miss the entire morning session.

But you know what?!? It was 100,000,000% worth it, because the conference was AH-MAZING! It was a Learning Session of The National Pediatric Cardiology Improvement Collaborative (NPC-QIC), a collaboration of cardiothorasic centers nationwide working to improve the outcomes of children born with HLHS between the Norwood and the Glenn surgeries (the riskiest period for these kiddos). Imagine a room filled with cardiologists, pediatricians, therapists, nutritionists and nurse practitioners from 40 different centers, all working together and sharing information on best practices to improve the outcomes for these kids! Talk about  incredible!

And the best part is, they want parents to be involved. They didn't just invite us to sit and observe them in action (although, I'll be honest, I did a lot of that, too, because it was really neat to watch them and I learned so much!); they wanted us to be ACTIVE participants and sought out our input on a lot of different issues. When they did the parent panels and the questions just kept coming, it became apparent that the practitioners highly valued parental input, which was really amazing to see. I don't know that there's any other medical field quite like pediatric CT, where the practitioners are really turning over every stone and working closely with parents and other practitioners to get the best possible outcomes. I have never been prouder to be a part of this community. What a privilege and an honor to get to attend this conference!

One of the most fun parts was getting to spend time with the other parents there. I had the opportunity to meet and learn from 10 new parents I hadn't met before, which was really neat - and, of the 15 parents in attendance, 5 of us were from Sisters by Heart, so it was really a mini-reunion for us! 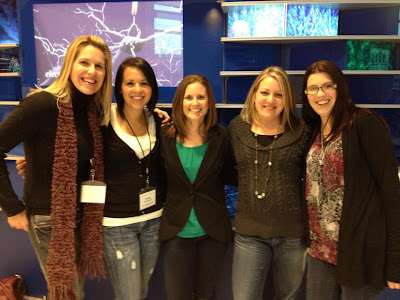 Kathy even bought her little guy, Jake on Saturday afternoon so we could all meet him in person! Jake is 6 weeks younger than Bodie and we have been following one another's journeys since before the boys were born, so it was extra special for me to meet Jake! 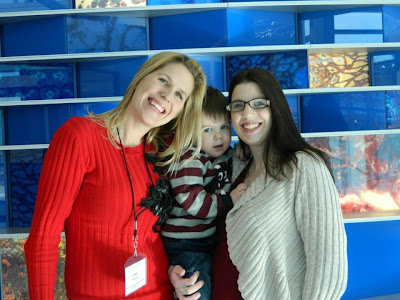 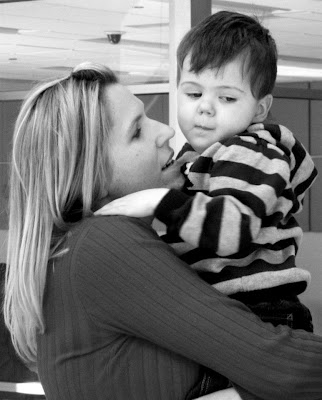 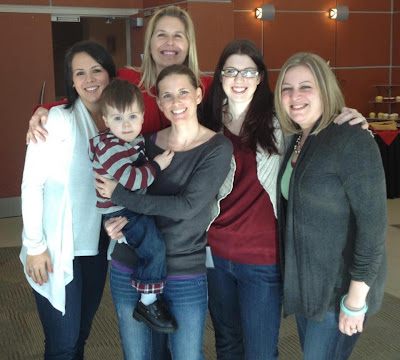 At the end of the conference, another fellow heart mom who lives in Cincinnati picked me up to take me to the airport and we swung by her house and I got to meet her fellow heart warrior, Milosh, his awesome dad Ned and his incredible sister, Bella. Seriously, this girl was so amazingly sweet. Once she warmed up to me (which took her approximately 1/2 a second), she clung to me and just let me hug on her. She reminded me SO MUCH of Sierra. I'm telling you, this girl's got a sweet, sweet soul on her. 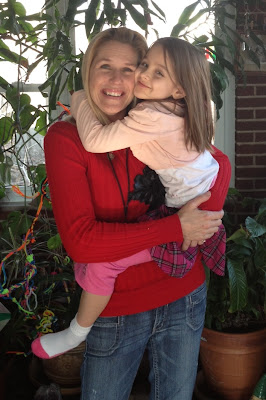 And Milosh, sweet, sweet Milosh. What an honor to meet this kid. His mom Brie and I had met in an online due date club, before we ever knew about our boys' special hearts. Bodie, of course, was diagnosed prenatally; Milosh was not quite so lucky. He was born with Barth Syndrome and related cardiomyopathy.  He had a heck of a first year and, literally, just in time, received a heart transplant at 9 months old. It was really neat to get a chance to meet him in person. What a strong little dude he is! 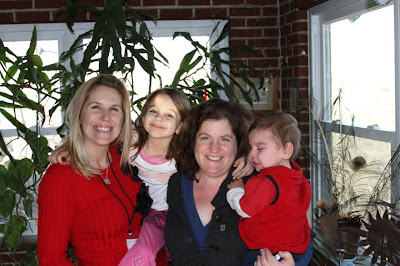 After meeting Brie and her family, I headed back to Cincy for a (thankfully!) uneventful trip home! I got home at 10pm last night and then drove 3 hours north this morning to pick up the kiddos from my parents - and then drove back home tonight. I.am.Beat. But, like I said, it was totally worth it!

And the kids? They did INCREDIBLE. We're talking sleeping through the night (without trying to sneak into Gigi and Popo's bed), eating super well (even Bodie), staying at the table until everyone was done eating, sleeping in late, the whole nine yards. And had a BLAST!
Getting ice cream for finishing their lunches: 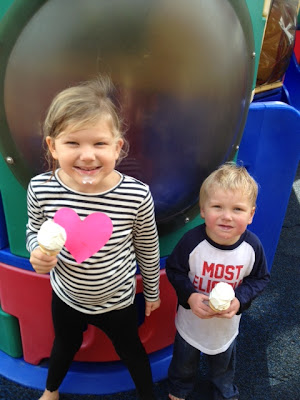 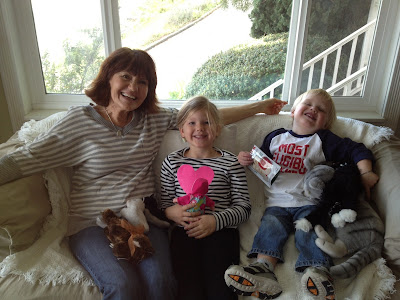 Grabbing dinner at Frank's before the first (of 2!!!) Cal Poly basketball games: 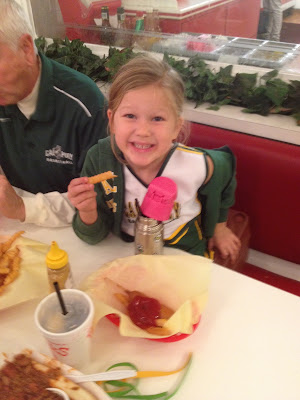 Grabbing lunch at Subway with Popo (Popo, apparently, was a BIG HIT with the kids this weekend, and had all sorts of fun things planned for them to do!): 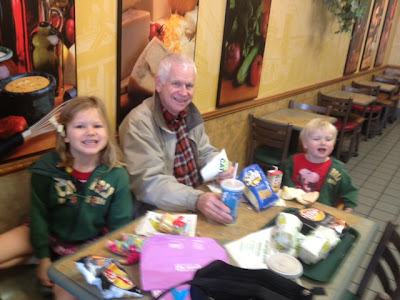 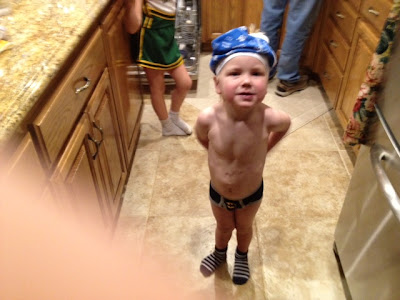 Thank you SO MUCH Gigi and Popo for taking the kids so that I could get away for a wonderful weekend!