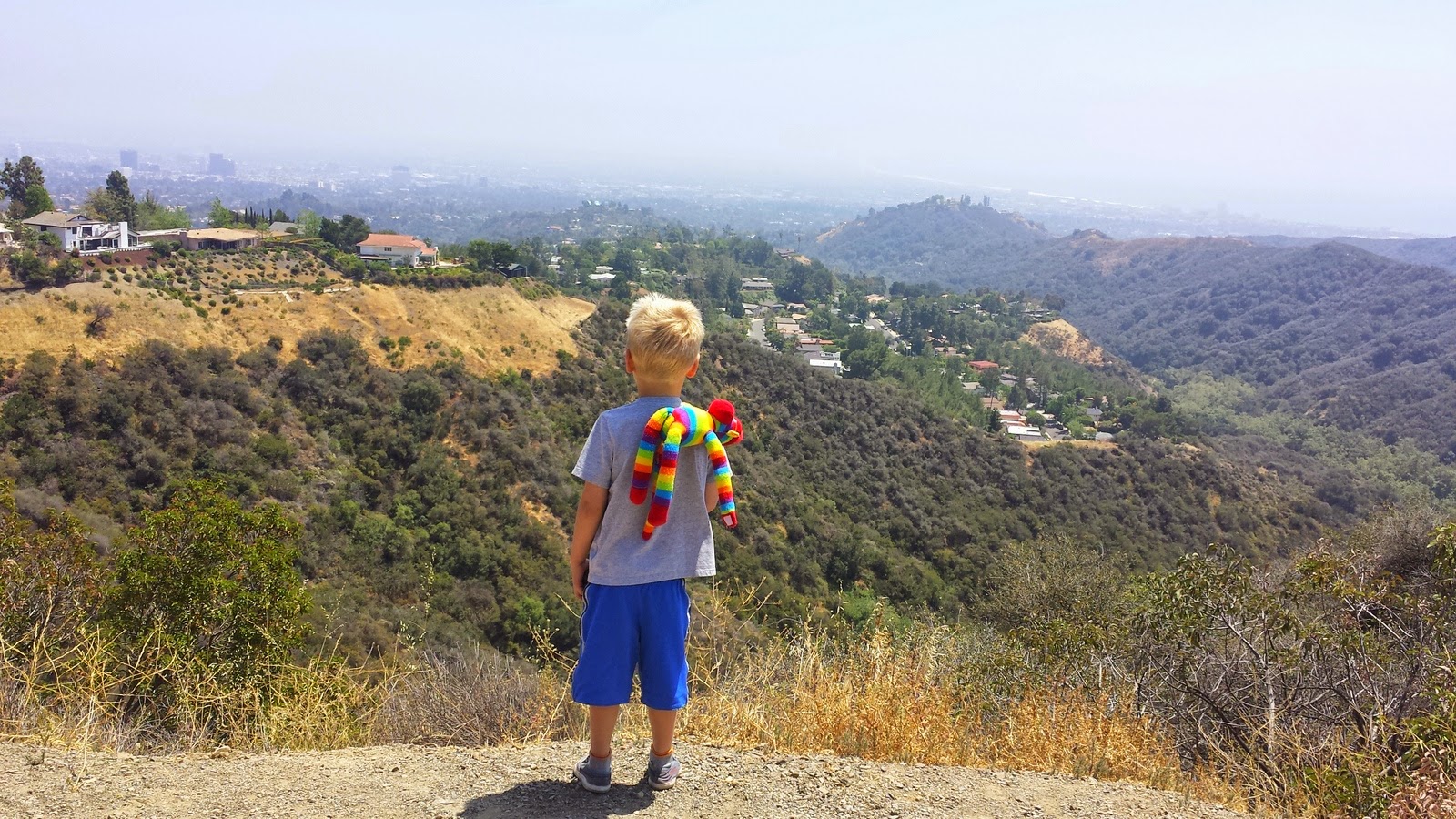 I think one of the biggest challenges in parenting a medically fragile child is knowing how far to push them. The simple answer is "as far as you can; they'll let you know when you've pushed too far." And, by and large, that is the approach we've taken with Bodie.

But, of course, as with all things in life, it's not quite that simple. At 5,  Bodie doesn't have the endurance of his peers. He just doesn't. I think my son is amazing and wonderful and has the endurance to do what he needs to do in life. But I'd be lying if I said he was "just like" all the other kids on the playground at preschool. He's never seen running around with the packs of boys. He's smart, and I think he's realized that he just can't hang with that. He gravitates toward riding trikes, where the differences aren't as noticeable - and to playing in the sand and on the jungle gym.

I've been thinking lately about his endurance. It's not due to low oxygen saturations anymore (his baseline is around 95%, which isn't that different than his peers) - and he's not really ever winded anymore (in that regard, his endurance has improved). It's hard to blame his current heart condition for his lack of endurance, not when I know other post-Fontan HLHSers who can run circles around their peers. I think it may be because he's just never been pushed to develop the endurance. For the first 4 ½ years of his life, his oxygen saturations were 75-85% of his peers. Every ounce of energy his body had was used up to keep his body running. It's only been in the last year that he's had any extra energy for other endeavors. So he's never been asked to build any endurance - we carried him if he asked, we slowed down if he needed it.

So, not only had his physical endurance not been developed, but he has a total mental block now on the physical stuff. He's scared of it. He doesn't THINK he can do it, so he won't even try.

But he's stable. It's time to start working a bit on building that endurance.
It's time to give him the gift of a little more oomph.
It's time to push him a bit.
Not a lot.
I'm not talking asking him to run a marathon.
But I think perhaps he's capable of walking on a mile long family walk instead of being carried. Or keeping up when we're out running errands. Instead of whining that he can't and dragging his feet.

So today, on this beautiful day, I took the kids on a hike. I started with Bodie in his Tula (an absolutely awesome toddler carrier that works GREAT for him (and is MUCH easier on my back than just carrying him!). 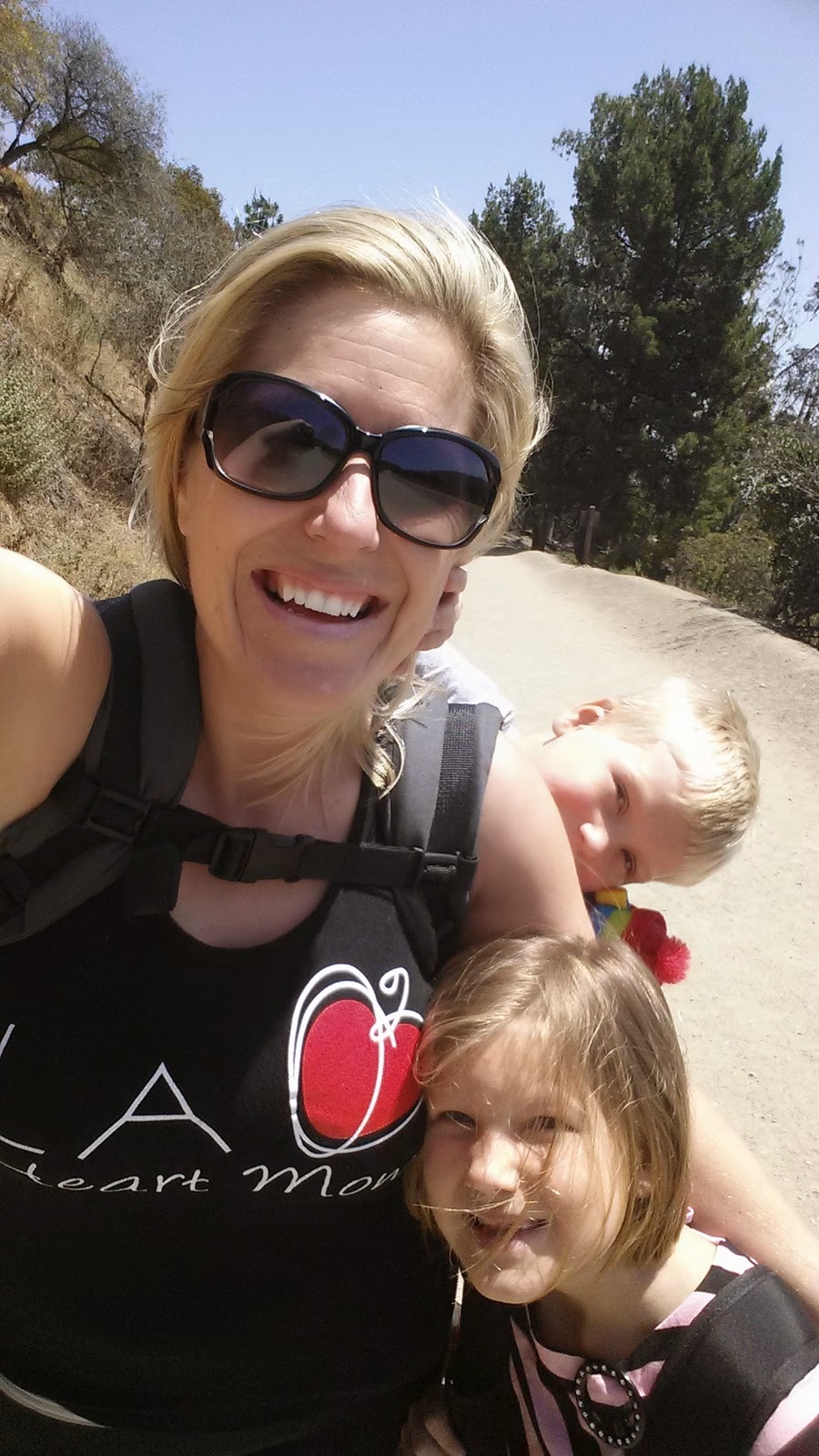 But then he wanted down to explore, so I put the Tula away.

And then we saw this. 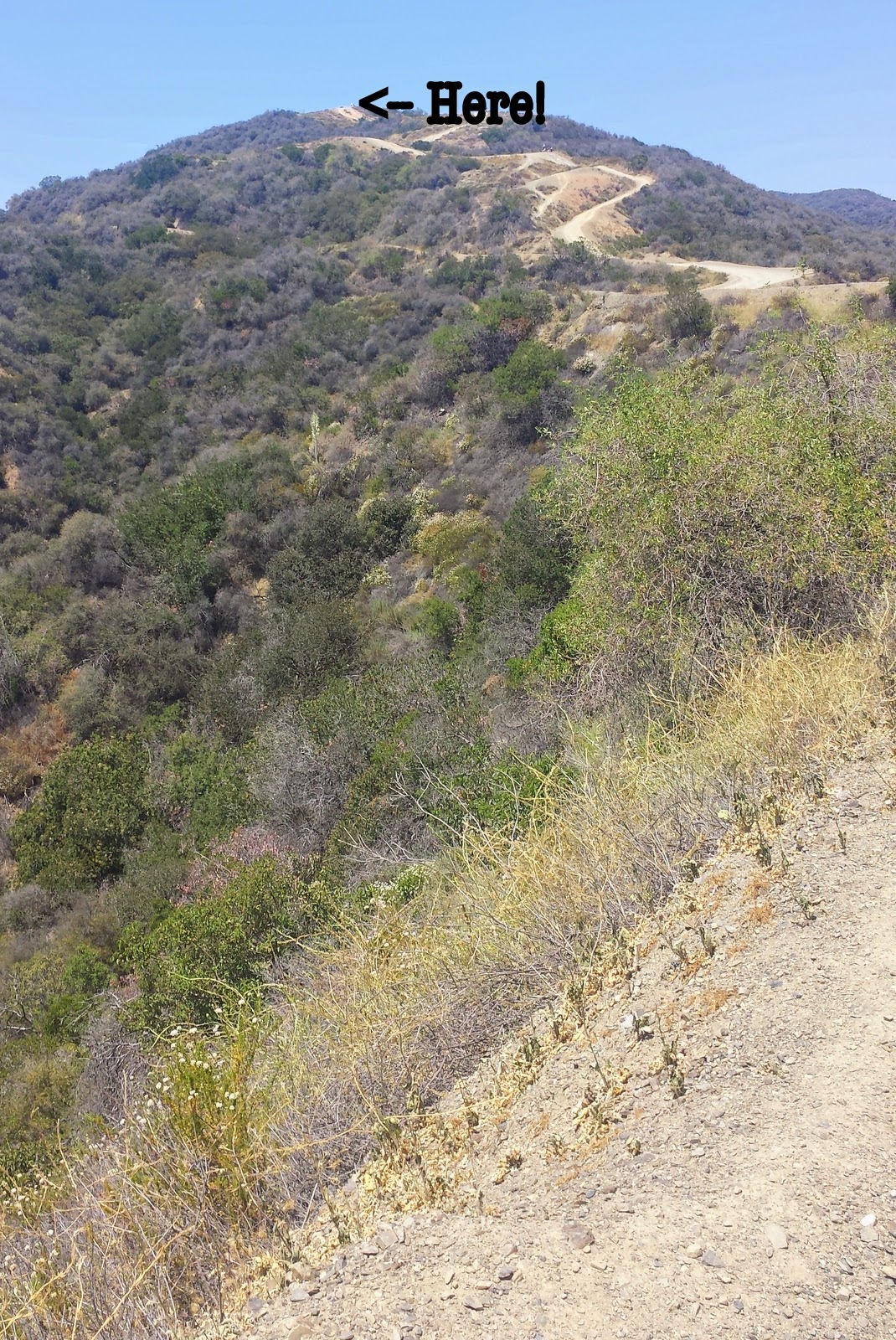 And decided collectively that we WANTED TO HIKE IT (it's not as far away as it looked - the picture just makes it look that way, I promise!).
I had planned on tula'ing Bodie when he got tired, but when we got closer, his energy was up and I realized he could do it, it wasn't that scary up close, and as long as we took breaks and let him go as slow as he needed, he'd be fine.

You can guess how he responded.
Acted like his legs didn't work.
Like he was totally incapable.
And that was on the flat part before the hill began.
Seriously.

So we took it slowly.
And it was about the first hill in as he's literally thrashing on the ground and screaming that he can't do it and I'm standing over him telling him to "Stop whining. Yes you can, we will take it slowly - you only think you can't" that I see a familiar face coming over the ridge…one of our favorite attendings from CHLA out hiking with his family.

O.M.G.
I'm sure he took one look at us and was like "Seriously!?!? This is why we save these fragile kids, so their parents can force them to do hikes they can't do??? What is she thinking???"

But here's the thing. Bodie CAN do it.

Bodie DID do it. 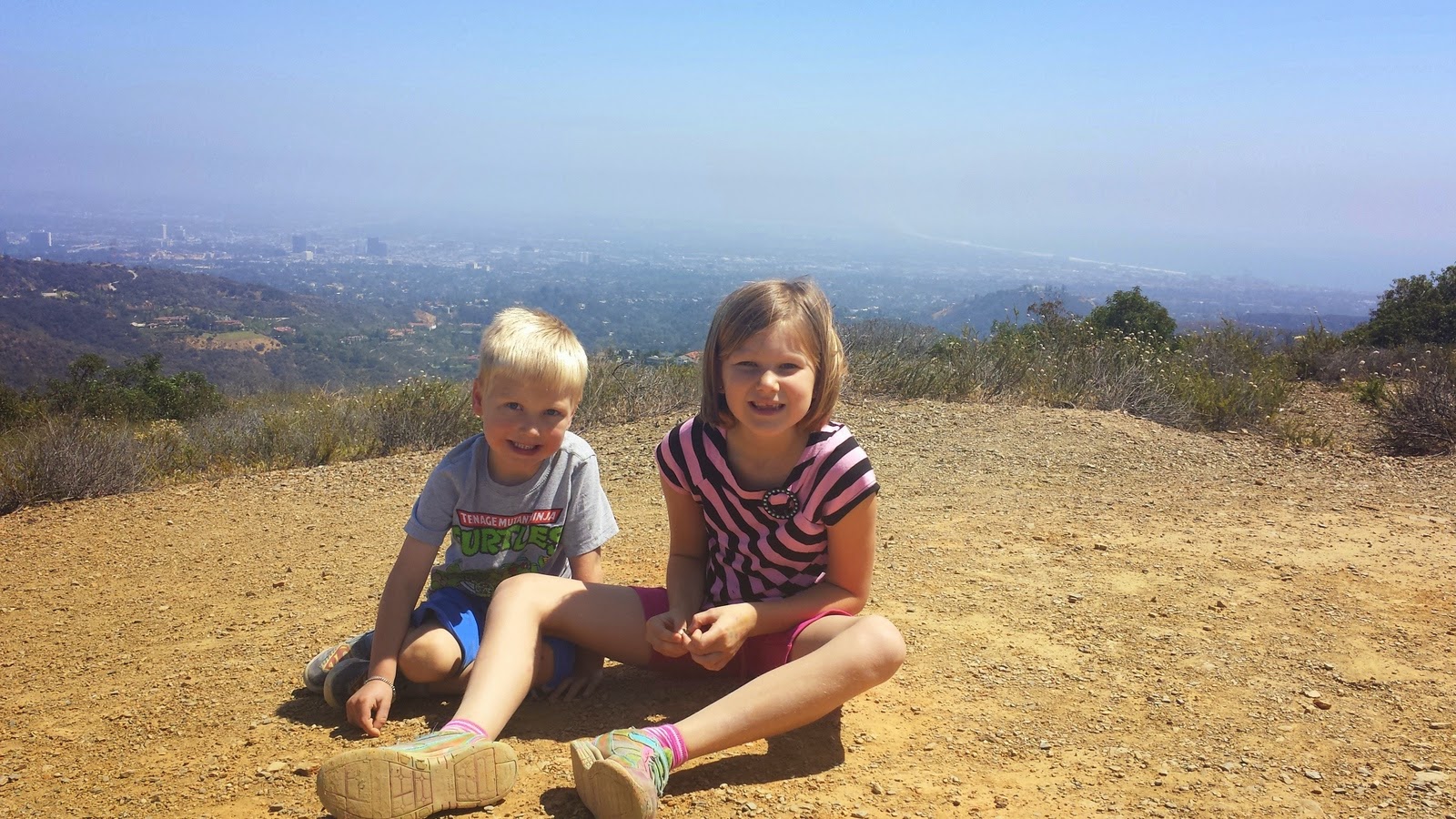 We ALL did it. 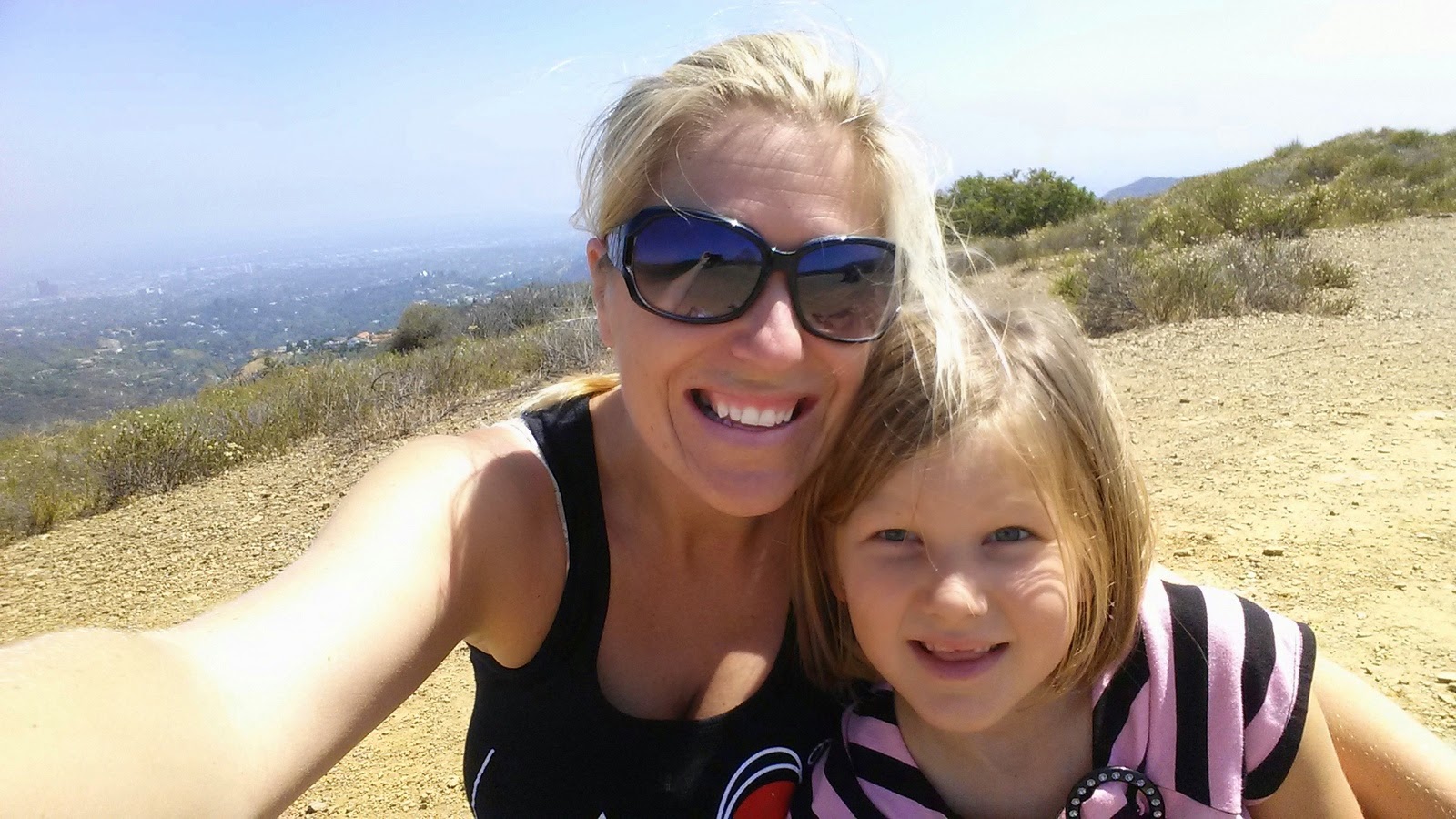 And darn it, if that kid wasn't SO proud of himself for doing it.

And ran most of the way back down, before I gave him a lift back to the car on the Tula.

And he can't wait for the next hike.

And we had a nice chat with the attending while we were out there.
I don't think he's going to call CPS on us.
I hope.