When my journey becomes his journey

If you've read my blog, you know I'm an open book. Blogging is my therapy. (and thank God for that, because, otherwise, with what we've been through, we'd have to take out a second mortgage on our house to cover my therapy costs.)

But I digress. Like I said, I'm open. I've openly blogged the good and bad parts of our journey.  I share our journey in the hopes that it can help others, inspire them,  give them hope in their own journeys. And I have a daughter just like me, who loves to talk about our hardships, our celebrations, how we're coping.

And I have a son not like me.
A kid who has a half a heart who would be totally cool with the world never knowing. 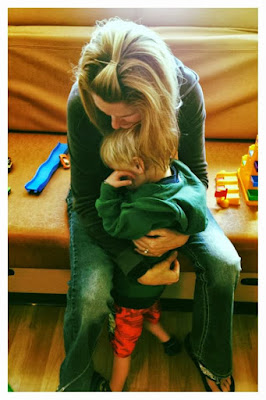 This sweet boy has such a big heart, but such a sensitive soul. And he hates being the center of attention.

So this week, before I asked everyone to wear red for him on Go Red! Day, I checked in with him, to make sure he was ok with it. And he was. And so I began asking people. And I had the awesome opportunity to speak before his school at Chapel yesterday about why we wear red on the first Friday in February and Congenital Heart Defects in general. Knowing how sensitive he is to being the center of attention, I tried to steer my talk to congenital heart defects in general, mentioning him a few times, but really trying very hard not to make it all about him.

Even so, he hid his face the entire time. And then told me afterwards

"I'm not wearing red on Friday."

Guys. His entire school is wearing red on Friday, for CHD awareness. But in reality, for him. Because for most of the kids, he's the first person they've ever met with a CHD.

My heart broke a little when I saw him hiding his face, and a little more when he told me he didn't want to wear red.

Of course he'll wear red.
Even if I have to bribe him.
Because the train has already left the station for this year's CHD Awareness Week. And the Bennetts are on it.

But my heart broke because I know why he reacted that way. Because he's shy. Because, already, at the tender age of 5, he doesn't want to be known as the miracle kid, the kid who has survived insurmountable odds to still be here despite 5 open-heart surgeries and countless other procedures.

Because he is all those things. And more. But he doesn't want to be defined by that. I knew this day would come. I have been warned of it by adult CHDers, by parents of older CHDers. That for a lot of kids (not all, but most), a day comes when they don't want to be a poster child for CHD. That they just want to be regular kids.
I just didn't expect that day to come at 5 years old.

But then, Bodie's different than most kids. He has very big emotions for such a little guy. I guess I would too if I'd been through what he's been through. So, our journey is changing a little. We're starting to hit the parts of the journey where I pass the baton to him, where it's less about me and more about what HE wants, how open HE wants his journey to be.

So, we (all 4 of us) are wearing RED tomorrow (and really hope you will too, for Dusk AND for Bodie, and for heart disease and defect survivors and angels worldwide), and we'll be putting together a video showing our supporters (so please send me your pictures, tag me in them, etc.!!!).

And at least 3 of us will be super excited to do so.
It may look a little like this. But we may not do it next year.

It will all depend on Bodie and where HE's at, and how HE is feeling at that point. So, if we're quiet during CHD Awareness Week next year, know it's because I've passed the baton to my son and it was his choice to be quiet about it.
(And that my therapy bills will likely have increased at that point.)