CHD Awareness Week can suck it

(sorry - not my most eloquent title yet, but it has been a very long day and it's where I'm at)

So…CHD Awareness Week (February 7-14) is right around the corner, and it's the time of the year that my Social Media feeds are filled with blogs and posts about Congenital Heart Defects. But CHD Awareness Week and I sort of have a love-hate relationship. When Bodie is in the thick of his CHD battle, I am all over CHD awareness week, posting like crazy, helping raise awareness. But, like everything else, as Bodie's personal journey ebbs and flows, so does my passion for CHD awareness. Some days I just want my kid to be a kid - not to be "the kid with a heart defect." I probably shouldn't admit it, lest I lose my heart mom cred, but hey, I'm only human. It is what it is.

Anyhow, this year, let's just say my passion had sort of ebbed. Ok, it had totally left the building. I changed my Facebook profile and cover pictures, and we're all wearing red on Friday, but that was kinda it.

And then this happened. 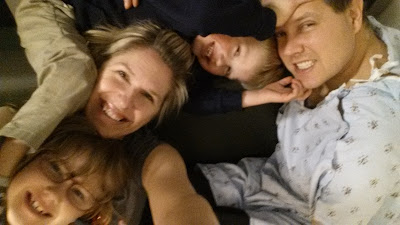 What? A cool, fun picture of my family? Sure, yeah. Except one of us is in a hospital gown…again.

Dusk had another cardiac event. Sigh. Apparently, it's disputable what the proper term is for what he had - some say cardiac arrest, some say arrhythmia, one of the EP's in the ER today called it a "sudden death episode" (like that is somehow nicer to say than "arrhythmia"). In any case, Dusk had finished exercising, was getting ready to start his day, got lightheaded, laid down, passed out - and his ICD fired. He was alone when it happened, so when he came to (based on the pacer read out strips, the episode lasted approximately 20 seconds from start to finish), he called 911 and they sent paramedics out. He emailed me and I got home in time to talk briefly to the paramedics and then they headed up to UCLA. I stayed home briefly to reschedule our day, make the necessary phone calls (to his cardiologist at USC to let him know he was headed to UCLA, and then to his old team at UCLA to let them know to be expecting him), etc. - and then met him up at UCLA.

Dusk spent the day in the ER and is now checked into a room in the cardiac unit. There's still a lot of unanswered questions as to plan of action going forward, but for now, he's under observation to make sure he doesn't have a reoccurrence. There has been lots of chatter about possible surgical options for him, but for right now, they're just that, chatter. We really won't have a concrete plan going forward until we talk to his cardiologist.

2. He was nice enough this year to have a heart attack on February 2, instead of Valentine's Day (I have to take my good news where I can find it).

3. His ICD worked appropriately (those of you with a medical background will appreciate knowing that his heartrate was over 300bpm, he went into VT, which turned very quickly into VF and then his ICD kicked in; it took one shock to get him back into a sinus rhythm).

4. The event was likely caused by his underlying CPVT.

5. The episode was not as long or as traumatic as the last one, thankfully.

6. Our family has a lot of luck - whether you consider it bad or good depends, I suppose, on your perspective. But I will say this - the kids and I took Dusk dinner tonight at the hospital so that they could see that he was ok, and I think we all felt very, very lucky. 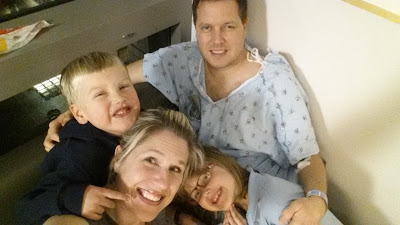 7. Our kids are really freaking resilient and roll with the punches better than anyone I know. When I picked them up at school, I sat them down and had to explain what happened. Their first question was "Can we go to the hospital to see daddy???" and they were totally excited to get to the hospital and have fun in daddy's hospital room, check out his bed, eat dinner in the window and check out the "city lights," try out the tv, etc. Bottom line is, these kiddos love their daddy and think nothing of seeing him in weird places like hospital rooms. I love them and their resilience so.freaking.much. 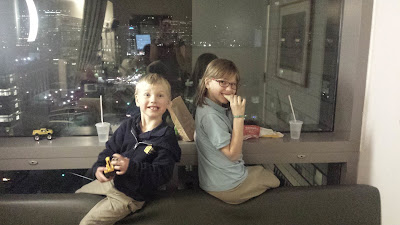 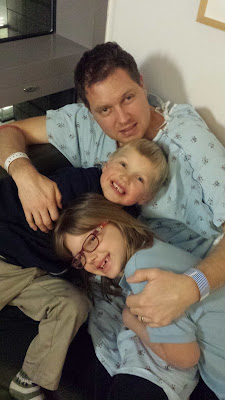 So where does this leave me with CHD Awareness Week?

Grudgingly grateful.
Grateful because someone once promoted CHD Awareness with everything they had, and wouldn't listen until someone else once put a ridiculous amount of funding towards it. Because of those someones, my son is alive and thriving, my husband is alive and thriving, and we as a family have a heck of a lot of HOPE for both of their futures.

Because, at the end of the day, CHD Awareness Week is about educating people, yes. It's about making sure everyone knows the warning signs, and what to look for in a fetal scan and in their high school athlete children. But it's also about getting awareness into the right hands, the hands of people who can fund research to create insanely awesome innovations like pacemakers and ICD's and conduits and heart transplants and artificial hearts. And both of my boys are depending on more innovations just like those. 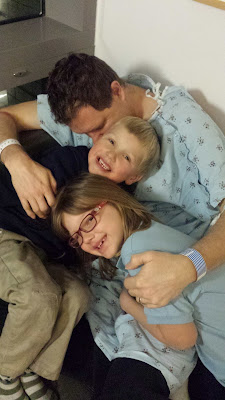 So, this year, CHD Awareness Week, we salute you.

But if next year you wanted to just let us have a February without any cardiac events, that would be cool, too.