I have a confession to make. Our kids don't have electronics. At 9 and 6, they don't have phones. And they won't be getting them anytime soon. They don't have iPads. They don't do gaming. They don't even have a kindle. We have one (yes ONE) "family iPad." It's actually dad's, but he let's us borrow it for really long doctor's appointments. And for hospital stays.

We have a TV, and we have Hulu for tv shows and DVD's for movies. We don't have cable. And (gasp), we don't have Netflix.

We have computers and I'm constantly battling my own phone addiction, but as a family, weren't just not that heavily into electronics. We didn't set out to isolate our children, for them to be social pariahs because they didn't know who Miley Cyrus is or the latest dance craze. It just sort of happened. Part of it is because we're just cheap. We're not buying the coolest newest phones for our kids when we don't even buy them for ourselves.

But it honestly has become intentional. We want them to be kids as long as possible. And there's just SO MUCH on the other side of technology, a whole new world they'll be spending the rest of their lives trying to navigate. Our kids have been through so much, had so much of their childhood taken from them, that if we can control this one little thing, why the heck not. Why not let them hold onto their childhood just a little bit longer?

Our kids like to watch movies, they will absolutely play games on my phone if I let them, and they love to keep up with their friends via mom's Facebook account. 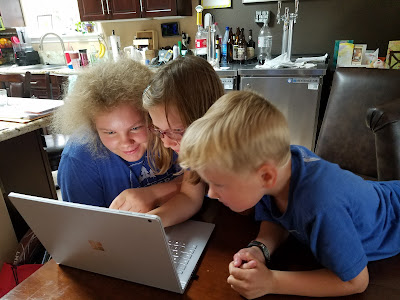 But, you know what happens when kids aren't given the first choice of electronics?

And their imaginations run wild. We are told all the time that our kids have really active imaginations and I think a lot of it is because they're not given technology as a first choice. When I ask my kids what they want to do, the answer is usually "play Legos, do art, play outside or read books." They can play for hours making up all sorts of scenarios. Last summer, we were listening to The Magic Treehouse on audio cd in the car, and the kids were constantly running around the house, pretending to be Jack and Annie on various adventures. It was messy, but super cool.

Today, we were at the park and they were pretending to be on a pirate ship, running all over and having me be their prisoner. 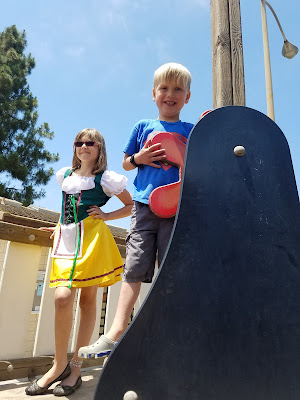 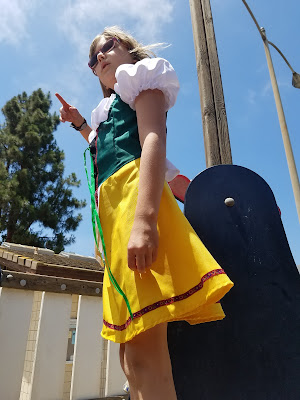 The really cool thing about giving less technologically savvy options is that the kids don't rely on them as much. Last summer, on our roadtrip, we brought our DVD player in the car, and the kids never asked for it. Not once. They just wanted to listen to the Little House on the Prairie series, which we were listening to as a family. And we got to talk about it, which wouldn't have happened if they had been watching their own movies in the backseat wearing headphones while we were listening to music in the front.

There is a time and a place for technology. Although we've started bringing Lego's to longer doctor's appointments instead, there are many times where the iPad is the only thing that gets us through hospital stays (there are only so many ways to entertain a young kid confined to a hospital bed). But we try to maintain a balance away from so much technology where we can. It is not easy, but if you're intentional about it, you can do it.

I know technology less isn't the right choice for everyone, but as we head into summer, I encourage to check out your kids' summer activities and figure out if there might be ways to spend a little more time outdoors, exploring - and a little less time in front of a screen. You never know what sort of magic might emerge. (And don't worry about them missing out on all the Miley Cyrus garbage - they'll get it at school anyway!)