The Mountains We Climb

As part of our epic road trip, we decided to take a detour to Yosemite. Dusk and I have been multiple times, and absolutely love it there, but the kids had never been.

When we got there, I thought for sure we were doomed. The only thing this one was excited about was the "Bodie sized stop sign!" 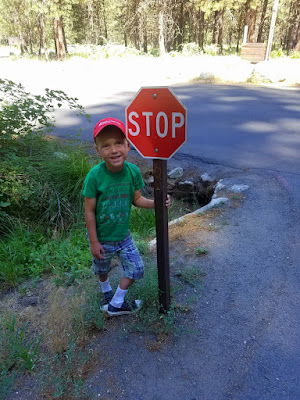 Other than that, he whined and moaned about walking around even the valley floor. I thought for sure we were doomed. But Dusk felt strongly that we should attempt a hike. I voted for an easy hike, like Yosemite Falls.

But Dusk was insistent that we try a "real" hike, Vernal Falls. 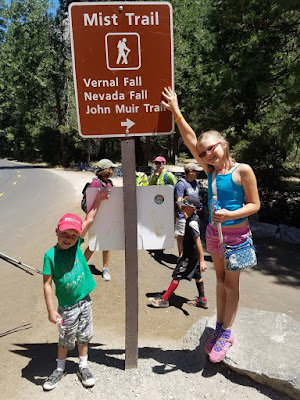 All I could say was "are you kidding???" 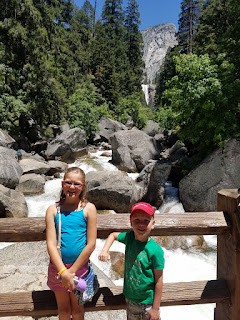 You see the top of that waterfall in the background of that pic? That's the top of Vernal Falls. If you haven't hiked Vernal Falls, it's not a hard hike per se, and it's not that long, but it's pretty much 1.5 miles straight up. The Yosemite trail maps call it "strenuous" and say it should take around 3 hours. but, if you can make it up, the views are pretty spectacular. Considering we couldn't even take a leisurely walk around the valley, I figured there was no way we'd get up to the top of Vernal. So we figured we'd go as far as we could get and call it a day. 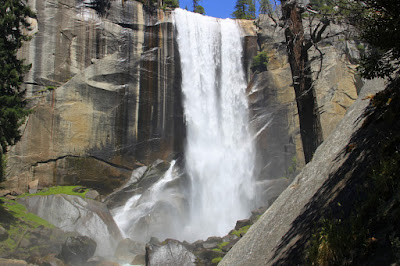 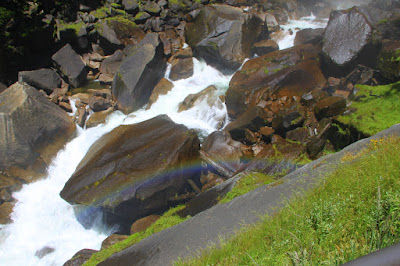 But wouldn't you know that this kid (who is always in the business of impressing us), and and the rest of us, made it to the top of Vernal Falls??? 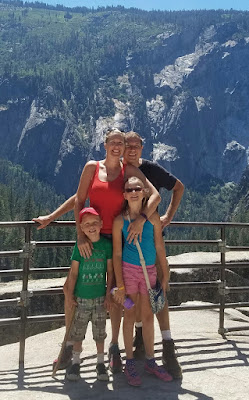 Granted, he spent some of the hike like this. 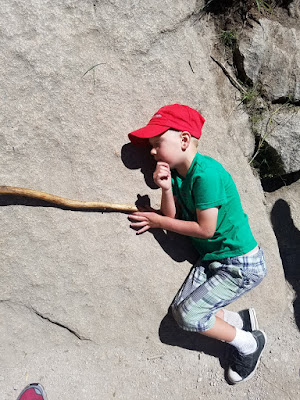 And some of it on Dusk or my shoulders. 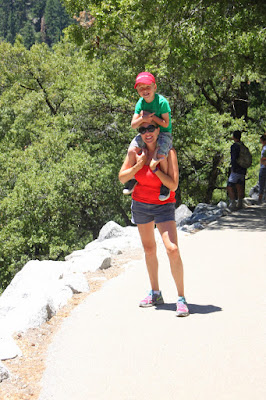 And we took an inordinate amount of breaks along the way. 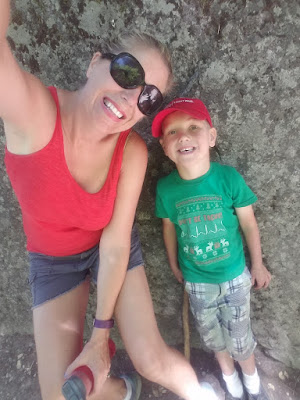 But, honestly, he hiked most of it himself. 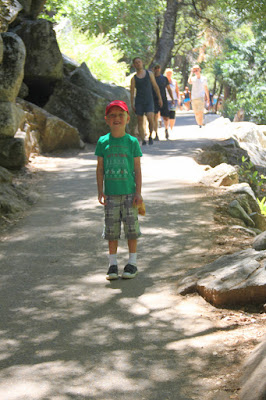 He got to the top and said "I MADE IT!!!" (He was apparently as surprised as we were.) 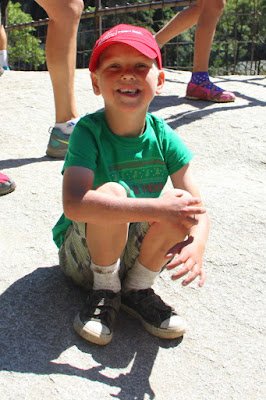 We could not be more proud of this sweet kid, with his half a heart and asthma and all, trucking along and hiking his way up what must have seemed an unsurmountable mountain. 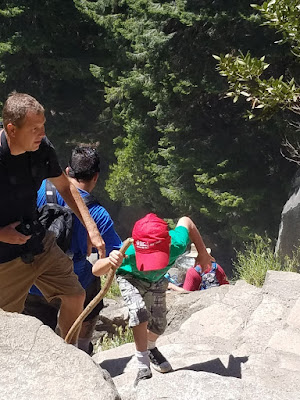 The really cool part is that, along the way, we met the sweetest group of high school girls out from New York as part of a camp. They ended up hiking alongside us for much of the hike and were pretty enraptured with Bodie. As they passed us, they would chant "Go Bodie! You can do it!!!"

At one point on the hike, as I overhead them talking about how Bodie was their inspiration, I gave them a little of his history. They were pretty impressed, to say the least. Bodie was so excited everytime he saw his "friends." At the end of the hike, one of the girls stopped to tell me that she was so impressed with Bodie, and with Dusk and I as parents, that we took him on a hike like that, to give him that experience. I honestly don't take the credit - I think it's more a function of his amazing medical team. They have always encouraged us to let Bodie live his life. We are so indebted to them for that encouragement.

And we are beyond grateful that Bodie is doing as well as he is physically, so that we can push him physically and give him these sorts of opportunities. Tonight, I learned of a sweet girl his age with his same heart condition, Helena, who passed away. I had followed her journey since she and Bodie were both babies. The sadness is overwhelming. These kids are so fragile. It is never lost on me that every moment we get in good physical health with Bodie is a blessing. 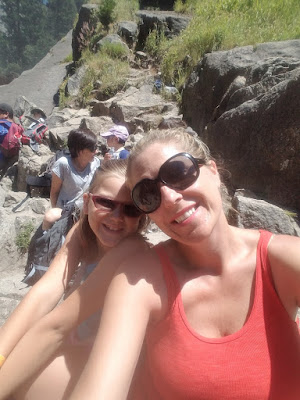 The reason I don't have many pics of her is that she was about this far in front of us the entire time - and that was only because we wouldn't let her sprint further ahead. 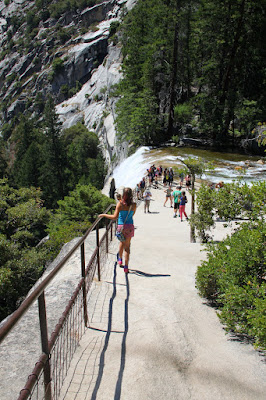 This girl. A born climber. Not one complaint (other than that we were all going too slowly). This girl has her daddy's genes, that's for sure.

This girl is going to be hiking Half-Dome someday. The only question is who will be hiking it alongside her - me or my dad (who has already hiked Half Dome multiple times!).

The moral of our story, if there was one, would be to let your kids lead the way. To challenge them, to never assume they can't do amazing things and inspire you.
Ours sure did.
I can't wait to see what they do next. 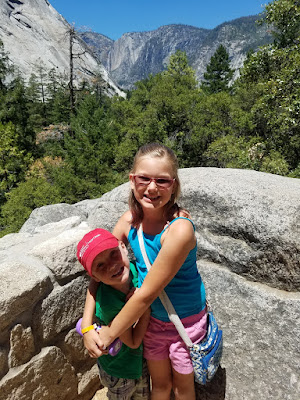 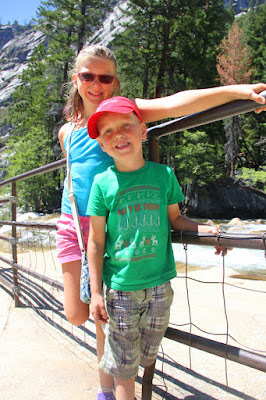