Making good on a promise

Right before Bodie was born, I made him a baby quilt. It was adorable, a mix of greens and yellows, since we didn't find out his gender until he was born. Sometime over the course of his first 5 months of life (almost entirely spent in the ICU), we lost that quilt.

Bodie did know now the quilt existed, or that it had been lost. Until last weekend when we had some friends visiting who were remarking about a quilt I had made for their (now almost 11 year old old!) son when he was born. In the context of the conversation, Bodie learned about his quilt and was devastated that it had been lost. When he suggested going back to the hospital to look for it, I suggested instead that I just make him a new one, and he could use it for this hospital stay. He was over the moon when I promised him that I would make him a new quilt for his next hospital stay.

Apparently, my son is like me - put an idea in his head and you better push it through to fruition as soon as humanly possible (preferably sooner). So I told him to go look through my fabric remnants and pick out some fabrics he liked. He did.

He came back with something totally appropriate...for a newborn baby. Think pastels, sailboats, duckies, rabbits. What can I say? I haven't quilted much in about 6 years. 6 years ago, my friends were deep in baby shower mode.

But baby fabrics weren't fit for a brave 6 year old heading into his 6th heart surgery. So I put out a call into my local mom's group and one super generous mom had tons of cool fabric Superhero scraps she sent my way! The entire front of his quilt was made from her scraps - all Bodie had to do was pick out a design (from the 5 I actually know how to do), and pick out fabric for the back and batting and we were good to go.

I finished it last night, a little less than a week after picking up the fabrics (and we had company in from out of town three of those days). Think that might be my fastest quilt yet. But this face was my best motivation yet. 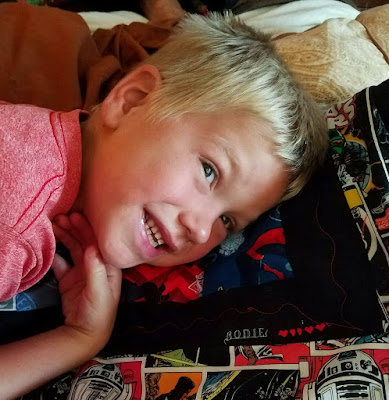 I'm a perfectionist. The fabric on the back was stretchy and something I hadn't worked with before. It puckered, it pulled and the borders ended up looking pretty darn awful. I had to resist the urge to pull the stitches all out and start again.

But then, Bodie woke up this morning and said "Mama!!! You finished!!! This day could not get any better now that I have my quilt!" I LOVE IT!!! It is the best quilt ever!" 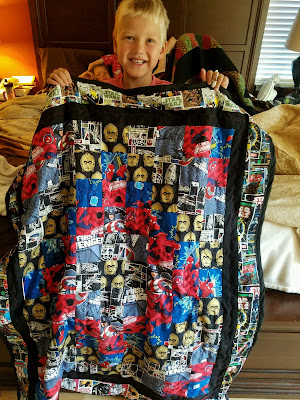 I'll take that.
All of the sudden my criticisms of the quilt fell by the wayside.
All that mattered was that HE loved it.
And he DOES.
The best quilt ever for the bravest boy ever. 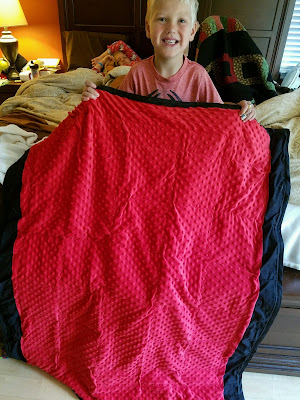 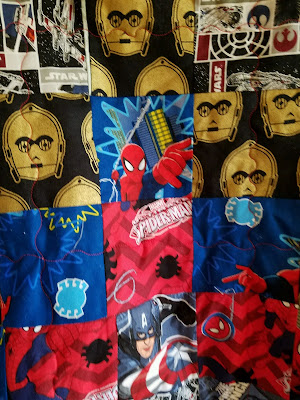 This was a promise I didn't mind making good on.

When I laid it over him last night as he slept, I couldn't help but pray over him, and ask God to grant him some extra superhero powers for this upcoming surgery. 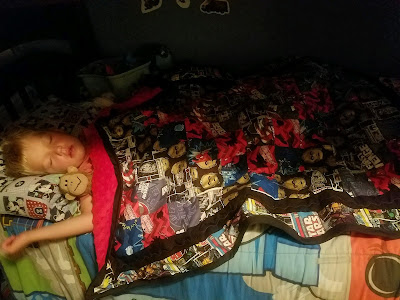