Recovery: The good, the bad, the unexpected

Bodie is now 2 weeks post-op, and, by most measures of success, doing pretty well.

This recovery has been much harder than previous surgeries, and we're not sure why - perhaps it's his age (being older now) or the fact that this was a more painful surgery, or some combination of the two. But by Monday, Dusk and I had reached the conclusion that something was different about this recovery. We knew Bodie was holding onto fluid (we could see it in his poor puffy eyes) and he was spending a lot of time lying around and saying he didn't feel well.

We had a follow up appointment with cardiology on Monday and found our answer. His heart function is pretty sluggish, compared with his baseline function. It's a bit of a chicken and the egg scenario - "Is his heart function sluggish because they pushed so many fluids after the seizure and it's just hard for his heart to get through that extra fluid? Or is there so much fluid onboard because his heart is so sluggish from the after effects of the anesthesia that it can't get the fluid off like it normally could?" Either way, the end result is the same - a kid feeling crummy and like a balloon about to pop. So we doubled his diuretics - and, 4 days later, he has peed off 4 pounds of fluid (seriously, almost 10% of his body weight? I'd be feeling pretty cruddy, too if I was carrying an extra 10% of water weight!!!) - and is like a new kid.

He even went to karate on Wednesday and earned his next belt stripe! 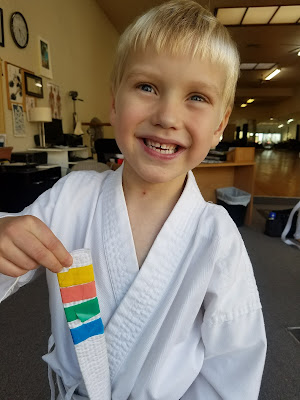 (I know, 12 days post op is a little soon to return to karate, but in my defense, the CT surgery team had said he could return to karate "when he feels ready" and, well, he felt ready!!!).

The plan now is to slowly wean the diuretics and make sure his body can handle it. His heart function took a similar hit following his Glenn surgery at 7 months old, so this is not our first time at this particular rodeo. It recovered then fairly quickly, and there is no reason to think it will not recover again this time. All the same, we really appreciate prayers specifically for his heart function to bounce back. In the meantime, he'll be monitored closely by cardiology to make sure we see that function come back to his baseline.

He had his CT surgery post op appointment today and that went well.  Unfortunately, during his appointment, he was in EAT (Ectopic Atrial Tachycardia, the fast heartrate - i.e. the whole reason we did this surgery). We knew going into this surgery that there was NO guarantee it would work, but that the odds were very good that it would help him by reducing the amount of EAT he's in, and the odds were pretty good that it would stop it entirely. Unfortunately, surgery has not stopped the EAT entirely. And, from my vantage point, it looks like we're actually seeing a lot of it.

We're trying not to jump to conclusions ("surgery failed! We never should have done this!") - clearly, I'm VERY good at doing just that. His electrophysiologist wants us to get him fully recovered (approximately 30 days post op) to do a holter monitor and see where we're at. We'd REALLY appreciate prayer that the EAT we're currently seeing is just post-op nerve twitchiness and that, as he fully recovers, it will go away.

Finally (if you've made it this far!), Bodie had one unexpected complication from surgery that he wants to share with you all. If you can believe it, he is SUPER excited about this. The nerve to his left eye was affected by the surgery and his left eyelid droops a bit now and his pupils are different sizes (the right is bigger than the left). 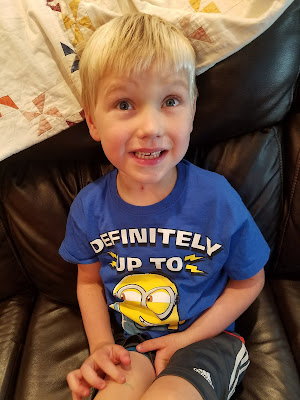 So, basically, my previously big blue eyed baby now has the trademark "Gerrish squint."
Sorry, dude.
At least you look more like me now?

(The technical term for this rare (so of course Bodie got it) complication from a sympathectomy is "Horner's Syndrome."). It does NOT affect him in any way other than cosmetically. It was long thought to be completely irreversible, but a recent study showed an almost 50% chance of it spontaneously going away within 6 months post-op.

Bodie's is very mild. Sometimes, you can hardly tell. When he is tired, or fluid overloaded (like the last 2 weeks), it is more obvious. (So if you thought there was something "off" about his left eye in pictures since his surgery, you were right - and very observant!)) And when he goes out in the sunlight, the right pupil constricts almost down to the size of the left, so you can't tell at all. We had held off saying anything since, well, does this poor kid really need us pointing out anything else to make him different?

Dusk and I were pretty crushed initially. But we told Bodie this morning and he was SO excited. He says it makes him like a Superhero now. He is so proud of his special eyes! So we're running with that. I think we could ALL use a little of that resilience in our lives! 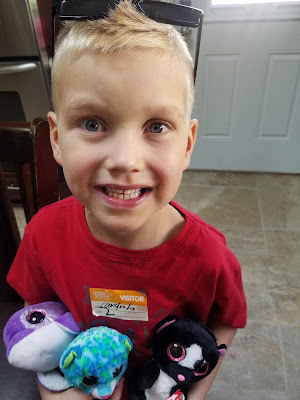 So I'll leave it up to you whether to pray for it to spontaneously resolve. If you do, just don't tell Bodie - he really wants it to stay that way!