I've been getting a lot of questions lately about how Bodie's doing, and the answer is, we don't know.

He has so much energy.
His color is so much better.
His sats are back to baseline (typically mid 90's, with dips down to the low 90's here and there).

He is still eating us out of house and home. His first words every.single.morning are "I'M STARVING!!!" and he walks in the door after school asking what's for dinner and when we're eating it. It's sort of like having a teenage boy in the house. It's amazing and something we have NEVER experienced with Bodie. He told us he was hungry more in the first 2 weeks after this last hospital discharge than in the first 6 1/2 years of his life combined. We don't really have an explanation, other than to assume that the beta blockers he had been on since infancy had been stunting his appetite.

He just looks better all the way around.
We could almost convince ourselves that his heart function must have rebounded.
Almost.

But he had a rough week last week, where he wasn't feeling well again, complaining of tummy aches and being tired. His heart rate was running higher and his sats were running lower.  He has bounced back now and seems better, so we're just assuming he had the tummy bug that had been going around school. But it was a not so subtle reminder that things aren't back to baseline for Bodie, and that his reduced heart function makes it that much harder for him to fight off bugs.

And his heartrate continues to be really erratic. It doesn't seem to be bothering him nearly as much as it used to, but it's not good for him long-term. We don't have any answers on that yet.

And, in truth, we have NO idea how things are looking on the inside. We HOPE that because they're looking better on the outside, that correlates to an improvement on the inside. But, if we know nothing about our son, it's that he's

We have a battery of tests and appointments on Thursday up at CHLA, and we'll be seeing both the Electrophysiologist and the Heart Failure team. And we will know more then.
We covet your prayers for that appointment.

Please pray boldly that his heart function has completely rebounded.
Pray that damage they thought a month ago to be irreversible has actually reversed itself.
If not that, then at least some improvement.
PLEASE pray for improvement.
WE NEED TO SEE IMPROVEMENT.
Pray for his BNP (measure of heart failure via blood test) to have continued trending downward.
Pray for his heart function (measured by echo) to have improved.
Please pray for our boy.

So much is riding on this appointment.
And we really have no idea what we're going to find.
So you can probably guess how high nerves are running in our house right now.
Please pray for peace for us all going into this appointment.

And just pray for our little rockstar. 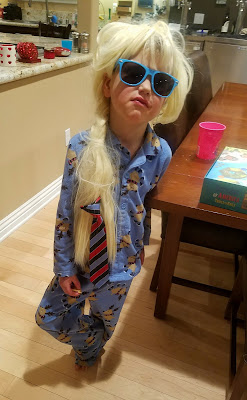