The good news is that Bodie's heart function hasn't gotten any worse.
The not so good news is that it also hasn't improved at all.
The heart failure doctor said he was really trying to find improvement on the echo, but he really didn't see any.
(We don't know what his bloodwork looks like yet, since we did that at the end of the day.)

Man, this kid is SO good at compensating.

I'll be honest.
I'm bummed.
I had really hoped we'd see an improvement on his echo.
He just looks SO GOOD from the outside.
But his heart failure doctor (and heart failure docs are negative by nature) actually said that a month just isn't much time to see change. We need to see how he does over the next 3-6 months to really determine whether the heart will rebound. I needed to hear that today.

The fact that he DOES look so good from the outside is a very, very good sign. We are all encouraged by that. Because he is stable on the inside and looks so good on the outside, we have tabled the transplant discussion for now.

However, if Bodie's heart function doesn't start to pick up fairly quickly here, that conversation will be front and center. For now, it's just the elephant sitting in the corner, just breathing heavy and giving us dirty looks, while we all smile and pretend it's not there. And see the heart failure team again a month from now.

So we wait and pray.


We're getting pretty good at that.

We also made one medication change.
Bodie is having persistently high heart rates, sitting usually in the 130s to 140s. That's not dangerous to him now, but isn't good for the heart in the long term. Sitting at those rates day in and day out wears on the heart and can cause further heart dysfunction. His electrophysiologist just isn't comfortable leaving him like that. So, we're starting him on Carvedilol, a medication commonly used to treat heart failure, which has the added benefit of a small beta blocker component. We know a number of heart friends on it who've seen significant improvement in heart function while on it, so we are hopeful.

To say that we're nervous going back on beta blockers is the understatement of the century. BUT he is starting out at a very low dose (unlike the very high doses of Nadalol he was on when he went into sudden heart failure). So we're hopeful that a small dose will be just enough to bring his heartrates down without triggering further heart failure. And the bottom line is that we trust his team and know that if they are recommending it, it is because they believe it is in Bodie's best interest.

So, lots of prayers tonight:
1. Pray that Bodie tolerates the new medication well, and that it HELPS his heart function and brings his heartrate down without causing further heart failure or negative side effects.

3. Pray for peace for all of us. Today was a reminder that this heart failure is not just a quick little detour off of our journey, but a place we're meant to stay for some time. And it's an exhausting place to stay. We're all worn out by the last few months, and the promise of it continuing doesn't exactly help replenish our reserves. Please pray for us to find ways to find respite amongst a really exhausting journey.

Bodie looks good from the outside.
He really really does.
I was marveling at him during his echo today, thinking of what an amazing kid he is and how far God has brought him with this crappy little half a heart.
We are so, so blessed.

When we got home tonight, he went to change his clothes and got quite a start when he pulled his shirt off and remembered that he didn't let me take any of his stickers off at the hospital. 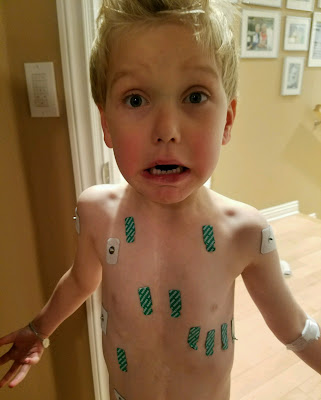 He picked them all off himself (he also takes out his own IV's these days) and found a much better place for them.
Also known as our bedroom door. 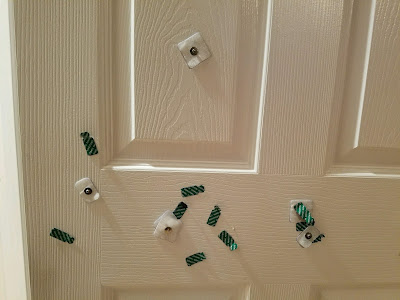 As you can see, he's still got his sense of humor intact.
Thank GOD for that!