We have one sick little boy on our hands right now. 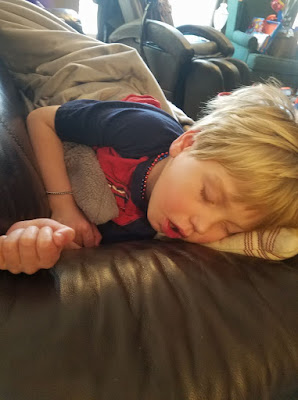 Some nasty bug has hit his 1st and 2nd grade class and taken down all but 2 of the kids (at latest count, at least). And it took them all down within 4 days. Crazy.

He has been out of school since Tuesday, with a fever and coughing, and some congestion.

By all accounts, although it's hanging on, it's not the worst virus in the world. Manageable symptoms - for a healthy kid. He's tolerating it well, thankfully.

Tuesday night, his heartrate was running in the 160s and his sats were in the high 80s (both NOT good for any kid, let alone ours), but we managed to eek it out at home and haven't seen anything that drastic since then. His heartrate is a little high, but his oxygen saturations seem to be holding steady, for the most part. He doesn't have labored breathing, he's not retracting. He's just uncomfortable and tired, and we're managing it with Motrin and Tylenol. He still has an appetite, so continues to eat well. He seems to be managing it like every other kid in his class. Up and down, but really just making him a little more tired and cranky. He's been watching movies, doing puzzles and building Legos. Like any typical sick 7-year old.

Except that he's not.
He has half a heart.
And his function is severely depressed.

I cannot stress enough how lucky we are to be able to manage this at home.
Many of our friends don't know this, but most kids with the degree of heart dysfunction he has end up inpatient for every virus, particularly if they're respiratory in nature.
So this virus has me on edge.

Bodie has always had a robust immune system.
When he was 4 months old in the hospital recovering from both c-diff and MRSA in his bloodstream at the same time, the cardiac team consulted immunology. The immunologist walked in and said "I'm happy to test this kid. But bottom line, a Norwood single ventricle infant who is still alive after battling both MRSA and c-diff at the same time clearly does not have any issues with his immune system."

And that doctor was right.
Although Bodie has caught a lot of bugs over the years (particularly when his oxygen saturations were lower, making it harder for his body to fight stuff off in general), he never had to be hospitalized for viruses or bacterial infections. He just kinda powers through them. We have been exceedingly blessed.

But heart failure changes the picture.
When Bodie was diagnosed with heart failure in early December, the doctor told us "this cold and flu season will tell us how soon he needs to be listed for transplant. If he is inpatient every time he gets sick, then his body will clearly be telling us that it's time." I am pretty sure, based on the condition of his heart, she expected him to be inpatient most of cold and flu season.

And yet, he is holding strong at home.
We are so blessed.
If it takes him a couple more days than his peers to get past this, then I will consider it an incredible blessing.

But the more prolonged the virus is, the greater the likelihood that his heart will grow tired and we'll end up needing to take him to the hospital.

So please pray for our little dude.
Pray that we're nearing the end of the virus, and that we can get back to life as normal (well, life as normal as it is with a half a heart that's not functioning too well.)

We were supposed to see the heart failure team this week, but rescheduled due to Bodie being sick. We aren't interested in bringing his germs into the cardiology clinic, particularly to the heart failure team, who deal with kids in heart failure (who can't handle viruses due to weakened heart function) and transplant kiddos (who can't handle viruses due to immune systems wiped out to prevent rejection of their new hearts). They have tentatively rescheduled us for next week. Please pray Bodie is well enough to go and that we get good news.