Taking the good where we can find it

Bodie had an appointment with the heart failure team today.
(It had been rescheduled twice due to the plague that hit our house, but everyone is finally well now (thank God!), so we were finally able to get in today).

The good news is that his BNP, or measure of heart inflammation, has continued to drop, from 285 in mid-January down to 230 today! This is very good news and means that his current cocktail of meds is effectively taking enough workload off of his heart so that it isn't as stressed from the dysfunction.

Unfortunately, his heart function just has not improved. At all. We were very hopeful that it would. But, at the end of the day, it just hasn't.

So what does this mean for Bodie?
Despite his severe dysfunction on echo, he looks pretty good all things considered. I mean, he doesn't look good compared to kid with a perfectly healthy heart and good heart function - he's not running any marathons or anything. But for a kid with severe heart failure, he looks pretty darn good. His energy is good, he is eating well, he grew a bit and he's enjoying life. He's in school, and, on his good days, he's really not that symptomatic. There are a lot of days where you wouldn't even know.

But, on his bad days, it's very hard to keep sight of how good he looks on his good days. For Bodie, his heart failure shows up almost entirely in GI symptoms. On his bad days, he wakes up nauseas, and sometimes throws up mid-morning (usually at school, unfortunately - yay for Bodie, who now gets to be that kid who barfs at school - as if he hasn't been dealt an unfair hand enough already). He usually perks up later in the day and is fine by evening. But the bad days are hard to predict and often leave him sad. And some days we can make it 2 weeks before he has a bad day. And other weeks, he'll have 2 bad days just a few days apart.  It's frustrating for Bodie and heartbreaking for us.

He cannot sustain this up and down indefinitely. Honestly, it's working for now, but it's no way for a 7 year old to live life. We tell Bodie all the time that this season won't last forever - either his heart will recover - or it won't, and he'll get a new one that will work much better for him. That said, he's currently stable enough that the heart failure doctor is comfortable waiting 3 months to see us again (a 3 month pass is pretty fantastic for a kid in severe heart failure!). If his heart function still has not started to rebound by then, then it's likely we'll having the transplant discussion.

This does not mean he will be listed for a heart in 3 months. What it means is that we will have a discussion about evaluating him for transplant in 3 months. If, based on where he looks in 3 months, we decide to proceed with that, THEN we will start the transplant evaluation process at that time. The process itself takes some time. Even then, the decision may be to hold off on listing him if he otherwise looks ok and is compensating well. Or, the evaluation may reveal that he really needs to be listed ASAP. We don't know at this juncture. So, transplant, while still on the table, is still a bit off for Bodie - as of right now, at least.

Today was a good day. Bodie is having a GREAT day symptom wise and his appointment was good. His function has not gotten any worse and his bloodwork continues to improve.  He got back to school in time to enjoy his school's annual Game Day with his classmates and is having a playdate this afternoon with one of his best friends. In a life of constant fluctuations with his health, we will take days like today any day. And pray for many, many more of them.

I will leave you with this.
In case you're wondering what brave looks like, here it is. After a blood draw, ekg, echo and consult with the heart failure doctor, he brushed it off and headed back to school and into Game Day with a huge smile and dressed in orange just like every other kid in his class. 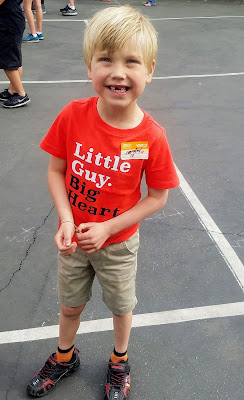 Today was a good day indeed.