Stable is as stable does.

The kiddos finished school yesterday, and kicked off the summer in style, with lunch with friends, swimming, s'mores and a late night movie in the first 24 hours alone...
and an echo, ekg and marathon appointment with the heart failure team. 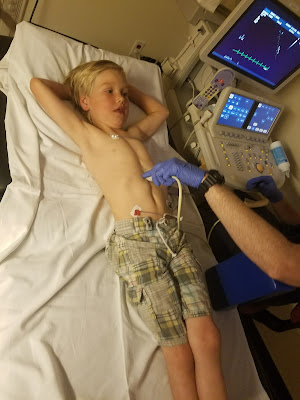 (wait - you mean every kid doesn't start the summer that way???)
And can you believe this kid? Cool as a cucumber, just chilling watching a movie during his echo. SO mature today. Didn't even cry during his blood draw.

The good news is that Bodie is stable, with maybe even a tiny improvement in his function. Although the improvement isn't super noticeable, his BNP (measure of heart failure) is continuing to drop, almost to normal levels (down to 94 - from 230 at his last appointment in March, and over 900 at its peak)! And the valve regurgitation we were seeing has slowly been improving on each echo, and is no longer even seen. All very good news and good indicators that his heart, despite severe dysfunction, is relatively happy with the cocktail of medications he's on.

In other words, he is compensating well, both on the inside and the outside. His nausea has been kept fairly well at bay, thanks to changing the timing of his meds. And, other than his exercise intolerance, he's feeling pretty good these days, thankfully! It was nice to have the echo and bloodwork confirm what we've been seeing.

However, we all know he cannot compensate forever. So we have been talking to UCLA, CHLA and Stanford about when to evaluate and ultimately list him for a heart transplant. He is compensating well enough that I don't believe anyone wants to list him yet; however, we want to have these discussions while he is doing relatively well and we have the luxury of time to research and make decisions regarding care. Nothing definitive yet, but we will likely be having more serious conversations about that this summer, including when to start actively treating the rather large number of antibodies he has (his specific antibodies as they currently stand are likely to make him reject a heart from a large portion of the population, so we have to be very intentional about how and when and where we choose to try to reduce them prior to listing him).

These are conversations we knew were coming.
Even so, conversations that make my brain - and my heart - hurt.
Conversations no one wants to have about a loved one, especially your 7 year old.
We covet your prayers as we have these discussions, and go through the process to determine which center will best meet Bodie's (and our entire family's) needs.

In the meantime, we are breathing a big sigh of relief that he is stable - and getting ready for some big summer plans. We were excited to get clearance today for our Tahoe trip, a trip to Florida for my parent's 50th wedding anniversary, and heart camp!

Maybe not the most typical way to start the summer.
But we'll take it.
And we plan to spend this summer enjoying the heck out of it.
If we have learned anything on this journey, it's that nothing is promised.
That rings especially true when you're gingerly stepping into a new path on the journey.
So we plan to take these moments while we have them.
Summer, here we come!