Bodie had appointments yesterday with his team at CHLA. We saw both his electrophsysiologist and his heart failure cardiologist.

From a heart failure standpoint, he is holding steady. His BNP (measure of heart inflammation) is continuing to trend downward, which is FANTASTIC. It is now down to 40, which is normal! His valve regurgitation has pretty much completely gone away. Both of these are good indicators that his heart is not as stressed by the dysfunction as it was earlier this year.

He's also finally growing, which is wonderful. He has struggled with growth courtesy of his heart failure. But he has grown an inch and gained 4 pounds since March, so we are thrilled!

But his heart function as a whole is...unchanged.
Unfreakingchanged.
Still barely moving at the bottom.
Severe dysfunction.
Barring a miracle, I think the chapter on his heart healing itself has closed.

So the question then becomes, given how quickly he decompensated last Fall and the fact that we still aren't 100% certain on the etiology of that decompensation, how likely is it to happen again and how does that play into how soon do we list him for heart transplant?
It is a balancing act, and we're not sure where we'll land just yet.

So we move full steam ahead to Stanford late next week for a transplant evaluation and then figure out where we go from there. We covet your prayers for that appointment. For wisdom, for clear decisions and for peace for all of us. We're starting to get to the tougher discussions and that's hard on all of us, not least of all, these two. 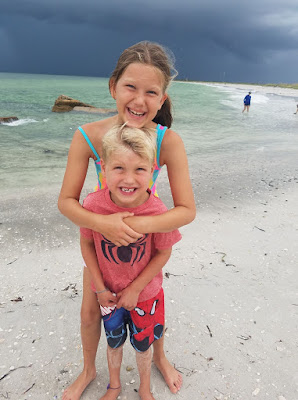 I still struggle to wrap my mind around the fact that we're having conversations about our 7-YEAR OLD having a heart transplant. The enormity of it overwhelms when I really let it sink in. I mean, is this seriously my life?

But while it's hard for Dusk and I to wrap our minds around all of this uncertainty, we have a lifetime of experience to guide us. Our kids have 10 years and 7 years.
Nothing about this is easy.

Please pray as we move full steam ahead.