Apparently, Bodie heard all about the brand new hospital CHLA just opened and was NOT content to wait all the way until his next scheduled appointment in September to check it out...because, here we find ourselves, in the brand spanking new CardioVascular Acute Care Unit. Ick.

The downside, of course, is that it is the stinking hospital. No fun, right? But the upside is that the new CVACU is incredible. Really, the whole hospital is. The ER is spectactular - quiet and all rooms are private (I mean, seriously, have you ever heard of that in an ER? Incredible). And where we're at now, on what was formerly known as "the floor" (or informally known as the 10th circle of Hell, depending on who you were talking to and how long their child had been stuck there), it is a whole new ballgame. It is beautiful, almost all of the rooms are private with window sleeper beds and beautiful views of LA, they each have their own bathroom with a shower that parents can use as well, and it is SO quiet. A lot of our favorite nurses came over from the floor to this new unit, so it's been so exciting to see such familiar faces. Bodie has been walking the halls like he owns the place, flirting like crazy. It's SO neat to see the nurses who loved him so much as a frail little newborn take to him now as a silly little toddler.

The best part of the new hospital, in my opinion, is the more family centered environment. The hospital has changed its policy on visitation - previously, patients were allowed only 2 visitors at a time and mom and dad were counted in that total. Yes, you read that right - so if you had another visitor, either mom or dad would have to go sit downstairs and wait. It totally sucked. But now, there is so much more freedom to bring other family members and friends in. I love that! Tonight, Dusk and Sierra came up and brought dinner. It was so fun to eat dinner together in our room, watch the kids play together for a bit, and then give them baths in the bathtub in our room. Really, it was such a blessing and so wonderful for our family. As you can see, the kids thought it was a lot of fun... 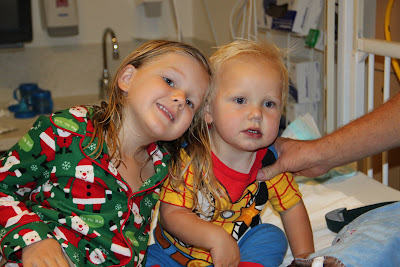 Of course, the big question, WHY are we here? Well, as I mentioned Bodie has been sick for almost a week now, first with a rash, then with a low-grade fever. Sunday night, he added enough inconsolability to the list that we took him into the CHLA ER. Since his eyes were bloodshot and his ears were red, they told us it was either a virus or a bacterial infection and sent us on our way with antibiotics. Then, Monday night, his heart rate jumped quite a bit (we have an at-home pulse ox and while he usually sits at 80bpm while he sleeps, he was in the 140's). Our cardiologist said it was probably his body responding to the bug and just to watch it. By this morning, he was sitting between 180 and 200. Yeah, crazy. So, after consulting with both Bodie's cardiologist and his electrophysiologist (he specializes in heart rhythym issues), it was decided that Bodie should be admitted. His EP wasn't especially concerned about the heartrate itself, but he was concerned about his myriad of odd symptoms. He wanted Bodie admitted just to get another set of eyes on him and make sure it was just the bug causing EAT (atrial tachycardia - basically, a really fast heart rate) and not something more serious (like, say, Kawasaki's Disease).

A good lookover later, I think everyone's pretty convinced it's just a bug that he's getting over at this point. But they're putting him on Propranalol (a beta blocker, to bring his heart rate down) and want to watch him. God willing, he will respond well and we'll be out of here SOON (hoping for tomorrow, but with hospital life, you just never know). So we definitely covet your prayers for a VERY short hospital stay this time around. And, in the meantime, we'll just enjoy this hotel, er, I mean, hospital. ;-)