Today, I took both kids with me for Sierra's surgical consult. She has a bump on her hand that her pediatrician was fairly sure was a cyst, but wasn't quite where you'd expect a ganglion cyst to be, so wanted a surgeon to check it out. He, too, determined that it is likely a ganglion cyst and just wants to watch it since it's not causing her any pain. But because we don't know how long it's been there (Mom of the Year Award for me for not even noticing the bump - my mother-in-law is the one who discovered it - thank you Grandma Jan, but I have some serious mama guilt over missing it...), he's sending us for an ultrasound to see how big it is, how deep it goes, etc. Hopefully, we can just watch it and it won't require any surgical intervention. The surgeon was really nice and didn't seem too concerned, so that made me feel pretty good.

The surgeon was a general surgeon, so sees all sorts of pediatric issues. After he checked Sierra out, he left to go get the ultrasound paperwork. He came back with Sierra's chart in his hand, looked at Bodie and said "wait, HE has Hypoplastic Left Heart Syndrome? He looks AMAZING!" (I guess that tidbit was in Sierra's chart) The surprise in his voice was unmistakable. Apparently, he does g-tube and nissan surgeries at UCLA, so sees a lot of HLHSers and knows a lot of them struggle with feeding issues and weight gain. I guess he's used to seeing scrawny little Norwoods (which Bodie once was for sure) so he was pretty impressed with Bodie. He was surprised to see Bodie digging through my purse for the pretzels. It was pretty funny. ;-)

After her surgical consult, we hopped on over to the cardiology office who did Sierra's consult (anytime one person in the family has a left ventricle defect, they generally recommend that all immediate family members get cardiac screenings, just because they can run in the family).  Anyway, the cardiologist who did Sierra's consult 2 years ago was one we didn't know that well, so I had asked Bodie's cardiologist to take a look at the report and make sure they didn't miss anything. Since we were in the building anyway, I ran over and got the report.

When I read the report (Sierra shows no cardiac abnormalities, by the way), two things struck out at me. First, the doctor described our family history as "fascinating" - and that was before Bodie was born! (Suffice it to say, Bodie has definitely ratcheted up our family at least a couple of notches in the fascinating category!) Clearly he was referring to Dusk's family history. That term gave me quite a laugh.

The other thing that struck out wasn't quite as funny. He had the following sentence in his report:

"The maternal history is devastating."

I guess I can see how he would use that term. For those of you who don't know, our journey to building a family wasn't exactly easy. We've never had much problem getting pregnant - it's the staying pregnant that has always proved our challenge. We had 2 early miscarriages before Sierra was born. Between Sierra and Bodie, we had a 3rd early miscarriage as well as a second trimester loss (that sweet baby had Down Syndrome and a cystic hygroma (really large nuchal fold) and passed away in utero). And we're pretty sure we've had one additional early miscarriage since Bodie (I'll spare you the details, but we're fairly certain). So yes, I can see how someone would describe it as devastating.

But I wouldn't describe it that way. Yes, each loss has been painful, some more excruciating than others, but all painful for sure. And yes, devastating at the time. And I take such joy in knowing that the family we have in Heaven will be twice the size of our family here on earth (I have always so wanted a big family). But I don't know. I guess I look at it as though it was the building process to giving us the family God intended us to enjoy for now.

And truly, if this is what "devastating" looks like... 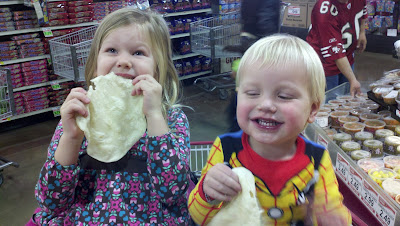