Yikes - the past few weeks have been chock full of changes. And...you all know how good I am with change (insert eye roll here). But change we must, so we keep on keeping on. Most of the changes have been good, but even good changes often come with a little bittersweet attached to them. But I'm choosing to focus on the good, which in this case, is pretty dang good stuff...

Big Boy Bed Madness
This past week, Bodie officially lost the crib and gained a big boy bed - in the form of bunk beds for the kids! I know, we're crazy, right? Who on earth would get a little climber like Bodie bunk beds?  Parents who are desperate to gain a little more floor space in the kids' room, that's who. Let me tell you, the kids are LOVING them. And no one has fallen off the ladder...yet. We're still hanging onto the crib a little longer - partly because it's nice to have it as a threat/time out location for Bodie, and partly because I've never actually sold anything on Craigslist before and quite frankly, I'm a little scared - and probably partly because, well, selling the crib means we're really, totally, officially, out of that stage, the wholesome, chubby, sweet baby innocence stage. Or, the screaming, crying, won't sleep through the night, projectile vomiting infant stage, however you wanna look at it. ;-) But, the kids definitely have no mixed feelings about it, as you can clearly see... 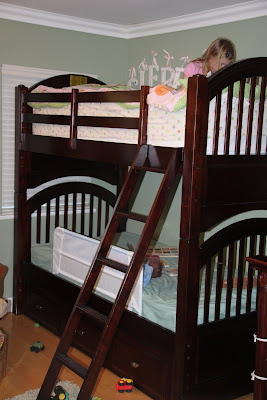 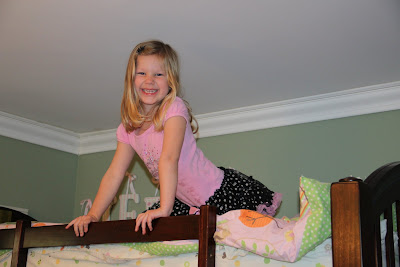 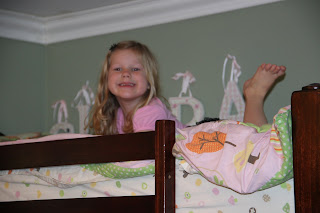 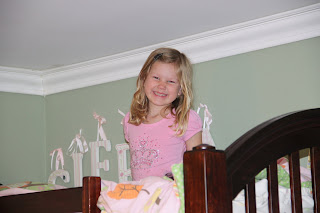 Underwear Madness
So, this might fall into the category of waaaaaaay TMI, but hey, it's my blog and I have edit rights, so it's getting included! Ha! Bodie is officially completely poop trained. Can I get an amen for that?!? As for pee, well, we're working on it. When he's completely naked from the waist down, he's on it - no accidents whatsoever. But as soon as he has anything on (pull-ups, underwear, commando pants, you name it), it's a freakin free for all of peeing with wild abandon. And, sadly, his preschool won't let him come naked. So, we're running naked at home (and by "we," I mean Bodie - and only Bodie), and pull-ups are at a premium when we leave the house these days. And that means I said "goodbye" to our cloth diaper stash. What sadness for me. I cloth diapered both kids and, as any mom will tell you who cloth diapers, they are ADORABLE. (So not like what our moms used with us as kids - they're totally fashionable now!) But alas, trying to put a diaper on a child standing up got very old very fast, so goodbye to the cloth diapers it was. Thankfully, we found a new happy home for the cloth diapers, with a family of another special CHD warrior expecting their new babe soon. But this mama was still sad to see them go - so many memories of "firsts" wrapped up in those cute little diapers - first crawls, first stands, first steps, etc. Definitely dealing with some bittersweet emotions on that front! 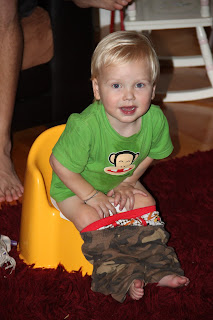 Preschool Madness
For reasons which we, for the most part, understand, but don't agree with, Sierra's preschool has opted not to accept Bodie into their program. Huge heartbreak for us, as we had always planned on sending Bodie there. But we know God must have better plans for our special little guy (would definitely appreciate some serious prayer that God would lead us to the right school for him as well as settled hearts for us in the process!!!).

In the meantime, we had his first "Parent-Teacher Conference" at his TWISPP program this past week and it seriously could not have gone better. His teacher said she was excited to see Bodie was on the list for a conference, but that she actually had to think of things he could improve upon because he really is such a good kid. She talked about his strengths - how verbal he is, how quickly he picks things up (he seems smart to us, but it's always nice to hear it from someone else, you know, not related to him and therefore totally biased!), and how well he shares (not that I can blame him - it's probably easy to share with other 2 year-olds when you're used to your older sister literally ripping toys out of your hands on a regular basis!) as well as his weaknesses - spatial awareness (i.e. it would be great if he could stop sitting on and running into other kids - but then since I do the same thing, I don't know how much hope there is for him!) and self-soothing (can I get another Amen for that one, please?!?). She was super relieved to hear that we wouldn't be pulling him out of the program just yet - a few weeks ago we had mentioned we might be moving him to Sierra's preschool in the near future, before we knew it wasn't a possibility. She said the teachers had been so sad to hear that, and that they totally love Bodie. It was so reassuring to hear how much they love and appreciate having him there. Music to a mama's ears, that's for sure.

Oh, and he has a little girlfriend at TWISPP. If you ask him who he played with, he says "Zoeeeeeeeeeey. Key-ute." or "dor-able" And then gets all bashful. He's right. She is super cute - totally adorable. They pal around together. He could definitely do worse. ;-)

Skating Madness
Last week, for our mommy-Sierra date, I took Sierra ice-skating for the first time. Ever since my parents got her "Ice Princess," she has been obsessed with ice skating. Well, let's just say that while I'm not sure she's a natural, she sure had fun - and that's the most important part. 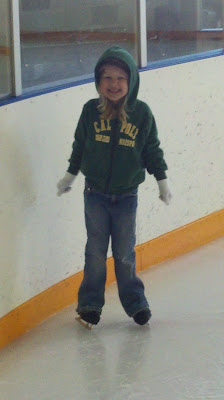 The best part? When we walked in, her eyes got huge and she gasped really loudly, saying "Golf AND skating?!?!?!?!?" in the most incredulous voice. I looked up to realize she was looking at a poster of a hockey player. Hahahahaha. I guess it would look like golf and skating all at once. So cute! And the LA Kings train at the rink where we were skating, so we got to watch them train for awhile - between that and the "ballet skating" (figure skating), Sierra was in 7th Heaven!

Here she was, watching the action... 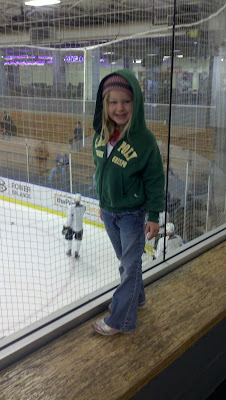 Cardiology Madness
In Bodie heart news, he had an appointment with his Electrophysiologist last week and we discovered that his ventricular pacemaker lead has either broken off or is just somehow no longer functioning. NOT good. We are lucky that he doesn't rely on that wire, so they were able to just turn it off - but, had it been a lead he depends on (like his atrial wire), we would have been looking at imminent surgery to get it fixed. Well, if  if 1 wire had to stop functioning, at least it's the one he doesn't need, right? (How's that for glass is 1/2 full?)

In other news, he's continuing to stump his doctors in terms of them really understanding the full picture of why his heart responds the way it does. Please pray for some answers and clarity for the doctors, so that they can make sure they are treating him as proactively as possible. It is SO disconcerting as a parent to sit across from an absolutely brilliant doctor who, when asked whether Bodie will be able to come off his beta blocker, responds by shrugging his shoulders and saying "I hope so, but honestly I DON'T KNOW. I still haven't been able to figure out your son - he's a mystery to me." I so appreciate his honesty, but I am unsettled nonetheless. So prayers in this arena would be great appreciated! (Oh, and for the record, the answer is definitively "No, I will not come off this Beta Blocker" when we tried weaning it this week - but he seems to be faring better weaning his pulmonary hypertension med - heck, we'll take what we can get!)

Thanks as always awesome prayer warriors!