The space that can only be filled by Isaac

Today is Pregnancy and Infant Loss Awareness Day. How very fitting for me to spend it with one of my most favorite angel moms, Cindy. 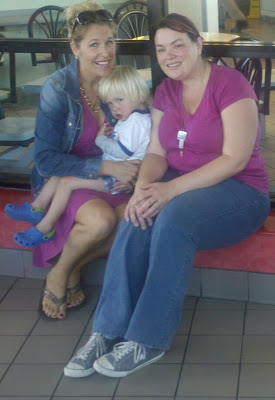 I love Cindy. I love her family. God paved such a path to intertwine our boys and our families. We will forever be linked. We will never forget Isaac, and how hard Cindy fought for him. I could, and may be, walking her walk at any moment. I can only hope that if and when I do, I can walk it with as much grace as she does. She is an incredible woman of God.

Before today, the last time I saw Cindy was 2 years ago. In honor of Cindy and Isaac, and all the moms with empty arms today, I want to repost my blog entry from that day.

We love you Isaac.

The space between us 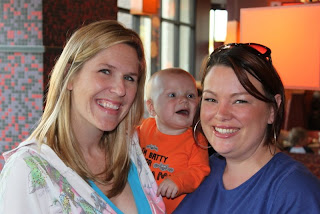 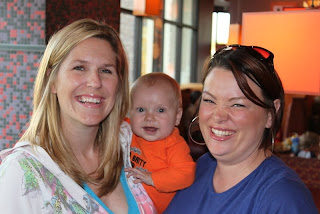 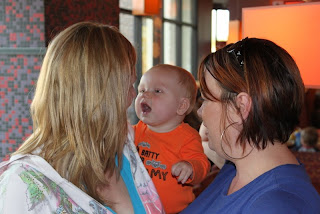 As I mentioned in yesterday's post, Bodie, Dusk and I had a wonderful opportunity to meet up with one of my heart sisters, Cindy, this past weekend. What I didn't mention was how bittersweet that meeting was. So sweet, so very, very sweet, to see Cindy again, to feel that instant bond with her, the love that flows freely between our hearts. But so, bitter, so very, very, painfully bitter to feel the space between us. The space that should have been filled with 2 boys fighting to get off their mama's laps, 2 boys trying to open Puff's containers with their mouths and giving everyone around silly, goofy grins. The space that instead was only shared by my sweet boy and the memory of the one who left before him. The space that will never be filled.


Oh, the aching sadness to think of how things should have been. Bodie and Isaac are such brothers, not just brothers in Christ, but heart brothers as well. They were from the start, well, actually, from before the start. A few weeks before Bodie was born, my mom heard about a fundraiser being held in Santa Maria for a baby boy named Isaac, who would be having multiple heart surgeries down at Children's Hospital Los Angeles. Like my mom does, bless her heart, she held on to the story and wouldn't stop talking about how neat it would be if I met Isaac's mom and dad. To be honest, I had a lot of other things on my mind and couldn't really have cared less who I did or didn't meet once my baby was born. God had other ideas. He knew I would need Cindy.

After Bodie's Norwood surgery, he was moved into a 4 bed room and the baby diagonally across from him was named Isaac. I pointed out the sign to my mom, laughingly saying that must have been her Isaac. Of course my mom immediately ran over to the young mother sitting beside the baby's bed to see if it was the same Isaac she had heard about on the radio. Indeed it was. THANK GOD my mom is a crazy friendly person, because I honestly wouldn't have done that. Cindy came over to talk to me and a friendship was born. Day in and day out in that room, we would talk and swap stories.

Then, Bodie was moved to the 3 bed room next store, and sure enough, Isaac came over too. What fun! The boys used to give nurse Alex a run for his money - poor Alex was relatively new at the whole icu nursing thing and would always get the boys paired and I swear, Bodie would wait until Isaac was crying for a diaper change and would immediately pee or poop, too. Alex would just be exhausted from taking care of both boys all day! 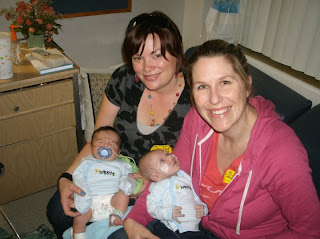 Then, Bodie was moved to the step-down unit and low and behold, Isaac was moved just a few hours later - and they both came to the same room!!! Isaac and Bodie were across from each other for the remainder of Bodie's stays. It was so wonderful to have a partner in Cindy. Sometimes (ok, a lot of the time - it's the step down unit floor after all) the nurses would get so busy with the patients that they wouldn't have the time to call a parent if something happened and the parent was away from the bedside. So it was such a blessing for Cindy and I to have one another - I could text her if she happened to have headed over to the Ronald McDonald house to catch some sleep and let her know Isaac was having a rough night and she might want to come back. Or she could text me to let me know that all of the nurses were huddled around Bodie's bed because he was desatting and misbehaving again. It just made the being in the hospital thing so much easier. 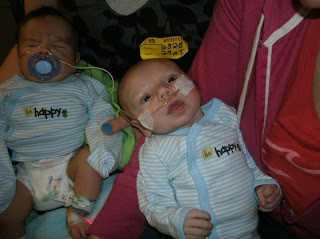 A week or two after Bodie was discharged, Isaac got to go home, too! He had a slightly less tumultuous next few months, enjoying being at home with his amazing mother Cindy, dad Jeff and big brothers Michael, Evan and Caleb. Since Bodie was in the hospital so much of that time, I was able to see Cindy and Jeff when they would bring Isaac down for various appointments at CHLA. Cindy and I had such big dreams for playdates with the boys once they were finally out of the hospital at the same time.


That never happened. Bodie's and Isaac's stories were intertwined from before the beginning, and the end was no exception. The day Bodie was discharged from the hospital in July, as we were driving home from the hospital, I got a text from Cindy that Isaac had been called home to Jesus. His little body had fought a horrible virus and just couldn't fight any longer. Oh how very bittersweet. On the same day my little boy was finally going home, his heart brother Isaac was going HOME.

And there we sat Saturday afternoon, Dusk, Cindy, Bodie and I, with a space large enough between us to acommodate a football field of little boys. But it only needed to hold one. Sweet, sweet Isaac. We so wish it could have been different. We will miss you forever Isaac and you will never be forgotten. We cannot wait for the playdates in Heaven someday. Love you Isaac.