The price of normalcy

This might be a tough post to read, so I'm apologizing in advance. But I don't shy away from the tough stuff, because truly, that's what life is all about, and I find that is where God shines through my writing the most. So, here goes...

We have worked very hard at allowing Bodie to live as normal of a life as possible in spite of his completely abnormal physiology. Of course, we couldn't do this at the beginning when he was inpatient for so long. But since then, I really think we've been successful with that. I would say we take pride in it, but really it has nothing to do with us, so much as it has to do with God blessing us with enough stability in Bodie's health that we're able to allow him this normalcy.

He goes to the nursery at church on Sundays and loves it. He comes with me to watch Sierra at gymnastics and runs around like a maniac, climbing the bleachers and screaming excitedly at the kids climbing the ropes (wish I could say everyone appreciates his excitement as much as we do, but, well, we all know that wouldn't be the truth. Ha!) He plays at the park, he goes bananas at the indoor play structures at McDonald's. He rides in the basket part of the shopping cart (and I don't sanitize it before putting him in - gasp!) He gets all up into germy stuff and we just say "ok, he's living his life." He once ate potato chips from between his toes (true story). (And ok, if I'm being completely honest, I cringe when he gets into the icky, sticky stuff since I don't do that too well - but he loves it, so we let him into it.) This kid has an insane zest for life and we don't shelter him from life - AT ALL.

He goes to preschool 3 days a week all day and LOVES it. He is absolutely thriving there. Yesterday, when I dropped him off, there was a book in his folder with pictures and artwork from his past few months at the school. It included this picture. 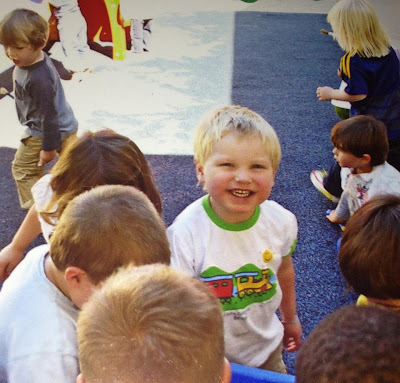 It just made my heart smile to see this picture. It honestly was everything I never dared to dream of when I was pregnant with him. He was just playing with his friends at school, goofing off, having a blast just like any other 3-year old at preschool. His teachers have welcomed him with open arms and let him just be a "normal" kid.

Herein lies the rub. Bodie thinks of himself as just a "normal" kid. He does know about his heart, but I'm pretty sure he thinks every kid has had multiple surgeries. This "normal" kid is now out of his beloved preschool and on quarantine from large groups of people (other than his Mother's Day Brunch at school this Friday) until May 22nd for his cath. And then he'll be going into the hospital where he'll have iv lines placed, be put under and have dye injected into his heart - and may have part of his heart cauterized (that's a fancy word for burned). And that's nothing compared to what is coming in July.

There is a part of me that feels like maybe if we sheltered him a little more, or allowed his heart to limit him a little more, all of this would be a little bit easier to prepare for, for him and for us. That, if he looked at himself as medically fragile, the medical procedures wouldn't come as much of a surprise. That part is small, but it is still there, nagging a little bit.

I don't regret anything we have done to allow him as much normalcy as possible and wouldn't have done this any other way. As long as his body will allow it, we will always allow him to live life to the fullest. But as with every decision we make as parents, our decision to let him life a "normal life" does come with consequences. This is one of them.

We covet your prayers in the weeks and months ahead as we prepare Bodie, Sierra, and our entire family for this - and that we manage to maintain as much "normalcy" as possible.