So, I am great at pushing on through trials and tribulations, acting like everything is normal. I mean, we're talking I am super at it. As in, if they gave an Olympic Medal for "biggest faker and best at acting like everything is totally fine when it's not even close to totally fine" I would so be up on that podium, singing my national anthem and basking in all my glory. Yup, that's me.

My "everything has to continue on like our lives didn't just bottom out underneath us" attitude has been in overdrive, since the fire, really. It's the same attitude, by the way, that drove me, the night of the fire, to search through the kids waterlogged, ash filled and ruined bedroom for 45 minutes to find Bodie's missing t-ball cleat because "he has his first t-ball game tomorrow and he's NOT missing it." True story. In my quest for life to continue on as normally as possible, I wasn't even giving us a chance to acknowledge that our lives were not going to be normal again for a very long time. And that it was ok. It was not making excuses.

Anyway, I digress. This trait of mine, it's kept us at this full throttle speed toward keeping up a sense of "normalcy" for us, without acknowledging that a slower pace would be totally acceptable right now. So, the kids are at their t-ball and softball games, we're at church on Sundays, we're having birthday parties and making summer plans. You know, just like everything is normal.

So, I shouldn't have been surprised when my mom was in town last weekend and casually asked why people were still bringing us meals when really, we have this amazingly beautiful, working kitchen now. 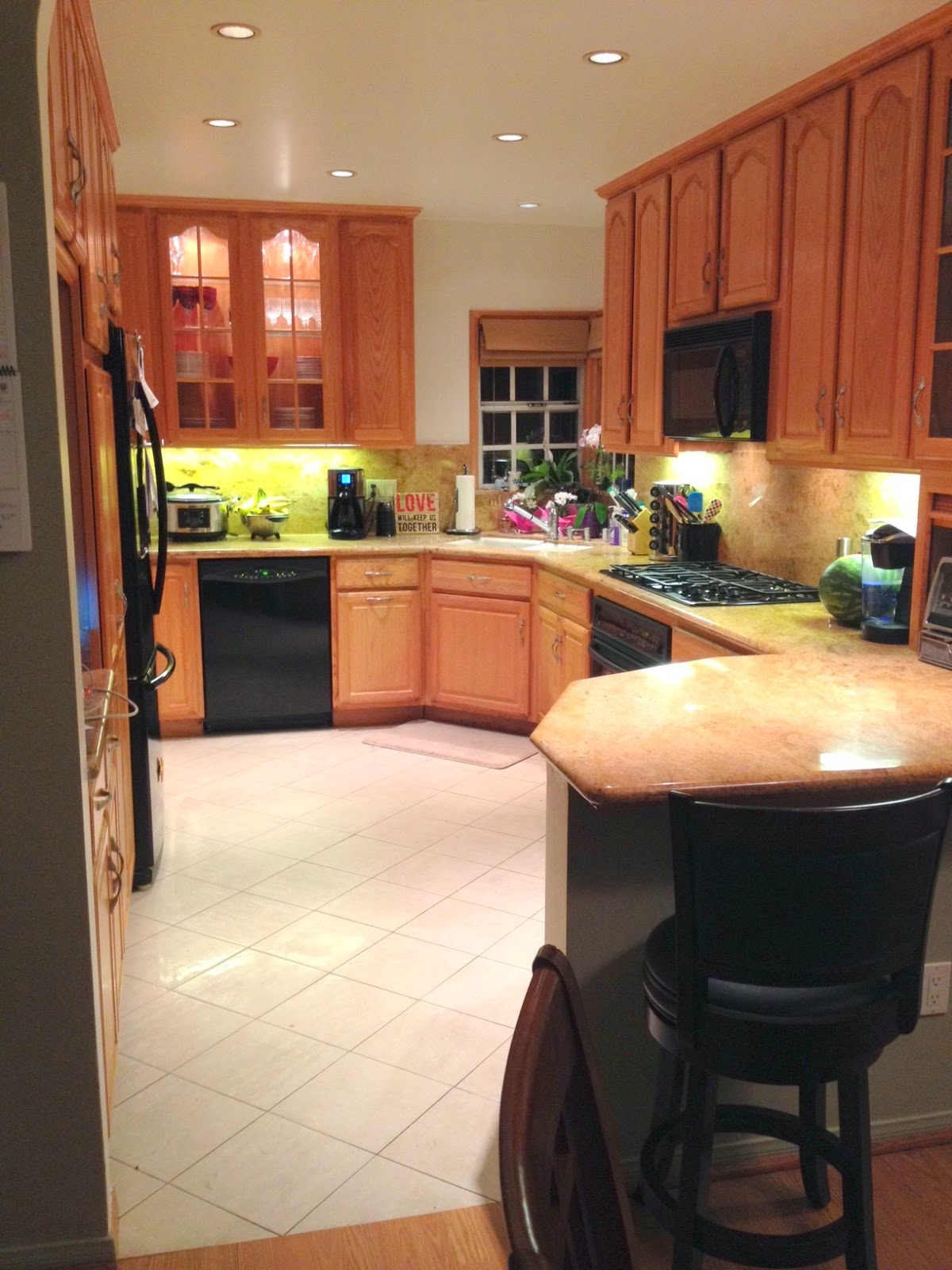 (and it's totally a legit question. I mean, really, it's beautiful, right?)

But, I gotta say, our lives still aren't normal. There is so much aftermath to a fire that you don't even think about.

Like the fact that I only last week got my printer back. Having a home printer isn't a big deal - unless you work from home - and you're used to having it. Everything requiring a printer kind of slid to the back of my (already overflowing) plate. SO glad to have my printer, but I have SO much to do now!

Or the fact that we have random bugs around here (pincher bugs, a cockroach or two, lots o' spiders, etc.). And we have Terminix on it. But because we didn't plan this move and all of our stuff was put in boxes, moved to a warehouse with other people's stuff in boxes and then brought into this house, we don't know - did we bring the bugs somehow from our house? Were they already here? Did we pick them up in the warehouse? Is it just an isolated thing or are we about to be facing an invasion of bugs? FUN stuff!

Or the fact that we put in a permanent change of address with the post office (because you have to specify an end date for a temporary hold and we don't have a specific end date yet), figuring they'll forward for up to a year, so we're good and don't have to actually switch our address with anyone....except that the post office, unbenownst to us, sent out change of address notifications to some (but not all!) of the people sending us mail. And we get to guess who got the notifications! SUPER awesome. Can we pause for a moment and send good thoughts and prayers that the DMV is not on the list of the lucky recipients?

And speaking of not having an end date, they haven't started reconstruction of the house yet. Actually, they haven't even pulled the permits yet. They're close, from what we hear. But, even so, LA County is looking at 8-12 weeks for permit review. And then they can start reconstruction, which should be 6-8 months.

And what about pictures? Do we bother putting up pictures in a house we're moving out of maybe 10 months from now? We want it homey, but, really, who wants to be trying to fill nail holes when we're moving back into our old house at the same time?

Or my favorite. The kids' bunk beds. One of the very few items the salvage company is attempting to salvage. We just got it back on Thursday. SO exciting! But, we had to replace all of our mattresses, including the kids. Which was fine. Except... 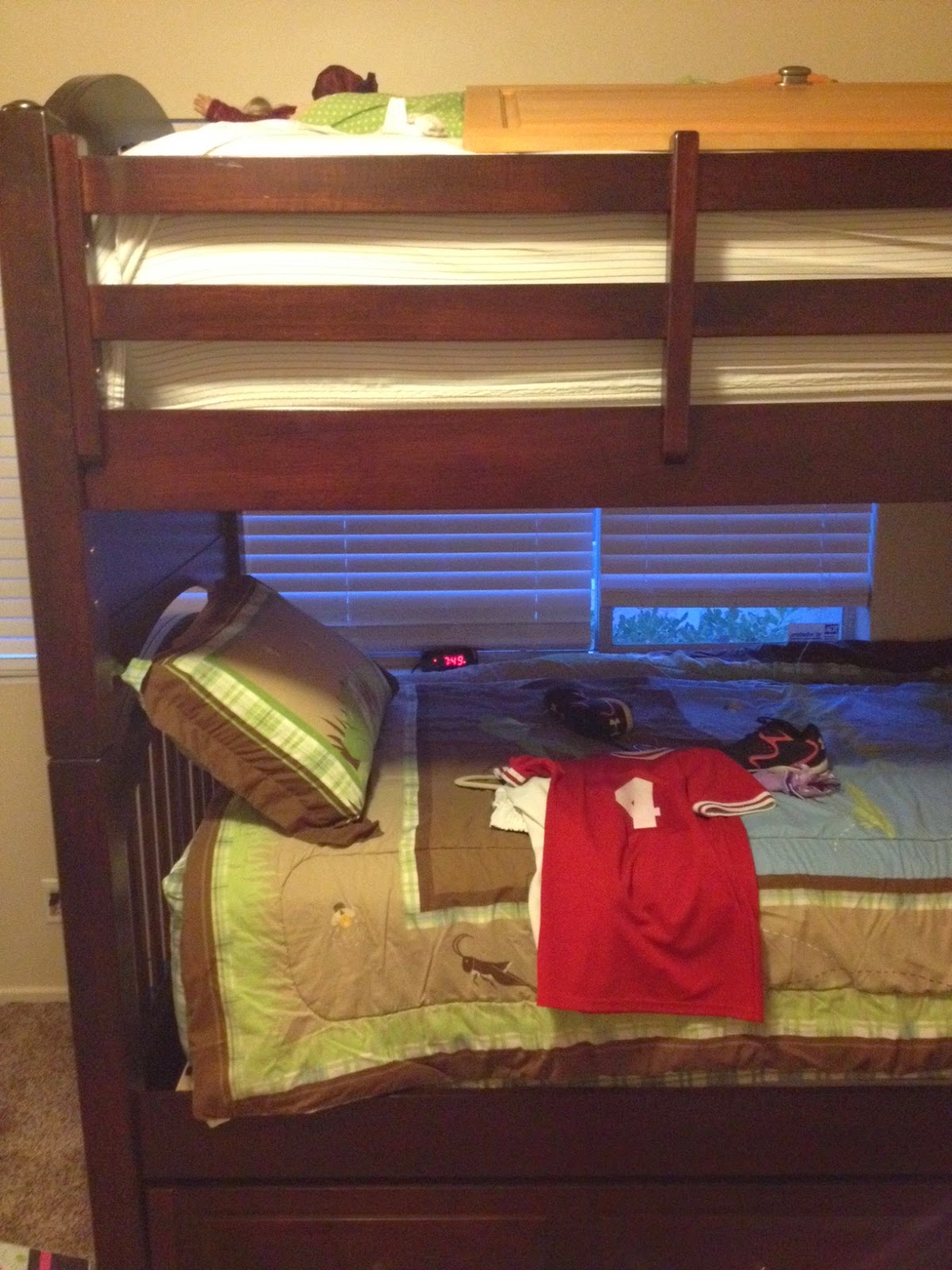 We didn't have the bunk bed when we ordered our mattresses, so ended up with mattresses a bit higher than even the railing on the bunk bed. It's like a perfect launch pad to send Sierra hurtling to the floor (you know, if she can make it past the ceiling fan first). Super safe, right? Who would have thought we'd end up with THAT problem?

So, Dusk went right to work trying to create a solution... 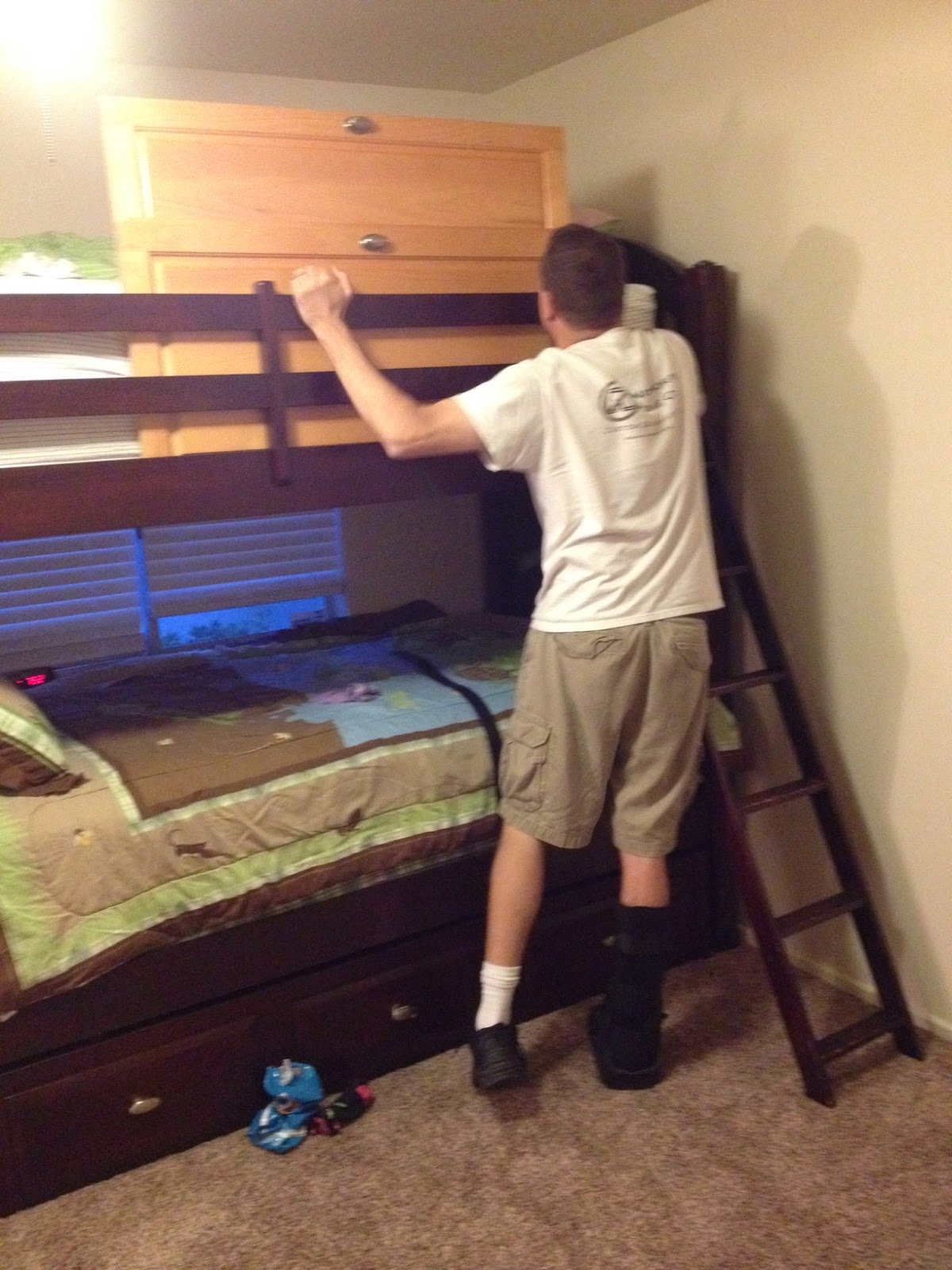 Oh, and by the way, see that boot on his right foot? Yeah, he broke it a couple of weeks ago. We found out by having x-rays done at the chiropractor I've been seeing. Turns out my lower back is badly compressed and I've started spinal decompression. Fun times.

Our lives are kind of a hot mess right now, no pun intended. Anyone who knows us knows that we were already at our max prior to the fire, and didn't exactly have any margin left for major, life changing events. (I've never had much margin (you know, extra s in your life?) - I'm not sure I would know what margin was if it slapped me in the face.)

And the aftermath of a fire is just plain huge. It affects everything. Our local pet store caught fire last week. Everytime I drive past the boarded windows, I draw in my breath, reliving that moment of watching my home on fire, the flames driving up into the sky. That feeling of utter helplessness. That moment changes you forever. And the days afterward, sifting through the rubble that was your life before. I know a fire of a business is different than a home, but even so, my heart goes out to the owners and the employees as they embark on the rebuilding journey.

We're a little further along the journey and working through it. And we'll be fine. We'll keep trucking on, because, at the end of the day, this is just life and that's what we do. But, yeah, people are still bringing us dinner (through tomorrow) - and we're pretty darn grateful. Because it allows me to focus my attention on, you know, more important things like acting like everything is totally normal in our lives. ;-)