You had me at "Vacation"

So, Dusk and I have been together like 100 years.
Ok, maybe not that long, but awhile (we've been married almost 12 years and have been together almost 16 - I know, I know, I was clearly a child bride, but I digress…)
Before we had kids, we used to go to Catalina and Baja, Mexico fairly regularly. They were two of our most favorite places to go. But, for a multitude of reasons (Bodie's medical issues, overall safety down in Baja, life getting in the way, blah, blah, blah), we've never taken the kids to either place. So, when my sister-in-law suggested an extended family Baja cruise, we were over the moon!

We took the cruise last week and the entire trip was  straight up, amazing.
I was in awe for so much of it.
In awe that we were really taking our kids to Catalina, to Mexico, to our favorite haunts.
In awe that we were getting to spend so much quality time with my nieces and our in-laws (we hadn't seen our nieces in 3 years!!!).

Mostly, in awe that we were just another family on vacation.
It sounds silly, but that was probably the biggest surprise for me - I was sitting there out by the pool one afternoon with Bodie, stroking his hair in the sunshine over the Pacific, thinking "if you had told me, 5 years ago, when I was facing a deadly diagnosis, that I'd be doing this with a crazy little blonde boy, I'd wouldn't have believed you in a million years."
Amazing.
God's grace a million times over. 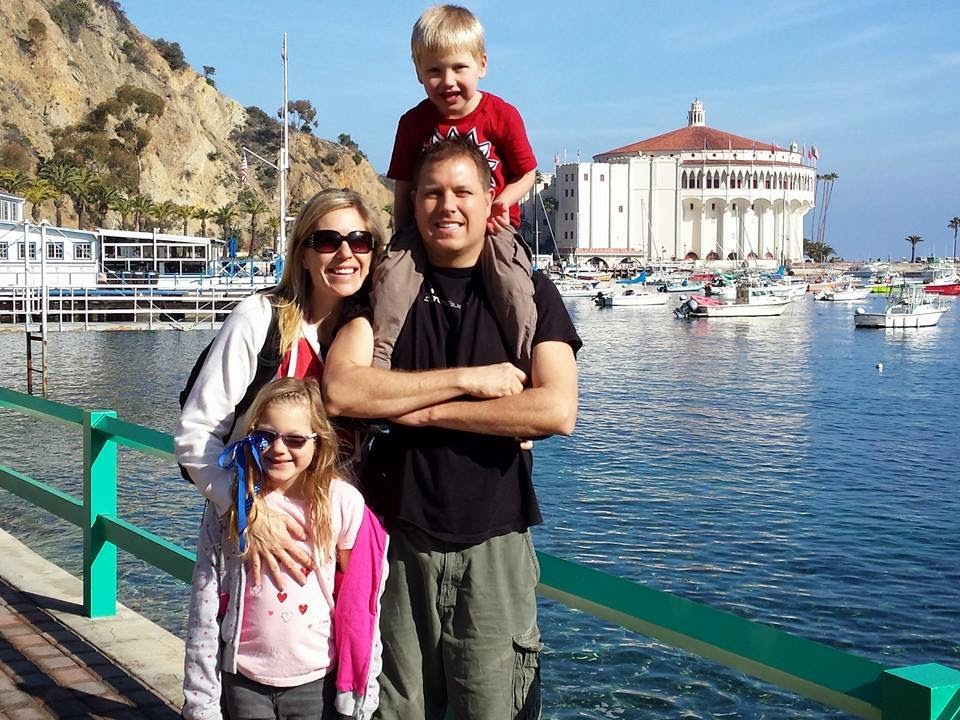 We did Catalina, complete with the submarine trip. SO FUN!!! 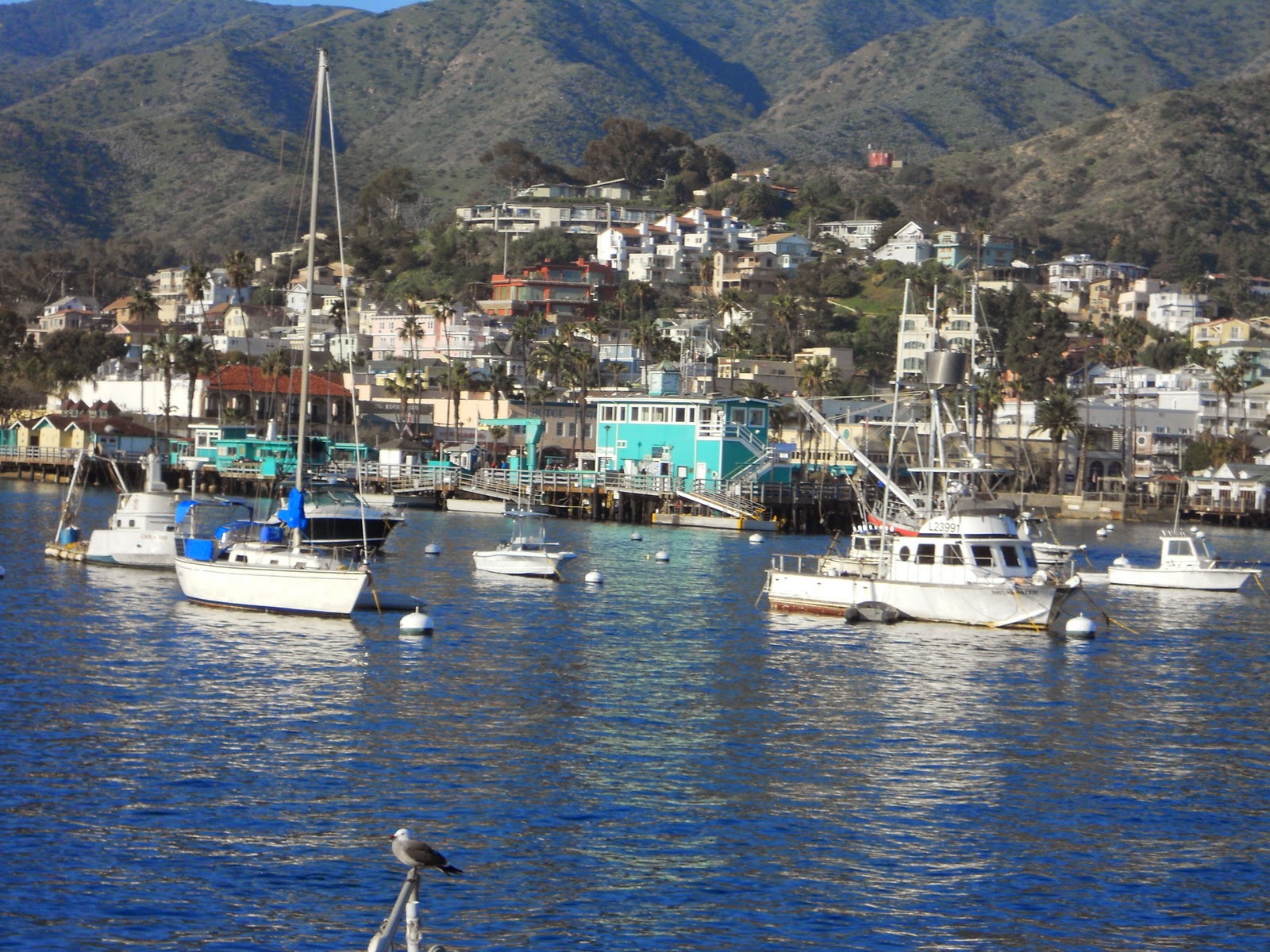 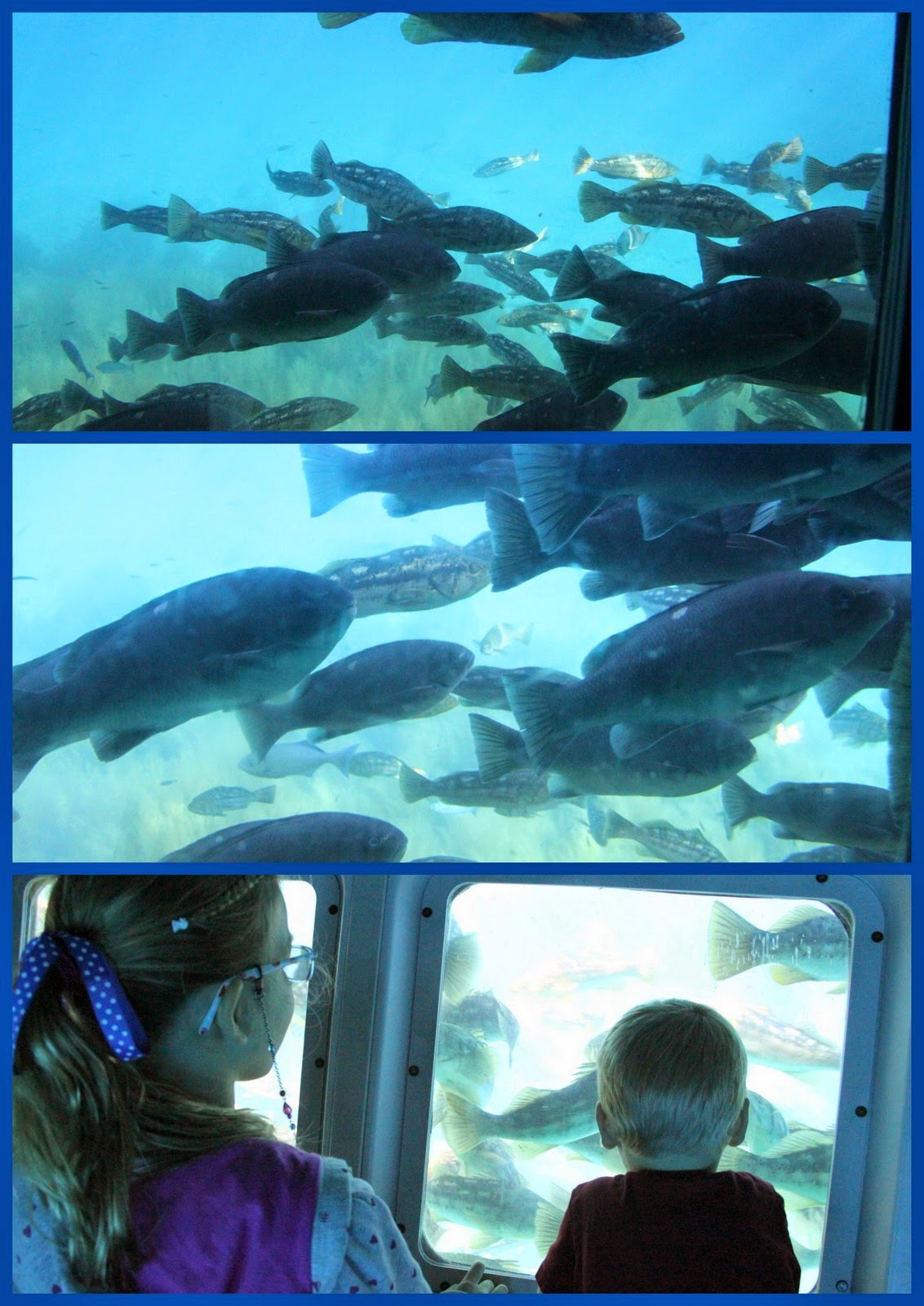 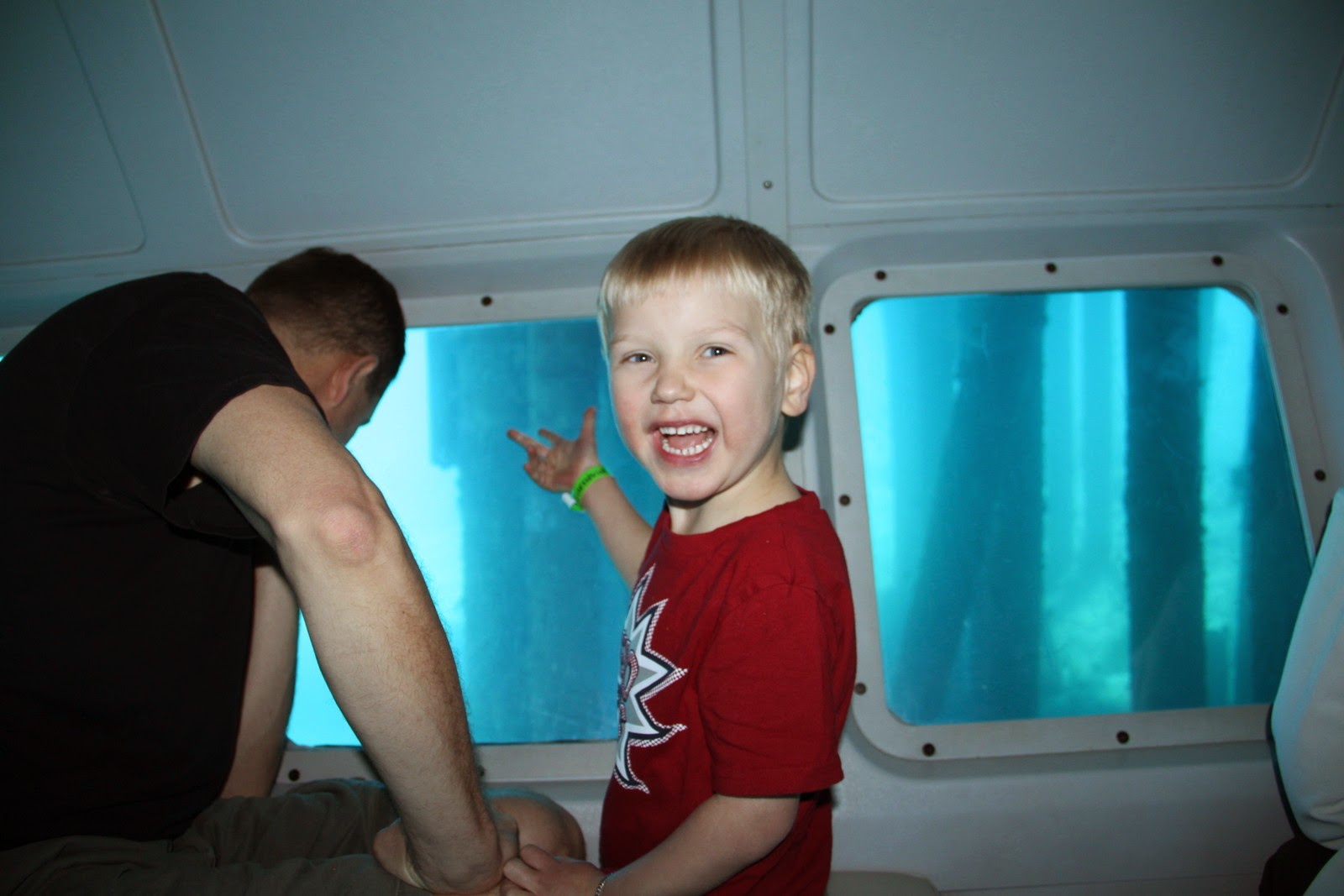 And we did Mexico. 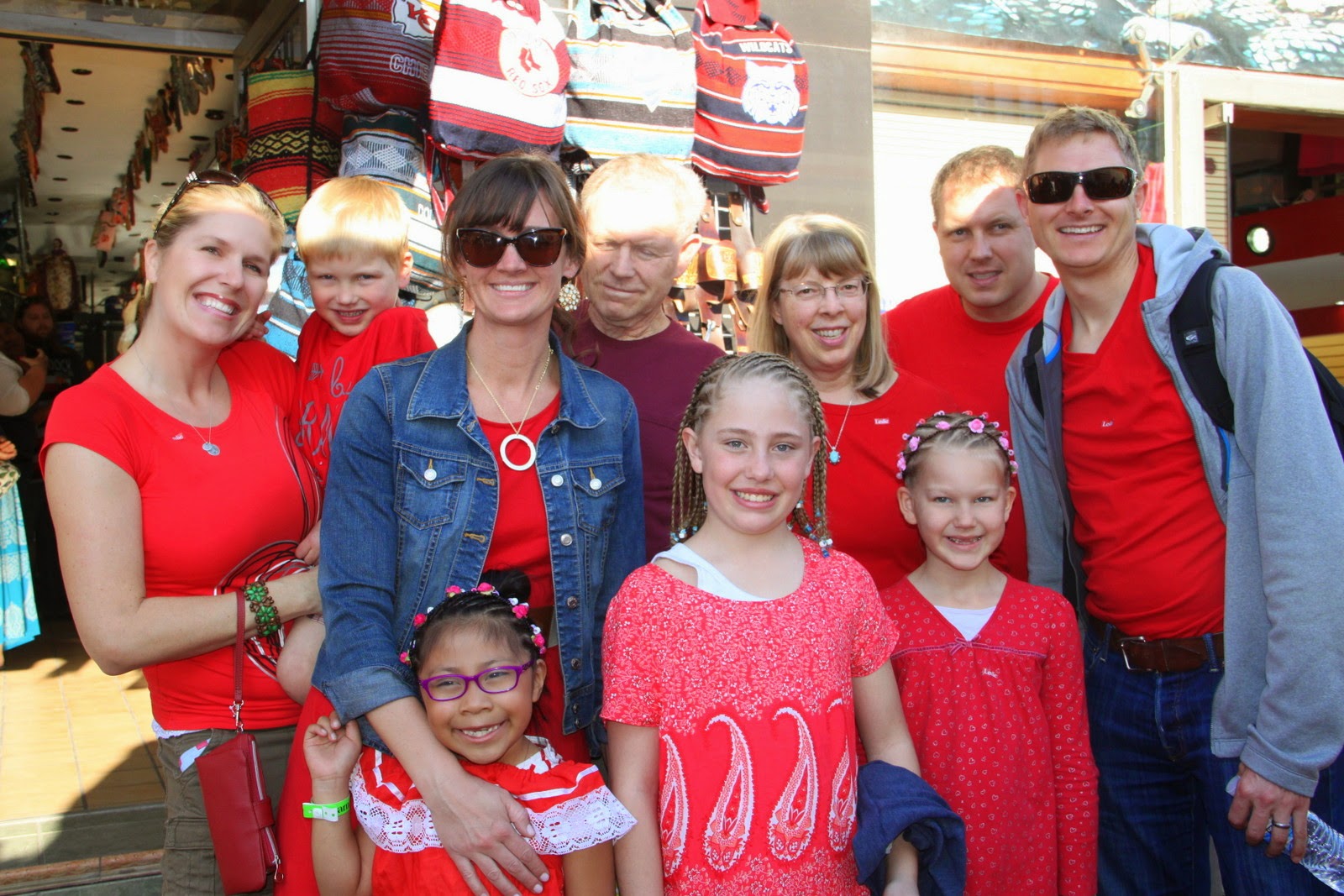 And we did a whole lot of fun in between!!!

Bodie is officially 100% over the moon obsessed with his cousin Hannah. 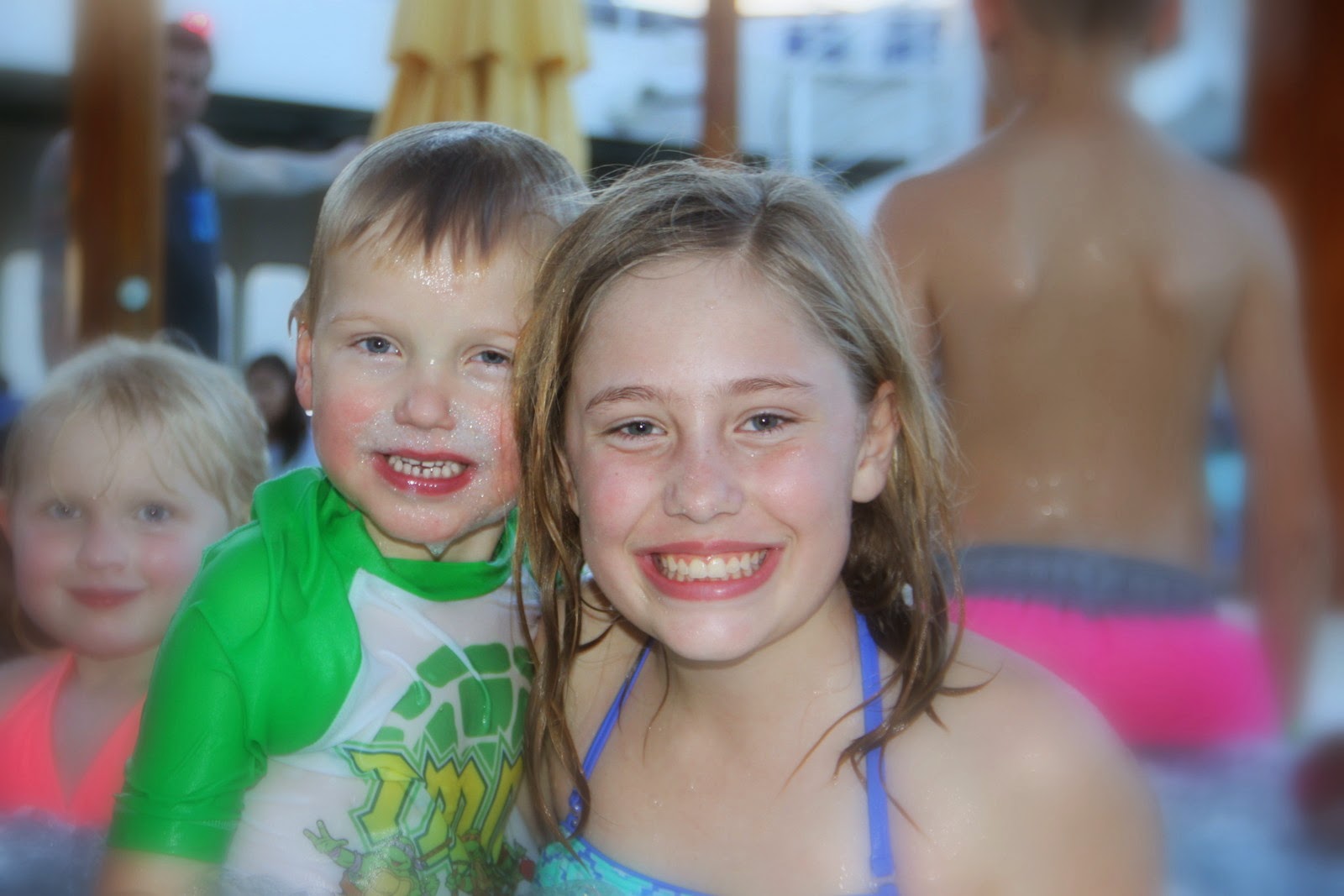 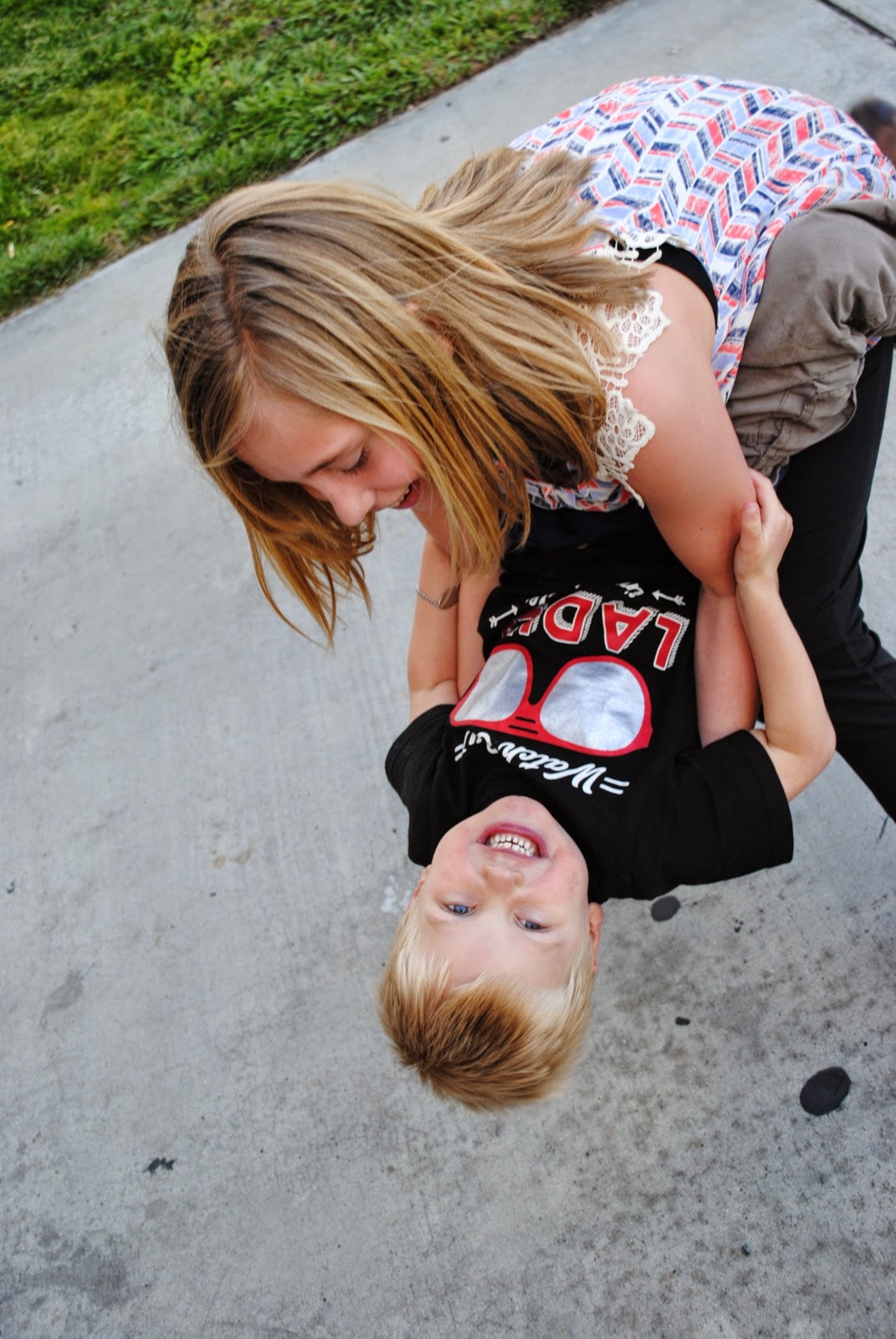 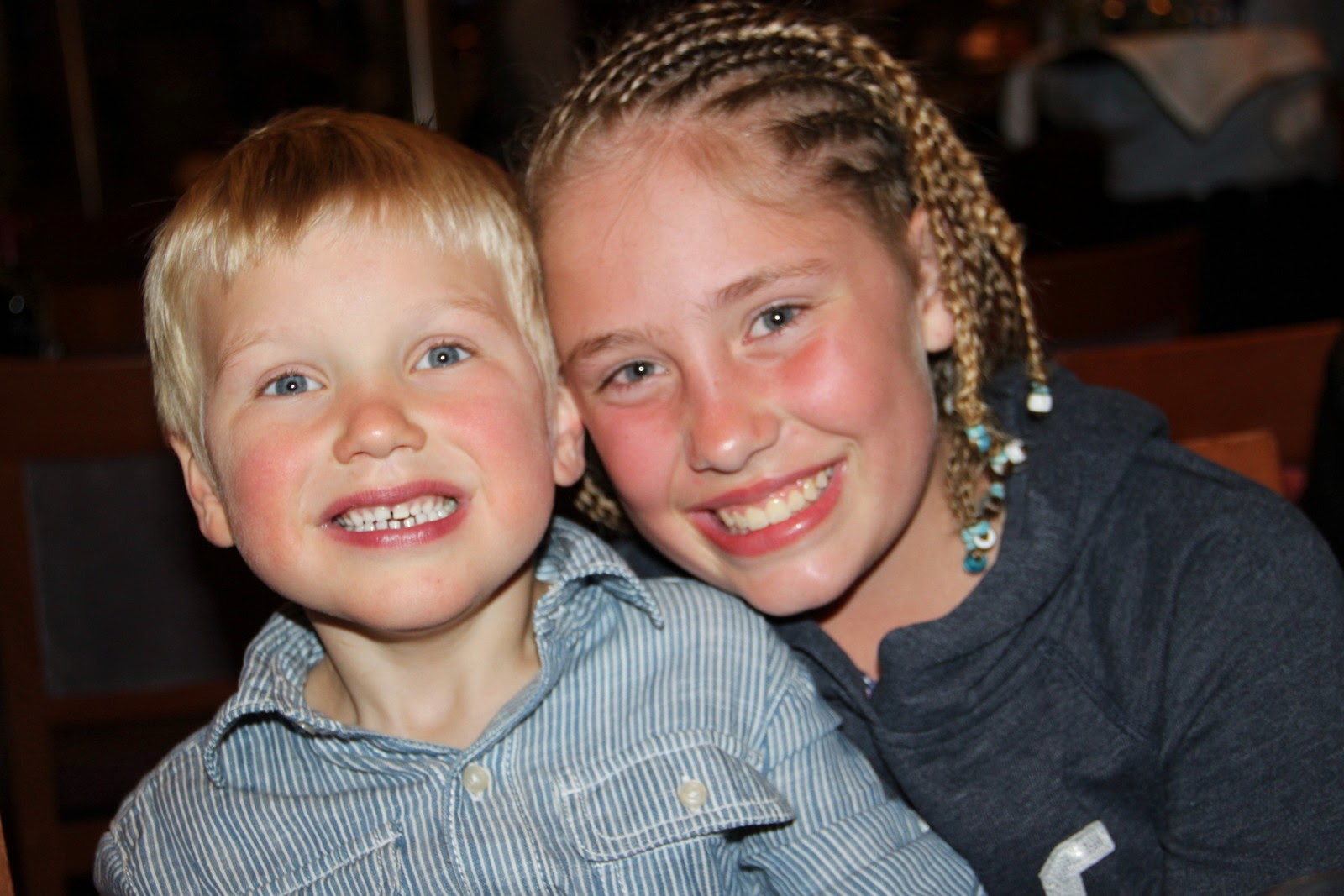 (we're trying to decide whether they were actually siblings in another life - they look SO much alike!)

And Uncle Paul isn't so bad either. 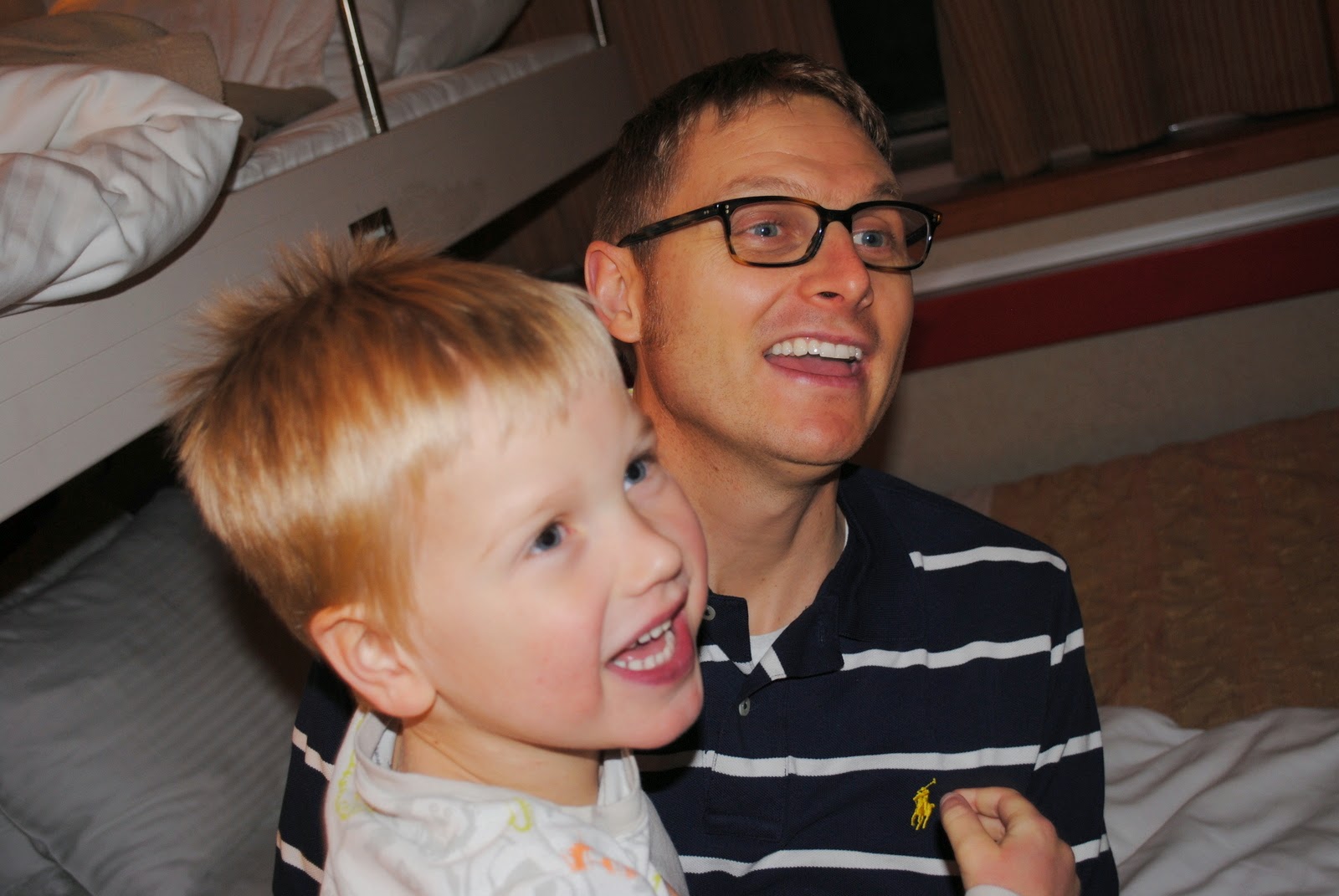 (I love this pic, since Bodie looks exactly like Paul's baby pics - genetics is so fun!)

And Sierra and Amelia, with their matching missing front teeth were beyond adorable. 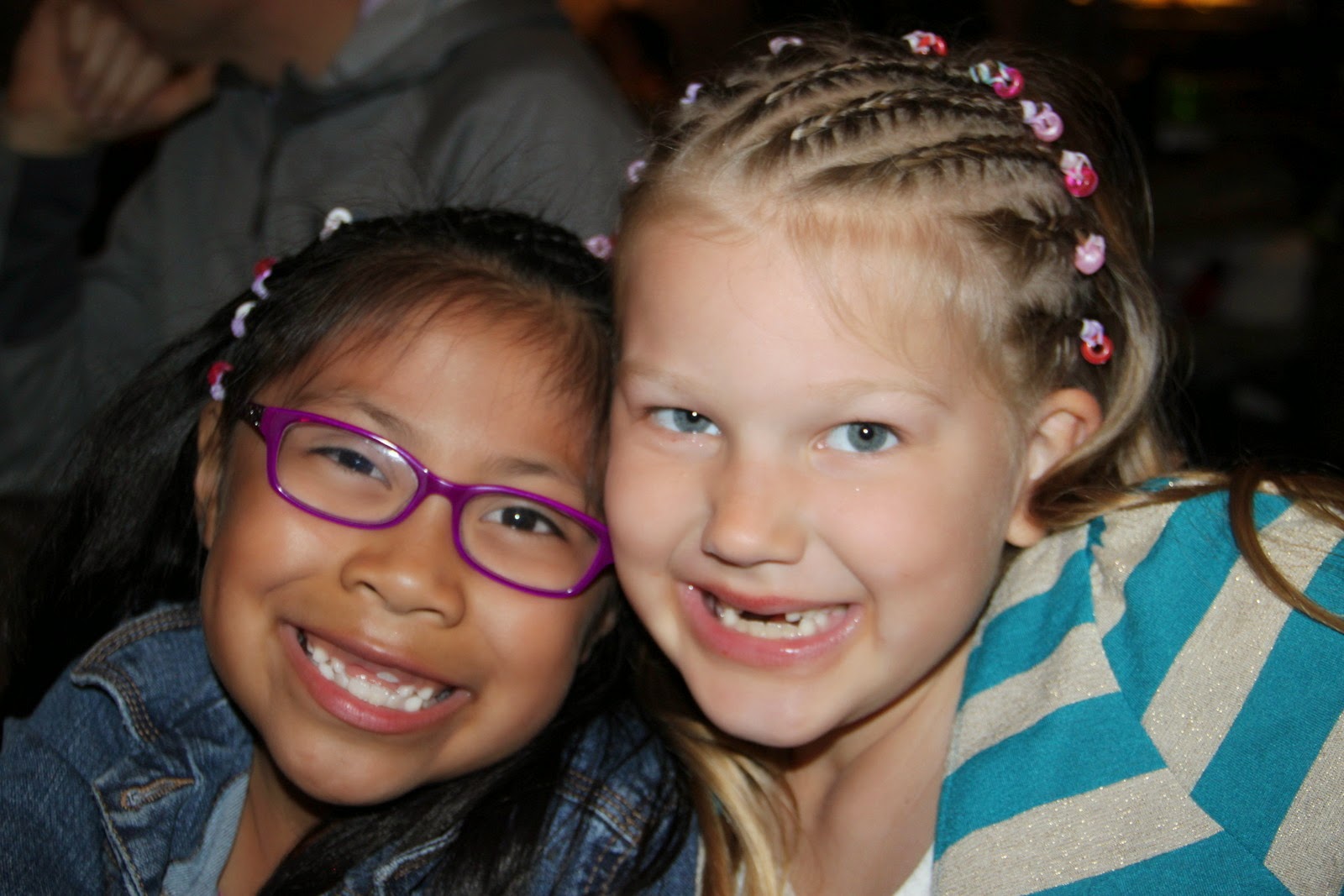 It was so fun for the kids to get to spend so much time with their grandparents, Popo Alan and Grandma Jan. 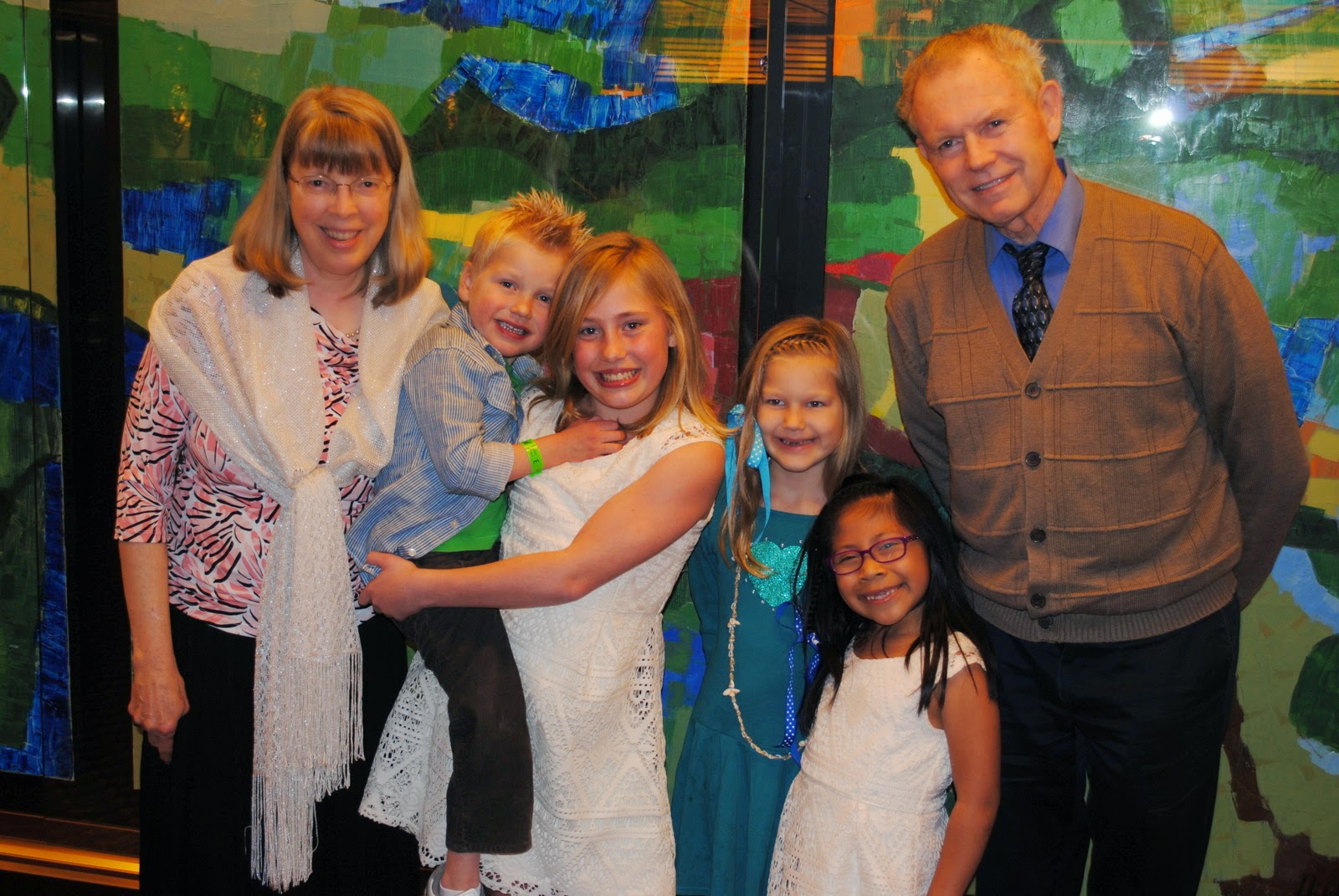 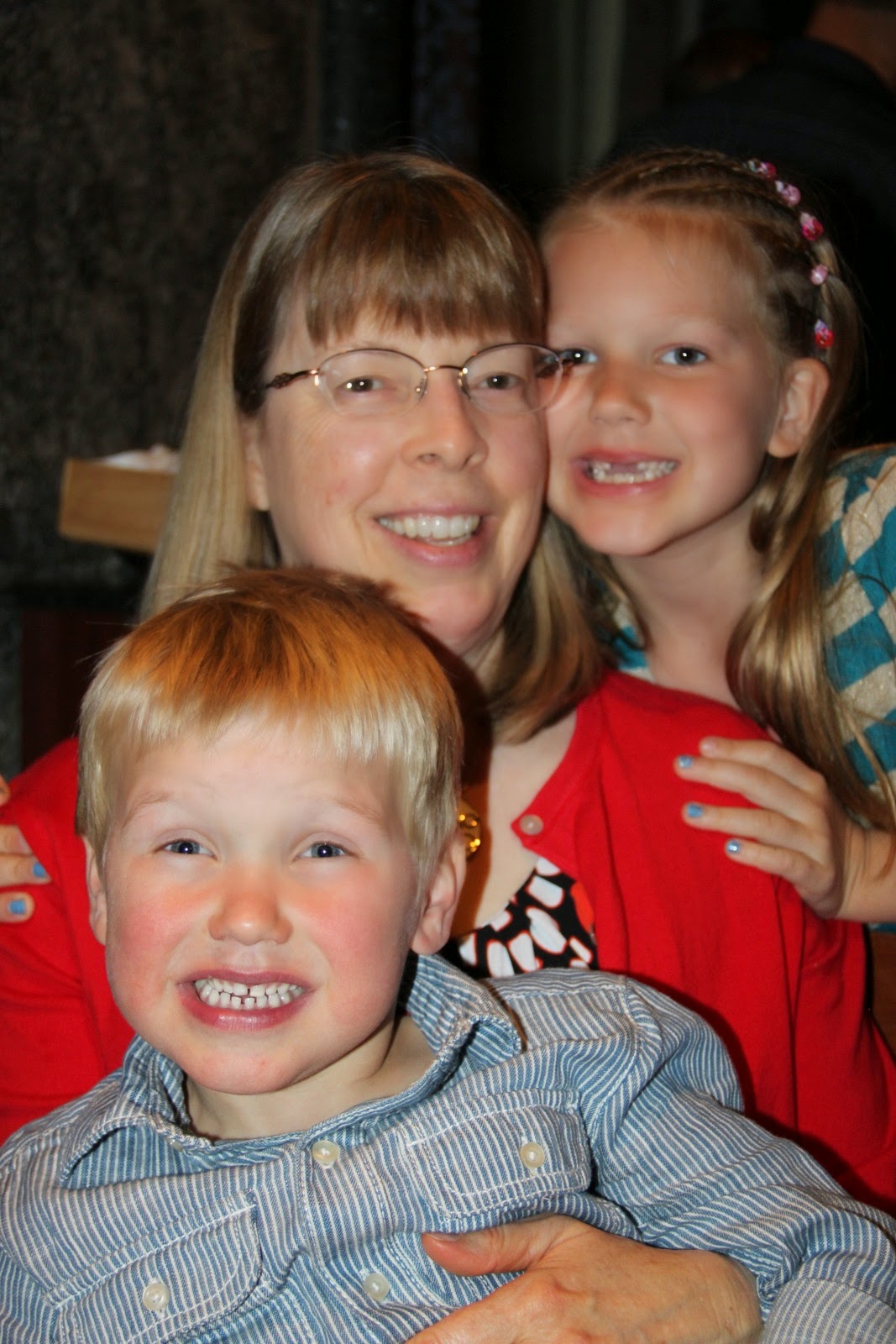 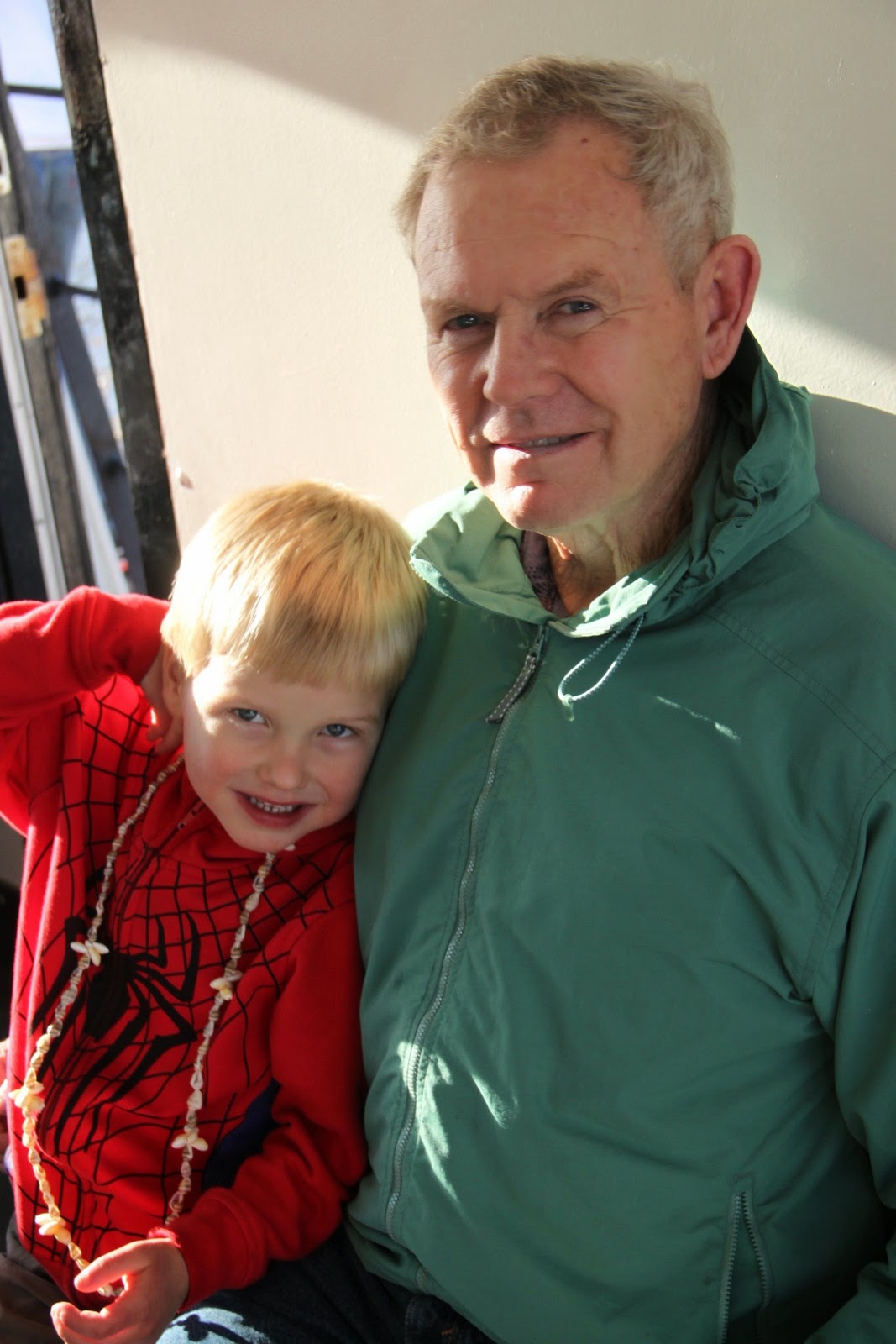 We tried for a family pic.
Really, we did.
Except that Dusk clearly thought "smile!" was loosely translated "give your best mug shot face." 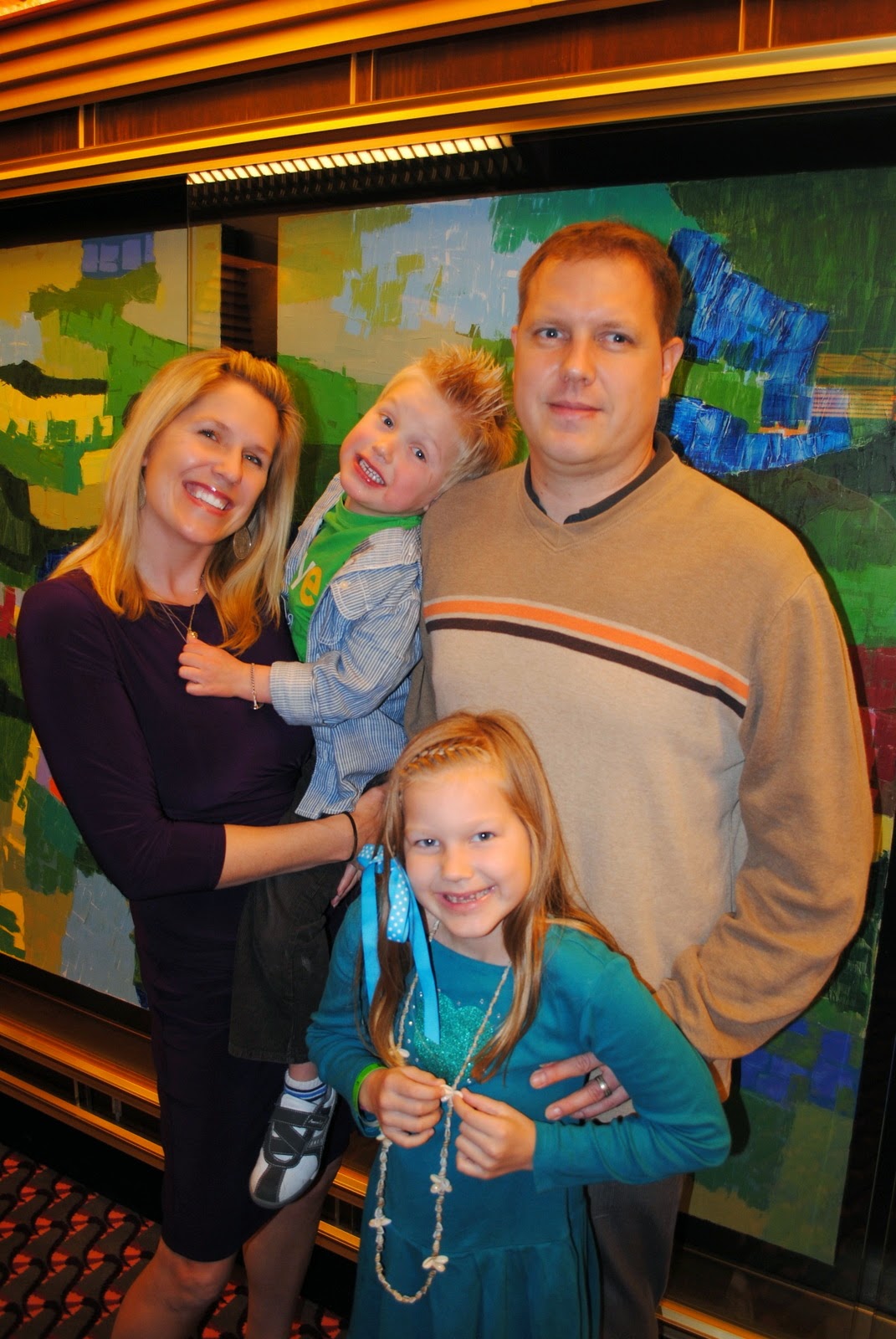 We wore red in Mexico for CHD Awareness Day!
(if you wore red and haven't tagged me on Facebook or emailed me at amykbennett@gmail.com, it's not too late! Please send me your pics! And even if you forgot, just wear red today and pretend like it's the 6th - I won't tell anyone, don't worry!) 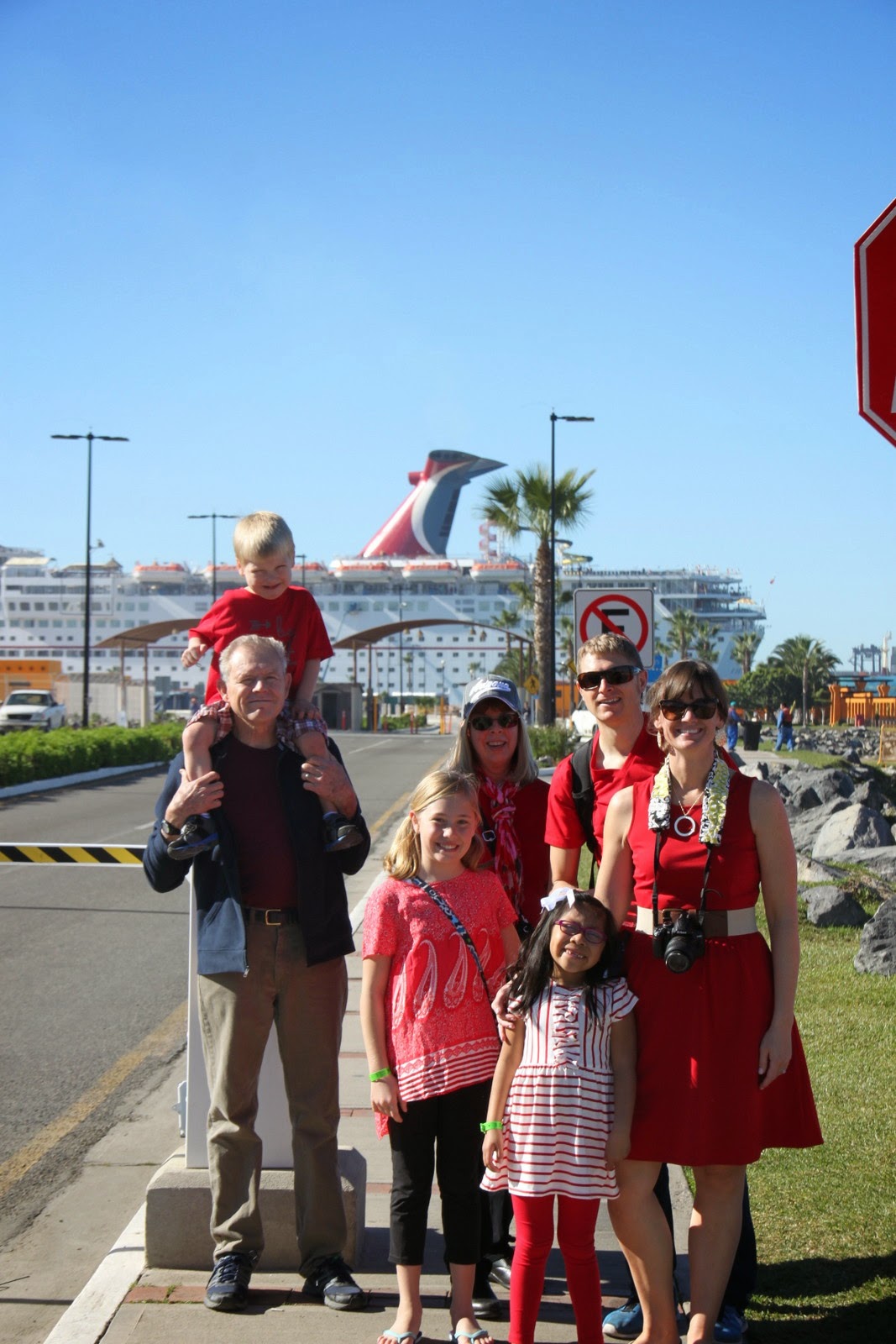 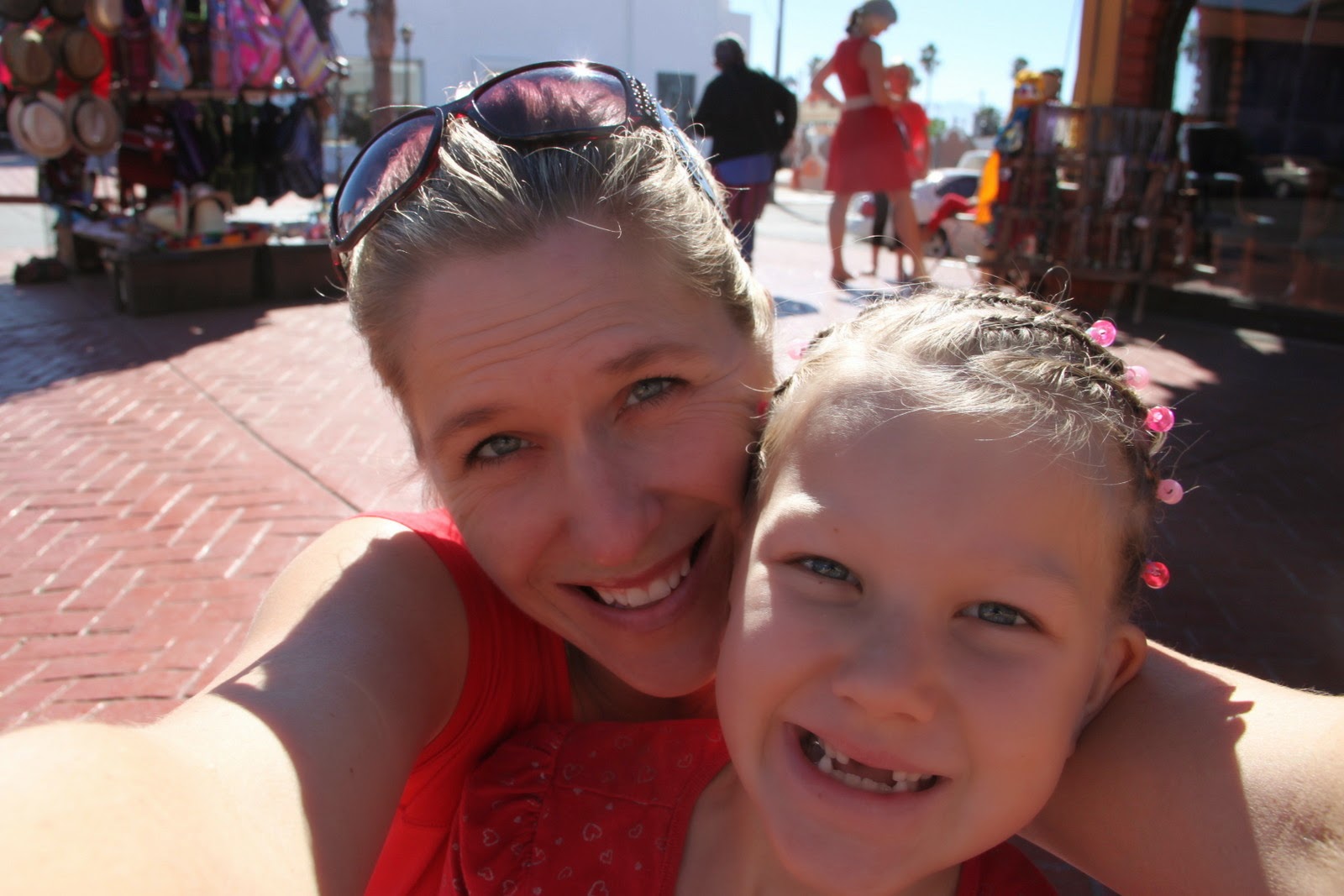 We had great fun at the dinners on the cruise!
We celebrated all 4 of the kids' birthdays on one night, since they're never together for their birthdays.
Bodie was pretty excited. 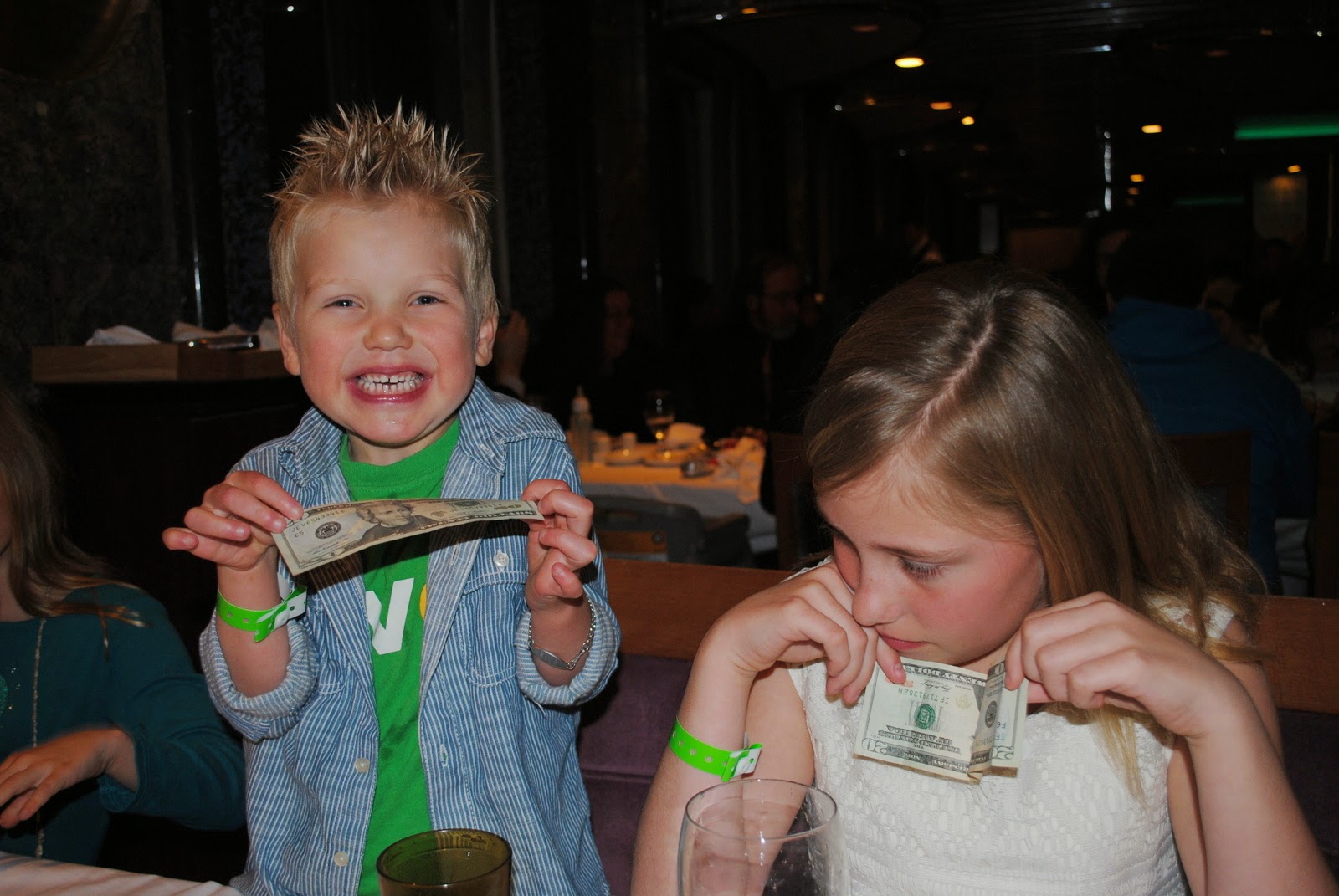 All the kids got cash to spend in Mexico. So fun! 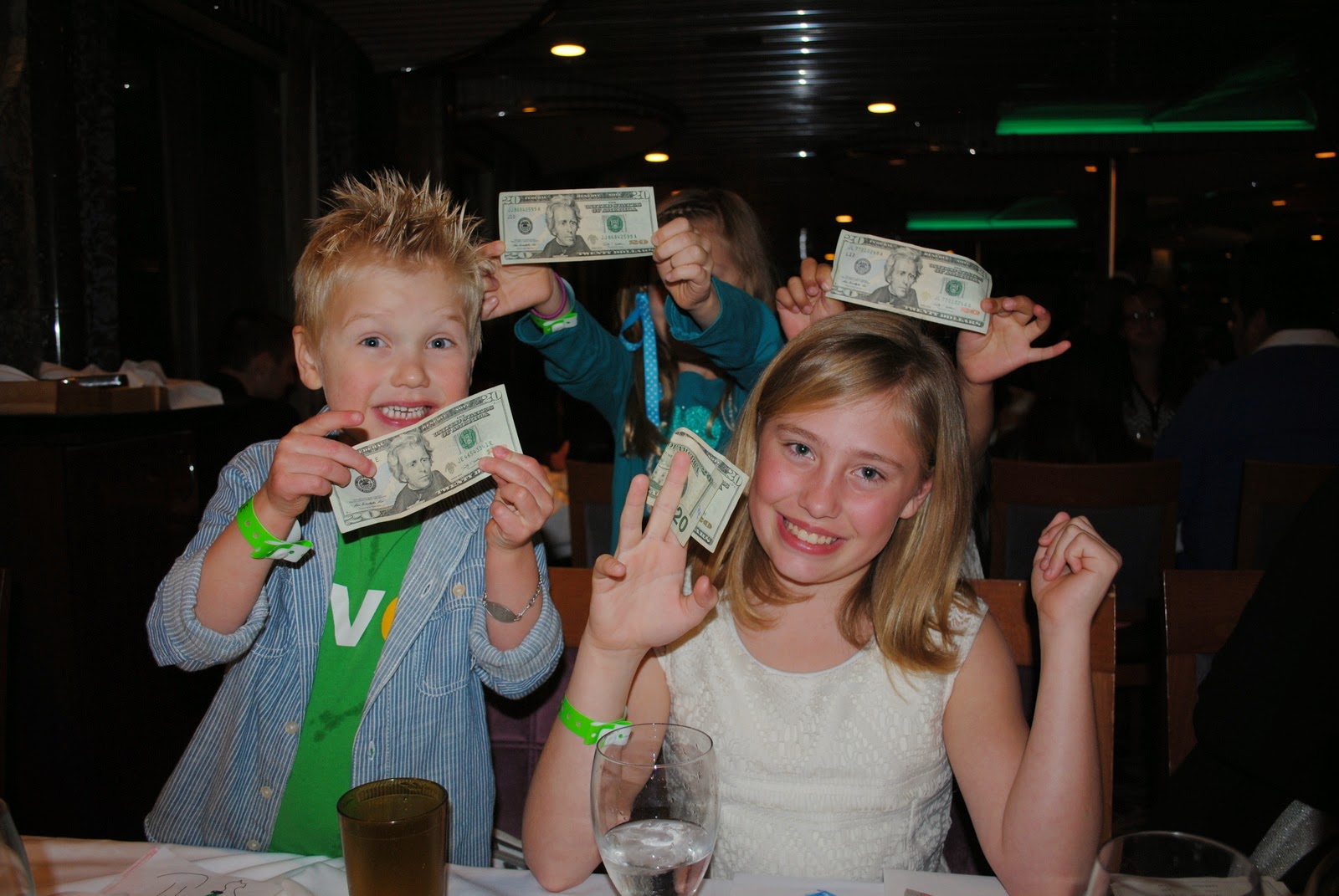 I love these pictures. Sierra and Amelia took these silver shells off the table and pretended to play telephone with them.
Which of course caused a big huge fight when Bodie wanted them as well.
You can see him reaching for the shell in the top one.
When he was unable to steal the shells, he and Hannah made do with the butter dishes.
It was adorable. 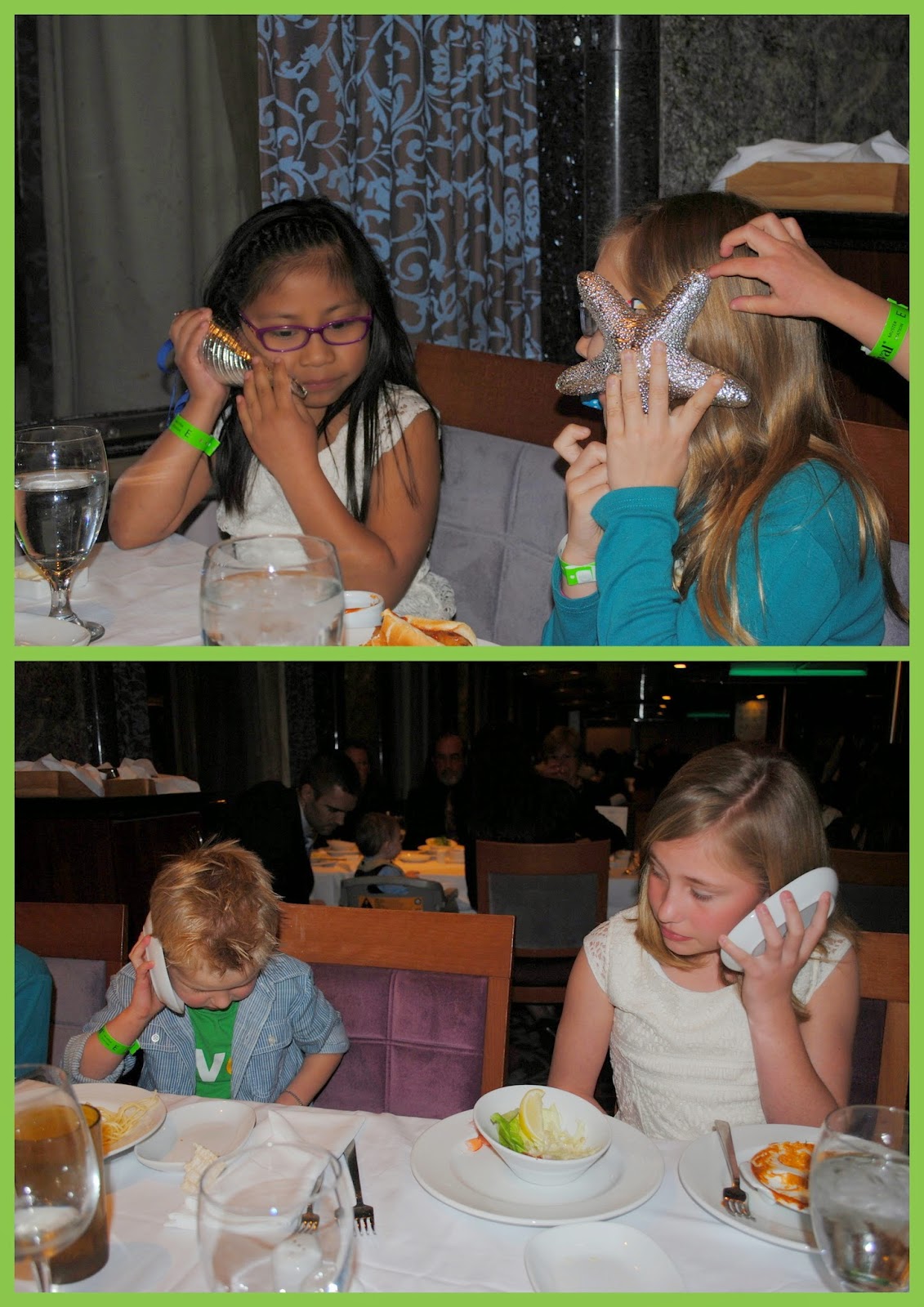 This was one of our waiters at dinner, Josico. Bodie LOVED him. 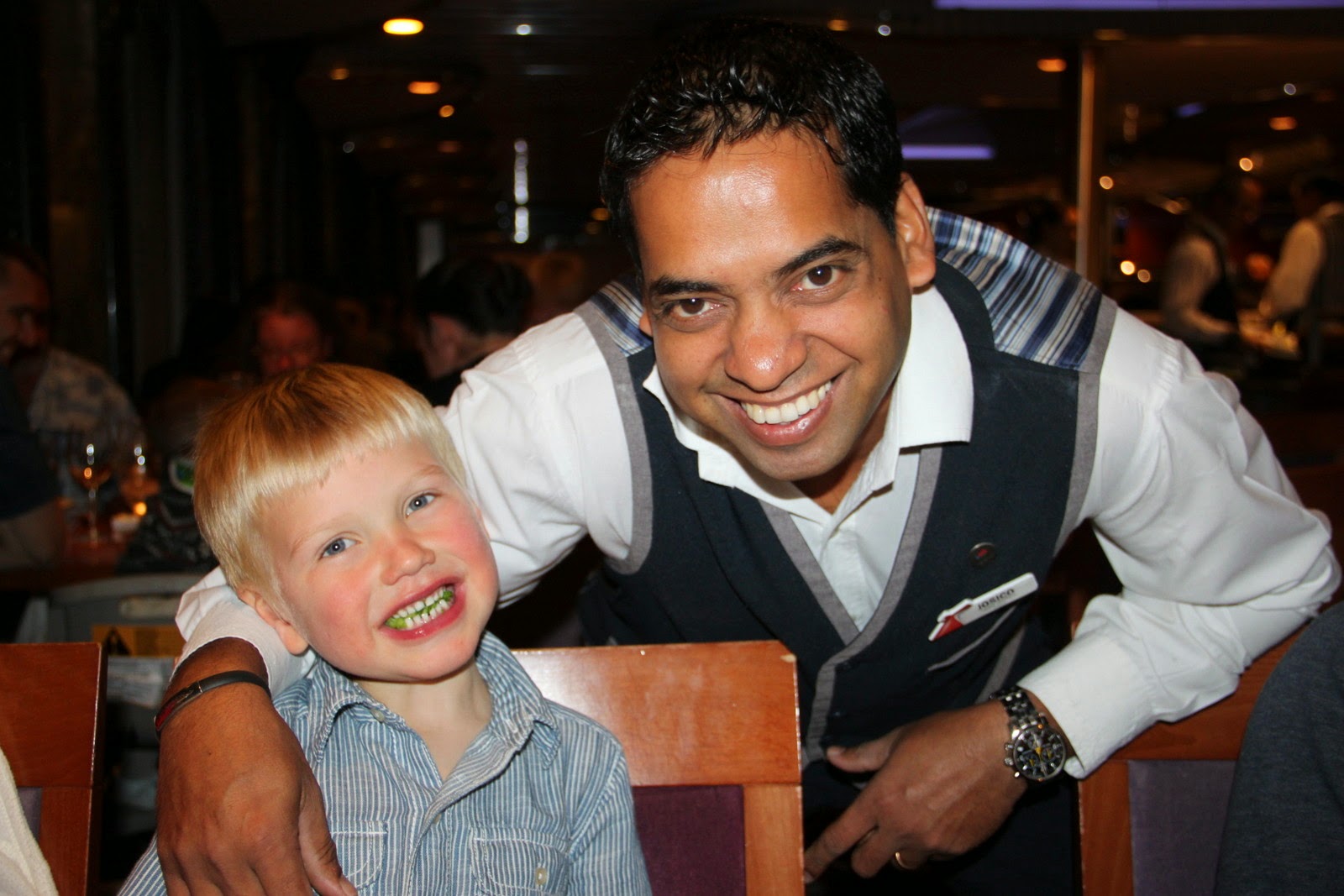 So much so, in fact, that Bodie sobbed our last night on the ship, when he realized he wouldn't be seeing Josico anymore. 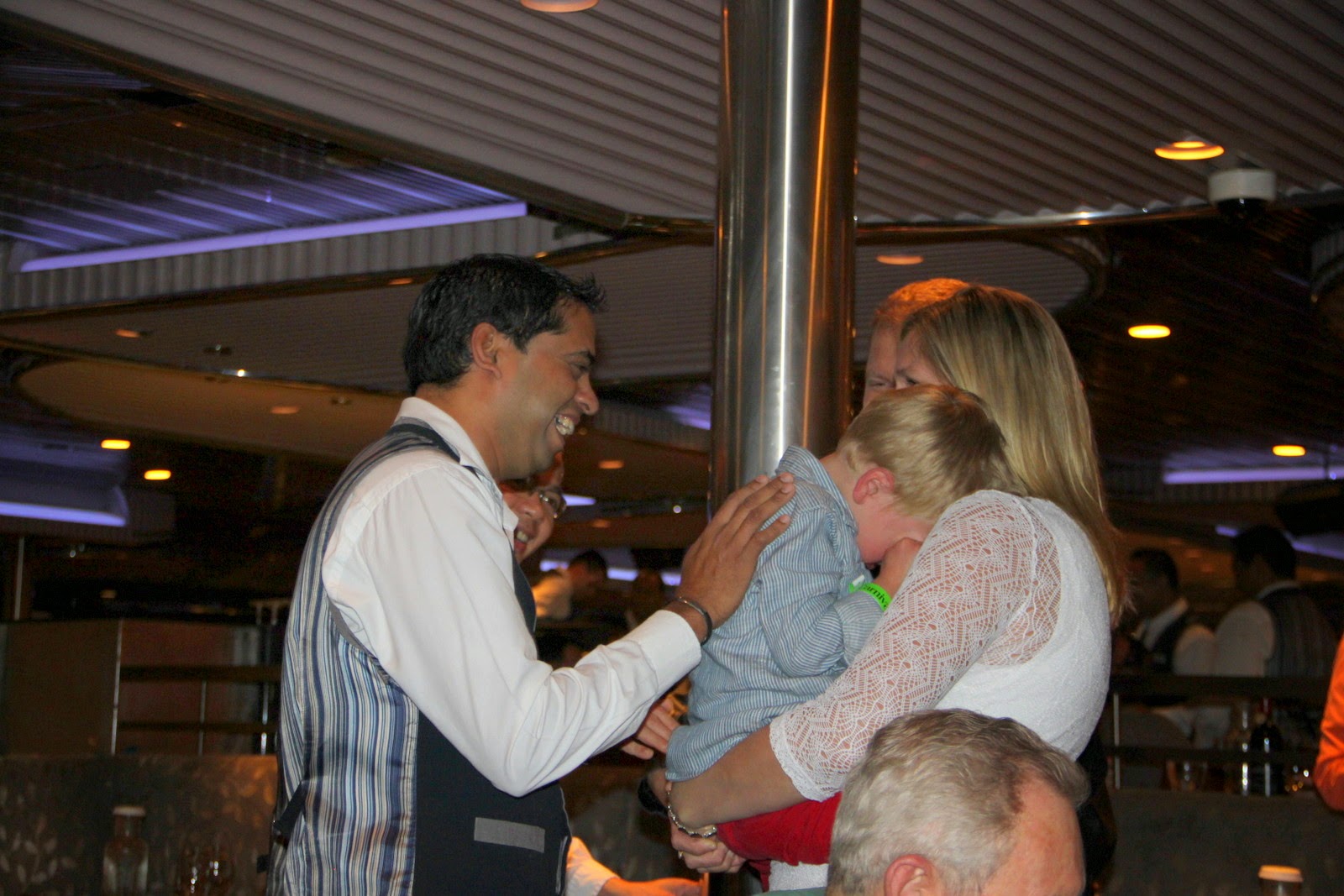 No really. He sobbed.
Buried his face in my shoulder and friggin cried buckets.
If we know nothing else about Bodie, we know he's a lover.

I'll leave you with these two pics, which pretty much sum up, well, everything. 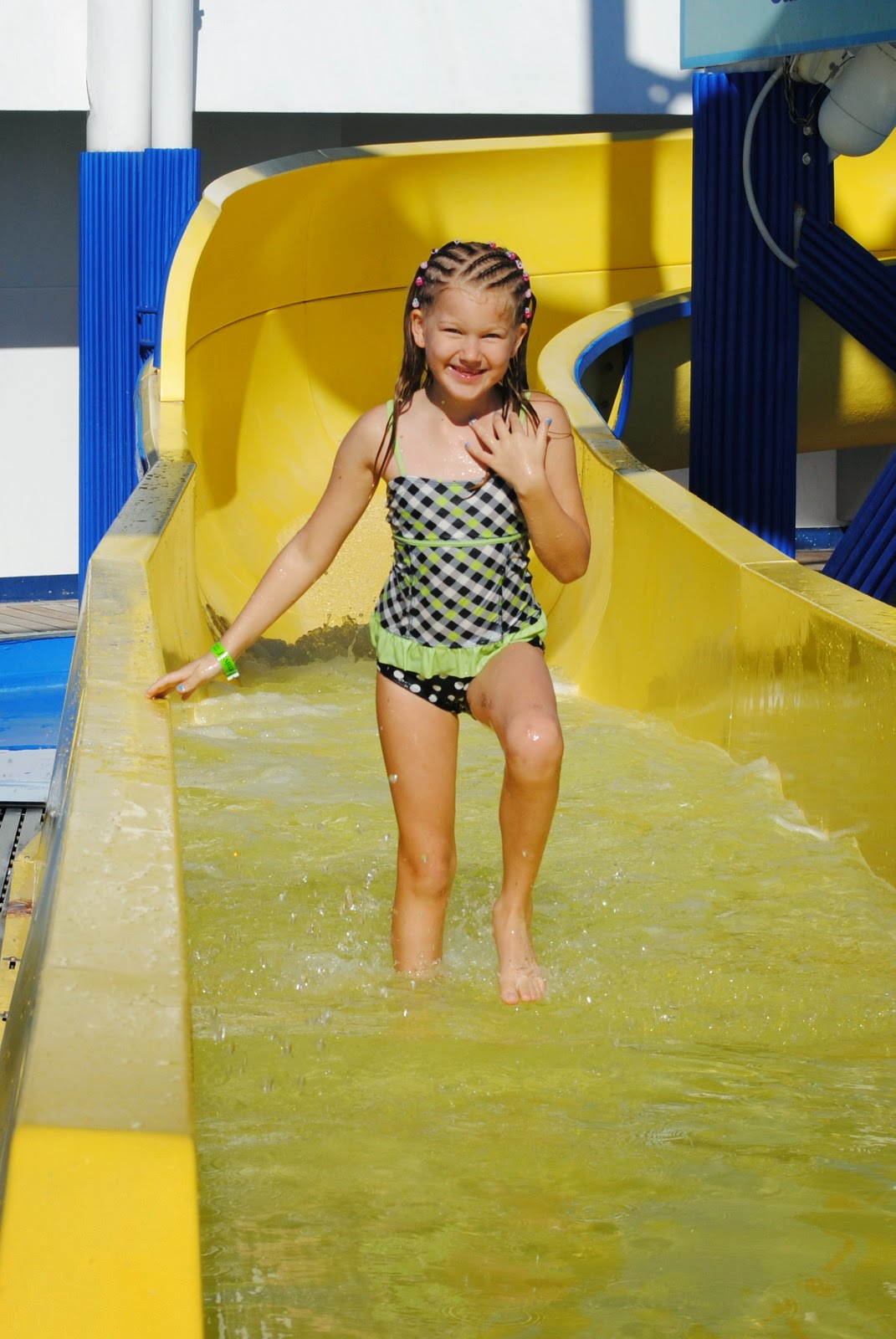 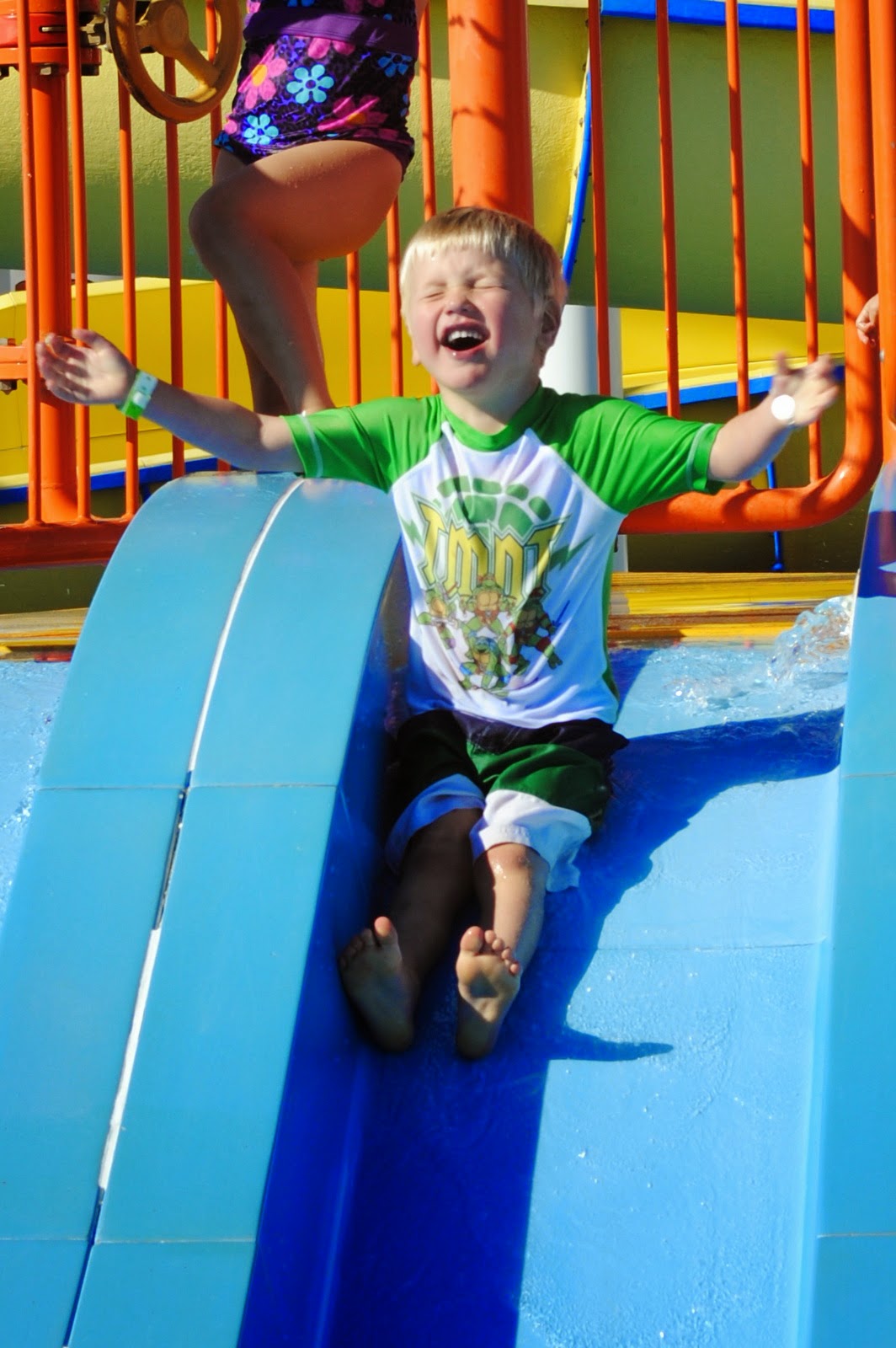 If there ever was a way to spend CHD Awareness Week, it was this. Doing something we never thought possible, made possible by the incredible advances in CHD treatments. A vacation where Bodie's heart was just an afterthought.

We were SO SO Blessed by this vacation.
Thank you, so much, Popo Alan and Grandma Jan, for making the vacation possible for us - and Missy, for being the brainchild behind the whole thing!