I didn't want to be right.
I really didn't.
But, as it turns out, symptoms of tummy bugs don't just mirror heart failure...sometimes they actually ARE heart failure.

We saw Bodie's cardiologist this morning and an echo confirmed my worries. His symptoms aren't being caused by a bug. They're being caused by a decrease in his heart function. For my heart mom friends, his apex isn't contracting like it should be. For my non heart mom friends, his heart isn't in the worst shape it could be, but it's definitely not where we need it to be to keep up with him.

We dealt with this in September, and chalked it up to post-op issues. We never expected to be dealing with it again 2 months later.

Bodie is such a complex little dude.
There are several theories for what is causing it.

It could be that his persistent EAT (the fast heart rate we tried to make go away by surgery this past summer) that is still hanging around has morphed into a different kind of rhythm that his body isn't sure how to handle.

It could be that the beta blocker we increased last month (to try to control his EAT) is depressing his heart function (beta blockers can absolutely do that, although Bodie has not had that reaction before).

Single ventricle kids can technically go into worsening heart failure at any time. It could be that.

All that we do know is that:
1. His body doesn't like EAT. Never has. Never will.
2. His heart function is currently depressed.
3. He's retaining some fluid and fatigues easily.
4. He's currently in EAT a lot.

Those 4 things are linked.
We just don't know quite how.
So, we go back to the drawing board to try to discuss the meds we're using to manage his EAT - the combinations and doses.
And, in the meantime, start him on diuretics to help with this decreased function. I gave him a couple of doses of diuretics over the weekend and already have started to see an improvement. His stamina has improved quite a bit.

And we hope and pray for answers. These are uncharted waters for us, and we're scared. And we were thrown into them so quickly. This has really all happened so fast, which is NOT typical for post-Fontanners. They tend to be stable with lots of warning when things start to decline.
Please pray for our sweet boy, for wisdom for his medical team, and for peace for all of us.

And finally, when you see Bodie, please don't talk to him about this change in his heart and what we're praying for, unless he brings it up. He does understand some of what is going on, but he also just wants to be a typical kid. From what I'm writing, you're probably expecting to see a kid lying in bed. But these CHD kids can be deceiving - they compensate so well. He definitely fatigues more easily now. And needs to take more breaks. But in between rests this weekend, he rode around in a golfcart and had a blast. 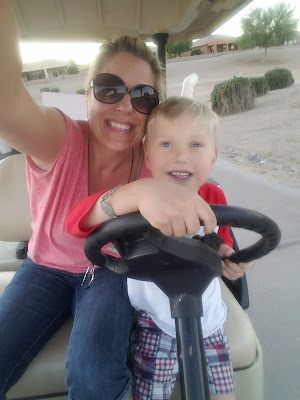 He's at school today. And he'll go to karate later today (he's got a belt test to prepare for, and we don't want to miss any classes leading up to that!). He's still living as normal a life as he possibly can. As worried as we are, we've tried to never make his heart the focus of his life, and we'd like to do that as long as we can.

Thank you so much for your continued support and prayers as we process this and sort through the options we have available to us to treat this and get Bodie back to his sweet, wild self.