Warning: this is about to get complicated.
Hold onto your hats, folks.

It's hard to put into words the kind of miraculous turnaround we have seen in Bodie this week. On Monday, he was blue, lethargic and winded. I was getting calls from his school about how concerned they were and we were in talks about cutting his school schedule back to half days until we got this heart failure thing under control. He couldn't even participate in recess because he simply didn't have the energy to do much more than sit. I was anticipating a hospital admission by week's end. I was SO scared.

But something changed, starting sometime mid-day Tuesday. By Tuesday afternoon, he was feeling so much better, and within another 24 hours or so, his symptoms were completely gone. Other than some remaining cyanosis (purple lips) in the mornings and slight puffiness in his eyes, by all accounts, he is 100% back to himself. He even felt well enough to go bowling tonight! 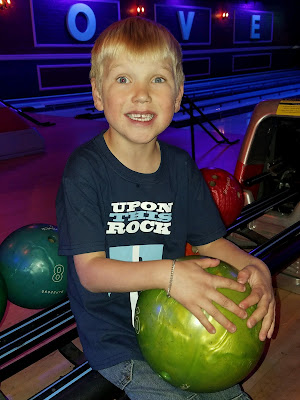 Honestly, we're all kind of stumped. Clearly, the power of prayer moved God's hand over our son this week, and for that, we are profoundly grateful. Please don't mistake our continued concern for lack of gratitude for what we witnessed this week.

But it is too soon to know whether we are out of the proverbial woods. We might be. Or the past few days may have just been a reprieve to prepare us for the news we will receive next week. We just don't know and are still in a state of concern. In any case, we are so incredibly grateful to have our spunky, vivacious boy back.

We don't know much at this point. What we know is that
(1) he had depressed heart function on his last echo;
(2) he was displaying classic heart failure symptoms at the time;
(3) those symptoms also are classic stomach bug symptoms; and
(4) his symptoms disappeared very shortly after starting the diuretics and before making any other med changes.
That is literally all that we know.

There is so much we don't know.
1. Was he in heart failure before this week and we just didn't know it? Did the bug (or, more likely, 2 bugs - a tummy bug and a cold of some sort, as he does have some mild respiratory symptoms as well) just push him over the edge? If this is the case, then we are incredibly grateful for the viruses, as they alerted us to something we would not have known was happening. Now we can aggressively treat it.
OR...
did the catching of the 2 bugs just wreak enough havoc on his body to cause depressed heart function? Not likely but not unheard of.

2. Did he have more EAT (fast heartrate) lately because he was in heart failure?
OR...
did the increased EAT itself cause the heart failure?

4. Did the diuretics provide enough relief to keep the heart failure at bay? Seems unlikely since his symptoms started to abate before the diuretics could really have done much.

As you can see, we have a lot of theories, but no concrete idea whatsoever of what is actually going on. Outwardly, he appears much much better. But with cardiac kids, the outside doesn't always match the inside. His heart failure may be every bit as bad, if not worse, than it was on Monday when we saw his cardiologist. We don't think so, and we hope that's not the case, but he truly have no idea. So I would say we're being "cautiously optimistic" but I honestly don't even think we have enough information to be optimistic at this point.

We will know more after we do a repeat echo next Tuesday. That should give us a good idea of where we stand and what path to take going forward. In the meantime, please keep the prayers coming for our sweet boy. His recovery this week has been nothing short of miraculous. Your prayers are clearly being heard. Please keep them coming.