We had Bodie's follow-up echo and cardiology appointment today. We did not see the significant improvement on the echo that we were hoping for. We did see a tiny improvement, which we are grateful for. AT LEAST IT DID NOT GET WORSE! We did a bunch of labs (including measuring his BNP, a heart failure marker, and CRP, a cardiac inflammation marker). We will also be getting referred to the heart failure team at CHLA.

This is very serious, and has the potential to completely upend our lives. It is scary and we covet your prayers over Bodie.

This was not what we are hoping to hear, but even so, there is much to be thankful for, and that is what we're choosing to focus on this Thanksgiving week.

Bodie's significant lethargy and nausea have all but abated, and seem to have been caused by a combination of bugs and not heart failure. Bodie feels fantastic, and for that we are grateful.

Bodie's heart failure symptoms are so mild (slightly lower oxygen saturations, purplish tint to his lips and occasional puffiness around his eyes). Heart failure symptoms can be so much worse, but they are not - he is living a full and abundant life, and for that we are grateful.

He likely has had this degree of heart failure for some time, and we had no idea. Had he not had a combination of nasty bugs that pushed him over the edge, we might not have even known. And it's pretty darn hard to treat something you don't realize needs to be treated. The illnesses brought his heart function decrease to our attention, and for that we are grateful.

One of the theories being floated around is that his anti arrhythmic med, Flecanide, may be causing his heart failure. Because of that, we cut his dose in half last Wednesday. We were worried that his heartrate might skyrocket, or that his EAT would increase. That did not happen. In fact, his EAT seems to have lessened. We have learned a valuable lesson from this wean - his body can get the same benefit from a smaller dose of Flecanide. Bodie can safely get by with a lower dose on a medication known to have very huge very scary potential side effects, and for that we are grateful.

His heart failure is not affecting his entire heart. For the most part, his function is fantastic, other than the apex, which simply isn't moving the way it should be. We don't know what this means. But we do know that we are not dealing with a global decline in function, and for that we are grateful.

His cardiologist does NOT believe (and neither do we) that we are anywhere near heart transplant discussions. However, she thinks he has gotten complicated enough with enough moving parts that we need some fresh eyes, and maybe some medication adjustments to help him out. So she is recommending we see the heart failure team to see what their thoughts are. We have two top notch heart facilities close by with excellent heart failure teams, and for that we are grateful. And we have a doctor who understands when we need some more help, and for that we are profoundly grateful, and do not take for granted.

We have a Father who answers prayer, who knew all of this was coming, and is holding us all in His hands, and for that we are grateful.

Big picture: our son is here, full of joy, vibrancy and love (with a side of piss and vinegar).
How could we be anything but grateful??? 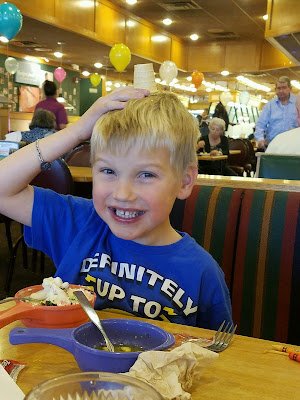