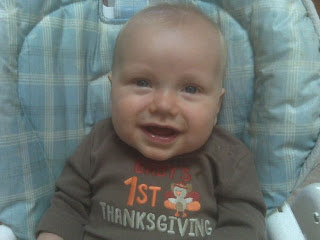 Yesterday marked a BIG day for little Bodie. Not only was it his 9 month birthday, but it marked the day he had officially spent more time at HOME than in the HOSPITAL! Yep, that's right. Of the 273 days he has spent outside of my womb, as of yesterday, he had spent 136 of them at the hospital and 137 of them at home!!! PRAISE GOD! Wow...what a testament to the ridiculously rough start our sweet boy had in this life, right? And what a testament to the amazing healing power of God that, other than the 5 days for his bi-directional Glenn surgery, he hasn't spent any time in the hospital since his discharge in July!

So why am I updating today, instead of yesterday? Oh, I'm so glad you asked. Apparently, I talked too much about how excited I was that Bodie had hit the mark of spending more time at home than in the hospital and Bodie got wind of it and decided he needed to make sure he liked home better, because he earned himself a trip to the ER last night. That's right - in honor of our big accomplishment, we went back to the hospital. :-(

He has had a cough for the past couple of weeks, but because he's been satting fine and otherwise acting fine (other than occassional bouts of fussiness or not wanting to eat), we'd just been watching it. Then, Monday night, he came down with a low-grade fever, started getting ridiculously fussy and his sats started going bonkers - truly, all over the place. Uh oh. Then, he woke up and whimpered for 2 hours straight Monday night. Double uh oh. Off to the pediatrician's office we went. She took one look at the poor kid, who by then looked miserable and was having labored breathing, and immediately ordered a chest x-ray and a breathing treatment. The x-ray looked hazy and the treatment didn't seem to have much effect on his chest retractions, so she sent us to the CHLA ER. Dusk, who happened to be in the area, swung by and picked Sierra up while I headed to the ER with Bodie.

Honestly, I knew he was likely going to be admitted and was having a really hard time holding myself together. I knew intellectually it was the best thing for him - to get him checked out and treated, particularly if it was pneumonia. But emotionally, it was all I could do not to run back home with Bodie and Sierra and pretend nothing was wrong. I couldn't handle the thought of iv's and blood draws yet again for our sweet boy. You'd think each hospital visit would get easier, that you'd get jaded, but surprisingly, it doesn't get any easier. Sure the actual hospital stay does, once the reality sinks in and you're back there. But the shock of finding out we have to go back there hits me like a ton of bricks every time. Talk about some serious PTSD. For mama. Bodie? Did fine, like always. Was all smiles by the time we got to CHLA. Charmed the pants off everyone there. Had several docs tell me more than once that he was the cutest kid they'd ever seen (something about his great big goofy smile, I think). Actually literally squealed at the x-ray tech when we got in the room for the chest x-ray (yes, mama didn't bother to bring the chest x-ray from his pediatrician, so poor guy got 2 chest x-rays done within hours - oops). Not sure why he made the abrupt turnaround - we're thinking it was either the threat of a hospitalization or the breathing treatment. My money's on the breathing treatment.

In any case, his chest x-ray was indeed hazy, but apparently his baseline is hazy due to his pulmonary hypertension, so it was essentially unchanged from his x-ray post-op from his Glenn, so they weren't concerned. They also ran a vbg (blood gas) and everything came back perfect. Praise God! He was satting great the entire time we were there and showed no signs of labored breathing. I think the ER docs were probably inclined to keep him for observation (it's my experience that even the most experienced docs get a little concerned about a single ventricle kid with pulmonary hypertension, particularly if said kid is suffering from a respiratory infection of some sort). But they left the decision up to our cardiologist. I know we've mentioned before how much we LOVE Bodie's cardiologist, Dr. Nancy Kim. Well, we love her even more now (didn't even know it was possible to love her more than we already did!). The ER doc called her and since he wasn't showing any clinical symptoms of pneumonia, and she knew we would monitor him closely at home, she was fine sending us home! So, miracle of miracles, we got discharged from the ER last night!!! (Seriously, we were shocked - we had prepared for a stay. In fact, Dusk had gone home, packed me a bag and walked into the ER to deliver my bag literally as the doctor was telling us we could go home. Poor guy got stuck driving all the way up to CHLA for nothing - ah well, we'll take the good news!)

So, to make a long story, well, long (sorry!), we all ended up back under the same roof last night, with a good dose of antibiotics. We also added an inhaler to the mix this morning. And some combination of antibiotics and breathing treatments seem to be working for him, because he's now satting back in his baseline low to mid 80's and is happier than I've seen him in days. PRAISE GOD!!! I know we had A LOT of you praying and we know that's the only reason last night turned out the way it did. So THANK YOU!
(Oh, and in other good news, Bodie continues to climb the growth charts. At nine months, he's now 17lb6oz and 28in, for 7% weight and 49% length. Go Bodie!!!)
I guess Bodie decided home was better than the hospital after all. I could've told him that. Turkey. So, for today, we continue to have evened the score, with home now eeking out ahead by 2 days. Hoping and praying home wins by a landslide. :-)
Posted by Amy Bennett at 8:52 PM