Big day for the Bennetts

Bodie had a BIG day yesterday. In addition to celebrating his first Halloween, he took a huge step forward in his eating. Although Bodie has been doing great with his thickened bottles and all types and consistencies of baby food, we had really been struggling with the "finger food." He loves to eat and always wants to put whatever we're eating into his mouth. I've tried on several occassions to give him really small bites of bread or cereal and each time, he puts it in his mouth with a huge grin and "chews" it (mostly just gums it and pushes it around). But when it comes time to swallow, he gags and throws up every single time. Yes, it's gross, but honestly, he's just a thrower upper, so that part doesn't bother me that much - we're just sorta used to it. But what bothered me was that we didn't know WHY he was doing that. I didn't think it was a sensory issue, since he didn't have any aversions to chewing the food or having it in his mouth in general. Another heart mom suggested that maybe it was an overactive gag reflex due to the number of times he's been intubated. I think that's probably a very good possible explanation.

Anyway, up until yesterday, the only thing I could get him to eat without throwing up was Puffs. But I keep trying anyway, figuring eventually we'll get there. Well, yesterday, I decided to bite the bullet and try again with Cheerios. I braced for the worst. BUT he did it!!! He ate 15 cheerios in a row without so much as a gag! I was thrilled!!! He did the same thing again today, so I know it wasn't just a fluke!

It's really a huge milestone for us because it gives us such hope that eventually we can get past whatever it is that's causing this and eventually he'll eat regular food. It's so true when they say that, with these heart kiddos, you really don't take anything for granted.

And in other big Bodie news, he started waving today!!! It's a very short wave, but it's definitely a wave and it's so cute!

Please keep Bodie in your prayers on Wednesday, as he's having a repeat swallow study. They scoped him at his ENT appointment a week ago Friday, and it showed "minimal" left vocal cord movement. Bummer. :-( We don't know if there has actually been any improvement, since "minimal" is pretty subjective and depends on who is scoping him. His first scope was done by a different team at CHLA - oh, and we can't actually get our hands on that original scope, so we don't know what it said. So, the ENT decided just to order another swallow study to see what we'd find out. There's a big part of me that's scared to death that he's silently aspirating and we just don't know it. I know logically that's not happening since he's been eating for 8 months now with no signs of aspiration (if he was aspirating, it would be 100% clear by low sats corresponding to feeds, which he just doesn't have), but I think I was just so traumatized by his first swallow study) that this week's study has me pretty spooked. Please pray for good results on Wednesday's swallow study. Thanks! :-)

Oh, and because it wouldn't be a Bodie update without a picture, here's one of Bodie last night. We went trick or treating with Sierra's BFF Sofia and her mom Val and dad Rik. Bodie didn't last too long before he was annoyed and wanted OUT of the sling. So, Dusk took him home and they handed out candy to trick or treaters while we finished up. When I got home, this is what I found - bunny rabbit in an exersaucer by the front door. Too freaking cute. 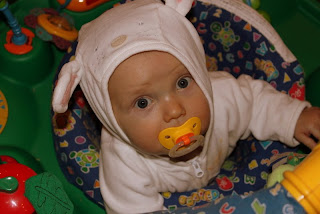