Well, as it turns out, this one does...a lot, actually. But at least he looks like a big boy in his new big boy carseat! 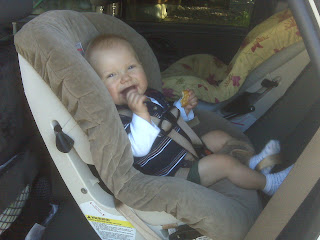 Can you believe how big this kid is getting? Dusk says he's growing like a weed. My response? "yeah, like a fat weed." He has gained a pound in the last 10 days - he's now 19 pounds! It's awesome! I'm blaming it on the Ritz crackers, which he has just discovered in the last week. They do a remarkable job of shutting him up appeasing him when he's not so happy. ;-)

(He outgrew his carseat in length at the same time Sierra outgrew her carseat in weight, so he got her old carseat and she got a nice new(er) one. Such is the life of the 2nd born, I'm afraid. :-) )