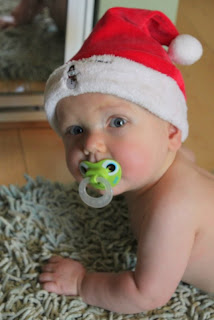 Wow, what a week for Mr. Bodie Man.
You may remember in my last post that we thought he had the flu since he had been inconsolable for about 24 hours. He also had a runny rose. It was odd since his symptoms were so different than the rest of ours (i.e. his food didn't seem to have the same desire to immediately exit his system through any means possible), but we didn't know what else to chalk it up to. Well, yesterday I looked into his little mouth. And what did I find there? Tooth #3 breaking right through the gumline! He got his first 2 teeth (the bottom teeth) within 5 days of each other 5 months ago and then nothing since! Since I'm never out of things to worry about, I actually asked his pediatrician if the lack of teeth since was a developmental thing. She assured me that no, it was not and that tooth development is not an indicator of future intelligence. Thank God. Nonetheless, I was thrilled to see another tooth. His upper left fang (ok, I know that's not the official term - I want to say it's incisor maybe - or something like that - but whatever, you knew which tooth I was referring to when I used the term "fang" right?). And not just the point was coming through, the whole dang bottom of the tooth. Poor kid.
Then today, I look again and oh wait, his upper right fang is also joining the party. Oh, and the tooth immediately to the left of his left fang. Holy crap. Seriously. Now I know why the kid was inconsolable for 24 hours straight. The best part is the smile this is going to give him - his 2 bottom front teeth and his 2 top fangs with another tooth behind. This is gonna get interesting. Let's hope the rest come in quickly. :-) The good news is that, now that they've broken the gumline, he's much more pleasant to be around.
Then, because he wanted this to be a really memorable week, he decided to hit another big milestone, a language one! Bodie has been squealing and cooing for months, but hasn't made any consonant sounds or babbling yet. We know he's behind - I want to say that's a milestone at 6 months, maybe even earlier. His pediatrician noticed it. Each PT who has evaluated him has noticed it. In fact, at his 8 month assessment, he measured at around 4 months for verbal communication, in large part because of that. We know he's behind - we don't know whether it's a boy thing (boys tend to talk later than girls), a vocal cord issue, an I-spent-way-too-much-time-in-the-hospital thing, something more serious or really nothing at all. But we know he'll need therapy of some sort to catch him up there. The thing is that they don't do speech therapy until kids are closer to 18 months or so. So there's nothing we can do now, other than just talk to him a lot (which we already do) and encourage him to talk back (which we also do). It's been heavy on my heart, only because communication issues are real concerns with kids and I don't want things to be any harder for Bodie than they have to be.
Well, tonight, apparently Bodie had had quite enough of Dusk saying "DAAAADAAAA" over and over again in his face, because he responded back with "DA DA DA DA"! (I think this was also how Dusk got Sierra to say dada as her first word, come to think of it.) We were shocked! He kept doing it and then it was like a floodgate had opened, because dinner was filled with Da's and Yeah's and Wah's and general babbling. WOW. What a huge blessing and what a relief. He's so excited to be making all this noise, and we're so excited for him! What a big week for Bodie!
And the week is not over. Tomorrow we are off to his pediatrician's office for his first Synergis shot. In a nutshell, Synergis shots lessen the effects of RSV, a nasty respiratory infection that can cause long-term lung damage in healthy kids. It can really wreak havoc on kids with other already compromised systems, such as cardiac kids. So cardiac kids, kids with lung issues and preemies tend to need to get Synergis shots for at least their first year of life (Bodie will need them for at least this flu season and next; not sure about after that). He will get them every 28-30 days from November-February. Unfortunately, they don't prevent RSV, but they will help him considerably should he contract it. Anyway, it's a big fatty injection and sooooooo expensive. So it's a huge hassle getting the insurance company to approve it the first time around. Bodie's pediatrician's office has been going back and forth with the insurance company and the pharmacy, but they finally got everything squared away and he's going in for his first shot tomorrow. The nice thing about his pediatrician's office is that they do Synergis shots on Saturday, because they don't like asking medically fragile kids (which anyone getting a Synergis shot probably is by definition) to come into the office the same time as other patients and risk catching something from another kid in the waiting room. Not looking forward to it, but it's a part of life for a cardiac kid, and I am looking forward to the benefits of him having the shot. Please pray that he tolerates the shot well!
Thanks and God Bless!
Posted by Amy Bennett at 8:33 PM