Oh. My. Gosh. What a week. As Dusk so eloquently put it "man, Bodie does not do miserable well." To be fair, I don't think any of us do, but seriously, this kid takes it to the extreme. Not sure which parent he gets that from - I have my theories, but I'd really like to sleep in my own bed and not on the couch tonight, so I'll keep quiet. :-)

Anyway, Bodie has been a crankster and not really wanting to eat for about a week now. (He still eats his solids and noshes on crackers like they're the last ones on earth, but hasn't been interested in his bottles.) We initially chalked it up to teething, since it looked like he has a few about to pop through. Then, on Wednesday, he really stepped up the crankiness and a runny nose started. Still teething? Possibly. But seriously, if that's what it is this kid has a ridiculously low tolerance for pain - he was so cranky on Wednesday and Thursday you would have thought someone was tearing him apart limb from limb. Soooooo frustrating. And he's really producing a lot of mucous, so we're thinking it's probably a cold.

Then, this morning, even though he started perking up (i.e. he let me set him down for more than 5 seconds), his sats took a pretty big dive. Although that tends to be his pattern (he'll be symptomatic but with good sats for a few days, and then he'll be over the hump symptom-wise and his sats will drop), we were concerned enough to call his cardiologist. We were scheduled for his monthly appointment Monday anyway, so she just bumped us up to today.

So Bodie got his full cardiac workup today - length and weight check, ekg and echo. Great news all the way around!!! As far as his current symptoms, although he was wheezing in the office, his sats were fine and he sounded clear. She just told us to keep up with the breathing treatments (yep, Bodie was thrilled with that one - again, this kid is soooooo overly dramatic when he doesn't like something). His length (28.5in) and weight (18lb10oz) were both great - he had jumped to 10% on the growth chart!!! (And, if he hadn't been refusing his bottle for the past week, he would have been at 19 pounds (which is what he weighed last Monday) and would have been at 25% on the growth chart! I'm so proud of our little guy for moving UP the growth chart - at this stage in the game, that's a huge deal!)

His EKG looked great and, in the words of his cardiologist, "his function looks even better than last time!" FANTASTIC!!! So, the best news of all (besides the fact that we didn't get sent to the ER, of course) is that we're going down on meds (always music to a heart mama's ears)!!! Since his function is great, we're dropping the Digoxin. And since he's on a baby dose of Propanalol and we're not convinced he needs that, we're dropping that as well! So, he's now down to only 3 meds - Aspirin (1/2 baby aspirin once a day), Enalapril (2x/day) and Sildenafil (3x/day)! And because I combine the Enalapril and Sildenafil into the same syringe (and throw Aspirin in as well), he only has 3 syringes a day now!!! That is sooooooooooo far from where we were post-Norwood, when I want to say he was on maybe 15 syringes a day. Crazy times, I tell ya!

I also got an idea of the timing of Bodie's Fontan. I asked his cardiologist when we would start thinking about it. (I blame my fellow heart moms, by the way, for making me go down that road - one asked her cardiologist recently and it got me thinking.) Anyway, apparently, there's a difference of opinion on timing for the Fontan. CHOP (really the leader in the area of hypoplasts) is doing a standard of 18-24 months. Stanford, on the other hand, prefers to wait until 4-6 years old. And CHLA falls somewhere in the middle, at 2-3 years. (Although CHOP is definitely #1, both Stanford and CHLA are top 10 centers as well.) So why the difference of opinion? (Keep in mind when reading this next section that I am NOT a medical expert - this is just what I took away from my conversation with Dr. Kim. This is an area of a lot of debate right now.) Dr. Kim said the phrase she's always heard to describe it is the difference between Blue Motorcyles and Pink Bicycles. Glenn kids are like Blue Motorcycles - they're not satting that high (hence, they're "blue"), but they have tons of energy and can generally keep up and do what they need to do. Fontan kids, on the other hand, are saturating near 100% (hence, they're "pink"), but they tend to have exercise limitations and generally move a bit slower. So, the biggest argument for an earlier Fontan is to get kids to optimal saturations as soon as possible - a lot of studies have shown that development delays may be caused by being at suboptimal saturation levels for so long. The argument on the other side is that another 2 or 3 years won't make that big of a difference and it's best to leave the kids with Glenn phsyiology as long as possible, provided their sats allow for this. Dr. Kim prefers to follow Stanford's guidelines, so, provided Bodie's sats allow for it, we'll probably be looking at a later Fontan, closer to 3 or 4 years old. But, things can always change and every hypoplast truly charts their own course, so you never know. But it's nice to know right now at least that another surgery should be further off in the future. Praise the Lord for that!

So, all in all, it's been an emotional week to say the least. The good news (besides today's fabulous cardiology appointment) is that Bodie seems to be doing better now and getting past whatever was bothering him - cold or teething. As you can see from the below picture, he's not the only one exhausted from the emotional turmoil each cardiology appointment brings upon us. After our appointment, he slept the entire way home, slept through me stopping the car, picking up Sierra and getting her back into the car, and getting home, getting Sierra out of the car, and taking pics of him sound asleep. I took him inside, he took a bottle and then went back to sleep for a bit. Silly boy... 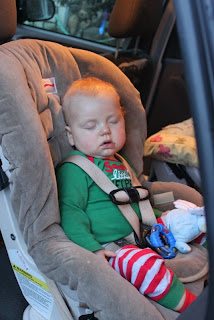 Ok, so it's possible that I'm projecting and he's sleeping from exhaustion from having been miserable for a week and just having had an invasive doctor's appointment, but I'm going with he's emotionally exhausted. That way, I'm not the only one. :-)