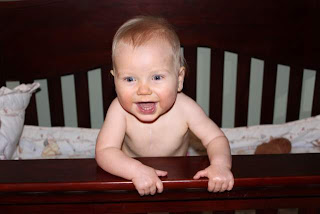 So I know my last few posts have been really heavy, so I was planning on doing a post tonight called "Levity" with funny stories about what the kids have been up to lately. One of the funny things that's been going on is Bodie's ridiculous desire to try to pull into a stand. on. everything. But he can't quite do it yet (still needs just a little push up from mama) and it's really funny because he tries so hard. Guess the joke's on me, because this is what he did tonight: 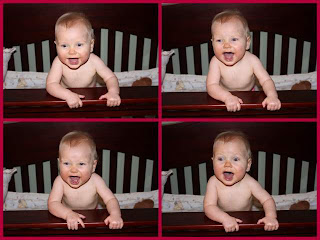 SO proud of himself. I thought it might be a fluke (and I could hold off dropping the crib mattress until tomorrow)...until he did it again 2 minutes later. So, instead of getting the kids to bed early tonight and relaxing, I got to tear the crib apart and drop the crib mattress. Of course, Dusk was working late (would I expect any less of Bodie, but to pull to a stand in his crib on a night Dusk is working late?), and any parent whose ever had to drop a crib mattress before will tell you that it is NOT a one-man job (especially with a crying infant crawling on top of you), so I called in reinforcements in the form of the amazing Lucy Rodgers to help me out. Thank you Lucy!!! We got the job done and Bodie was sleeping soundly in his newly lowered crib shortly thereafter. Exciting times, I tell you!

In all seriousness, I was really surprised and excited to see how fast Bodie figured out how to pull up on stuff. He just started trying last Sunday, so in less than a week, he completely figured it out and can now do it all on his own! He also started cruising this week! His therapists keep commenting on how smart he is and how quickly he catches on to things (their games, different positions, etc.) and we're definitely seeing that. One of the concerns that always sits at the back of my mind is whether Bodie will suffer developmentally from everything that has happened (cognitive issues are not uncommon with heart kids, due to the reduced oxygenation and time spent on bypass), so it was hugely comforting to hear them say things like that! Couldn't possibly be prouder of our little guy.

Now, for the levity part...

We've been laughing around here a lot lately, partly because of Bodie's silly antics, but also from Sierra. She is such a character, full of energy and love. Today, she came down the hall dressed in this, saying "bye mama. Bye Bodie. We're going to the park" 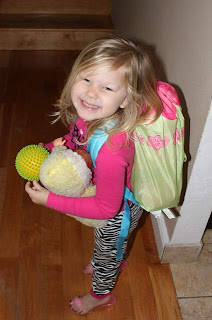 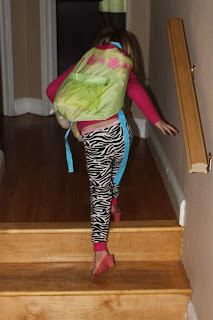 (By "we," I assume she meant her and dolly. Not sure if you can clearly see her get-up here, but included zebra pants, high heeled princess dress up shoes and her backpack - so funny)
Shortly thereafter, I told her to go to her room and get dressed. I went back to find her in her room, in her bathing suit, princess tiara and princess dress up shoes, posing in front of the mirror and saying "Hello there Miss Fabulous" What the what? I seriously could not stop laughing. As an aside, she probably doesn't have a half bad idea of how to start the day. Maybe my days would go a bit better if I started them with such self-affirmation. :-)
As for Bodie, this kid is crazy. He does everything to the max - laughing, crying, eating (or not eating, depending on the day), pulling things, throwing things, you name it. He's started self-feeding and is having SO MUCH fun. Turns out, he loves avocado (I'm pretty sure he thinks guac is a food group!)... 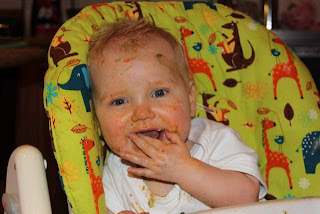 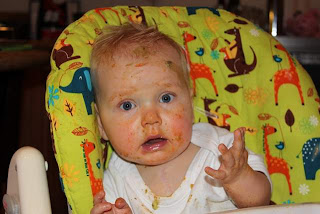 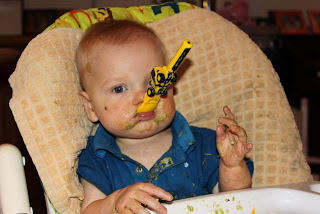 He has discovered my tupperware drawers, and loves to sit there and just pull everything out and hurl it across the kitchen. Case in point, tonight, he got into the cabinet with Sierra's plates and threw them everywhere. He was so proud of himself: 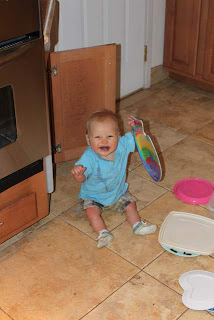 And, of course, he just had to pull up on the (completely unstable) shelf in the cabinet 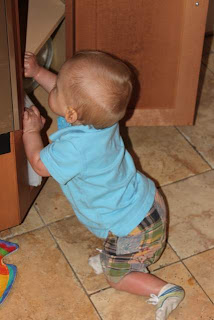 So, we're laughing a lot around here these days and trying like mad to keep up with 2 crazy kids. :-)
Posted by Amy Bennett at 9:38 PM