For the love of milestones

As a mom, you're repeatedly told not to compare your child to others. Everyone tells you this - your child's pediatrician, your husband, your best friend (whose child has hit EVERY milestone months early, as it happens), the stranger behind you in line at the grocery store. They tell you "every child develops at his or her own pace." The thing is, no one ever gives you that speech unless your child in fact appears to be behind. It's only after looking at your child and discovering that he or she should have been doing (insert milestone here)
In any case, the directive not to compare your child to others is generally completely ignored by most parents. But I tell you, if you have a special needs child, you strictly follow that guideline. I'm not sure why. Perhaps it's because your child has struggled with so many MAJOR issues that when he will meet milestones is the least of your concerns. Perhaps it's because you're tired of focusing on how your child is different than his peers and a milestone discussion reminds you of all the ways your child is different and for once you'd like to focus on what makes your child the same as everyone else. Perhaps it's simply because, as a special needs parent, you have enough bad news that permeates your world, you don't want to throw on any more.
So you throw the milestone chart out the window. And you watch your child. He develops at HIS pace. He meets his milestones on HIS time. And you rejoice when he meets every.single.one. Doesn't matter if it's early, right on time, or ridiculously late. In fact, the ridiculously late ones are perhaps the most celebrated of them all.
So I haven't really bothered to compare Bodie to his peers. I mean, how many of them have spent 4 1/2 of their first 5 months lying in a hospital bed, fighting for their life? How many of them have had their chest cut open and their heart stopped 3 times? How many of them were not allowed to eat for days at a time due to surgeries and procedures? So you see, trying to compare my son to other normal babies doesn't even make sense. Sometimes, if I really feel like I need to have a milestone discussion, I look at his time in the hospital like many look at the time between when a preemie was born and when he or she should have been born and adjust accordingly. I take the time spent in the hospital off of his life, to get an adjusted age approximately 4 1/2 months younger than he actually is. So right now, at almost 13 months old, he should be developmentally where a 9 1/2 month old is. Anything further along than that and he's a total rockstar and ahead of schedule! How do you like them milestones? (Yeah, I'm pretty sure I'm not allowed to do that - that's my other dirty little secret - but shhh, don't tell Bodie's therapists that - I'm pretty sure they're not working off my special "Bodie" milestone chart.)
Anyway, this is all to say I don't really pay much attention to milestones. I ask Bodie's therapists when I feel an undying urge to know where he's at developmentally, but other than that, I just watch Bodie and rejoice in the incredible progress we've seen in the last few months! (In fact, his progress in the past month or so has been really awesome to watch - his therapist told me last week that, were it not for his history and the fact that he was already getting services, if they were doing an initial assessment today based on what he's doing now, he is so caught up that he wouldn't even qualify for services!) With that said, this kid has had a BIG week. In addition to crawling everywhere these days...
(yes, that is out our front door - I did say everywhere, right?) 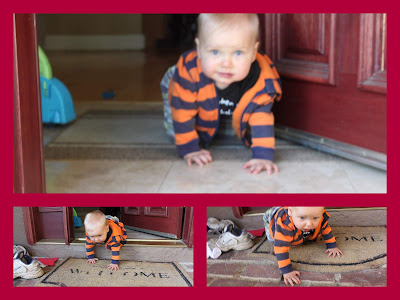 and pulling up on everything...
(the slide at the park) 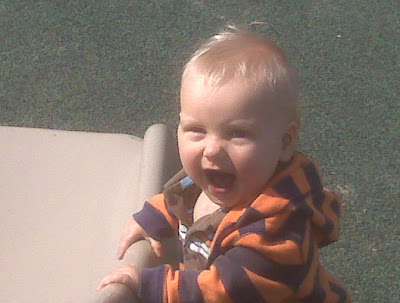 This week, he started saying bye!!! (it's usually accompanied by a cute little wave, but he was a little preoccupied with Daddy's shoes, and his shoe obsession (Bodie's, not Daddy's) is for another post...) - oh, and this is a video, so click it to play :-)