All Systems are Go 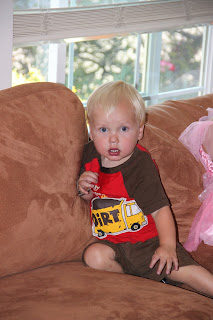 Much to Bodie's chagrin, he had his pre-op appointment with his pediatrician's office yesterday and everything checked out aok for Thursday's ear tube surgery. Looks like we're all set. The doc said Bodie looked incredible (the doc (not our usual doc) actually said as he signed into the computer system "whoa - this screen gives me an immediate complete medical history of Bodie, including infections back in summer of 2010. But it doesn't say he looks totally normal now. The anesthesiologist on Thursday is going to see this before he sees Bodie and be completely scared of what he's going to find!") Ha! We're used to the shock on doctors' and therapists' faces when they look at Bodie's record before meeting him. Nobody expects him to be as robust as he is after reading his file!

In fact, he was in usual Bodie form (aptly described by a doctor last week as "a tornado with legs"), opening up the door to our exam room and marching up and down the hallway (in nothing but his diaper, of course - thank goodness I cloth diaper, so at least he looked cute!), chanting "toy! toy! toy!" as he peeked into each open exam room to see if they had better toys than us. By the end of our hour wait for the doctor, he had pilfered every available toy and brought it back to our room! Meh, I figure it's what they get for not having more toys! Everyone was laughing at him.

The only other thing of note was that apparently he had A LOT of fluid in his ears. Yep, it's a good thing we're doing the tubes! Here's hoping and praying the fluid doesn't turn into an ear infection in the next 2 days! (The doc didn't see any inflammation, but anything is possible, so please join us in praying for NO infection between now and Thursday!) We're set for sometime Thursday morning - they're supposed to call Wednesday night to give us a check-in time.

And, just to keep our week interesting, we threw in a dentist appointment today. It kinda started like this... 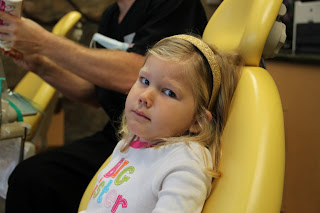 (Seriously, HOW did I get the worst doctor's appointment kids ever??? I mean, Bodie I get, because of everything he's been through, but Sierra's no angel with doctor's appointments where shots are involved - or dental appointments - this one started out by crying and saying "no, no, no - I don't want my teeth cleaned!!!" - and this is a kid who has been going to the dentist since 18 months or so.)

Luckily, we got Sierra calmed down enough the hygenist was able to get in, clean and floss them and confirm that all looked good with NO cavities! YAY! 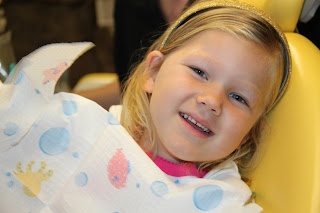 Unfortunately, since I had to sit on the chair with Sierra to keep her from hyperventilating, Bodie was free to roam the office (it's a huge pediatric dental office with open doorways, so lots of space for him to roam and charm the pants off nurses and dental hygenists). After the first few times of running and grabbing him, I just had to let it go and figure that, if no one was bringing him back to me speaking in a stern voice, he was probably doing just fine. He was. :-) I finally pinned him down long enough for the dentist to look at his teeth and determine that they looked great as well. As you can see, he was SUPER excited about the whole experience: 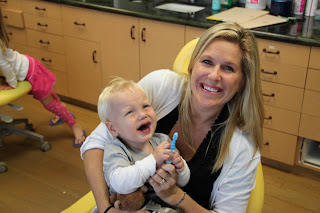 Ha! Never a dull moment at the Bennett's!