Hey, what do you know? It sounds way more exciting when put to a children's song. But alas, I am not referring to plans to meander lazily down some river in a comfy inner tube, but instead am referring to the tiny plastic tubes to be placed in Bodie's ears later this month. Yes, Mr. "I have a crazy big vocabulary for a boy my age, but still can't pass a hearing test to save my life" has run out of chances and is scheduled to have tubes put in Sept. 22nd. He hasn't really had too many ear infections and doesn't have any vocabulary delays (the 2 single biggest reasons for tubes), but he has persistent fluid build-up and every single hearing test they've done in the past year has shown hearing loss (both the ones that require cooperation (like there's any surprise he'd fail those, right? This is Bodie, after all) and the ones that don't (just measuring sound waves through the ear canal)). So, his ENT has decided the long-term risk of persistent fluid build-up just isn't worth it and we've scheduled Bodie for tubes.

This is how Bodie feels about his upcoming surgery... 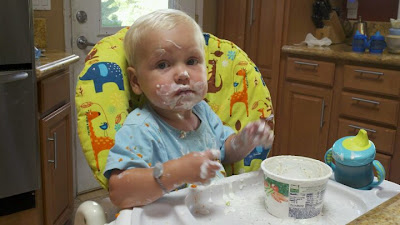 (or, it could be he's just pissed that I told him he couldn't have any more ranch dressing...who knows with this kid.)

I know tubes aren't that big a deal - I mean, I had 4 sets of temporary tubes, a set of "permanent" tubes, a tonsillectomy and adenoidectomy (and that was all before the age of 5!) for, say it with me now - "persistent fluid build-up and hearing loss." It seems that Bodie has inherited most of the worst of Dusk and my genetic traits - we were kinda hoping he'd catch a break on this one. No such luck. So, he's scheduled for pre-op testing with his pediatrician (less scary than it sounds - basically, just a physical) on Monday, the 19th and surgery for Thursday, the 22nd. And, just because it's going to be a fun week already, I decided to throw in a dental appointment for both kids on Tuesday, the 20th. Never a dull moment around here!

We had originally planned on getting the most bang for our buck by doing a sedated echo and "bubble study" (can help to determine if maybe it is collaterals, rather than pulmonary hypertension, causing his variable sats) while he was coming out of the anesthesia. Well, as it turns out, they do their tubes SUPER quick at Cedars (we're talking he'll be under for less than 5 minutes), so the only way to do the sedated echo and bubble study would be add additional sedation. Given that his sats are variable, but still generally within what's expected with Glenn physiology (75-85%) and really consistently too high in that range for him to have collaterals (if it was collaterals, you wouldn't really expect him to be getting consistently into the low to mid 80's), his cardiologist decided the additional sedation wasn't worth the risk. Although Bodie is a "difficult" patient when it comes to all medical procedures, including echos, she's been able to see enough of what she needs to see to know that his heart is functioning well and there aren't any major problems. So, since she didn't expect to find collaterals via a bubble study and a sedated echo would have been nice to get really clear pictures but really not "necessary" right now, we've opted not to do it at this time. I gotta say, I like how conservative she is when it comes to sedating our little guy. Just one of the many reasons we love Dr. Kim. :-)

So, we're all set for tubes. He's currently finishing up antibiotics for his second ear infection in less than a month (looks like the fluid build-up is starting to catch up with him, so the tubes are coming none too soon) - please pray that he stays infection free so we can get the tubes in and the kid can pass a hearing test! (As an aside, the kid kinda won't shut up right now - and apparently he can only hear about 35% of what we're saying - we're all a little concerned about what's going to happen when he can hear everything - will the days of Dusk and I being able to speak at all in our household fall by the wayside???) 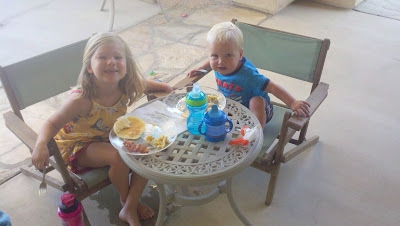 The kids enjoying breakfast out in Palm Springs this past weekend - one way we have peace and quiet at our breakfast table - giving them their own table! Everybody wins!