Well, we did it. After a 2:30am "last supper" of approximately 1 oz of milk (I'm not sure that was really worth setting my alarm for, but at least I tried), and a couple more hours of sleep, Bodie and I booked it out of our driveway and up to the hospital for a 7am call time today. (A huge shout out to the Hale family, for taking Sierra for the day - you saved us, once again! We love the Hale family!)

So Bodie and I got there, game face on, ready to do this.
Ok, let me rephrase. Bodie came with his game clothes (i.e. his Buzz Lightyear jammies) on... 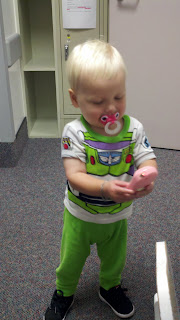 but mommy was only one ready to do this tube thing. The second (and I mean the SECOND) we walked in the hospital doors, he took one look around, starting angling to get out of my arms, screaming "ALL DONE! ALL DONE! ALL DONE!" I don't know what it is about this kid and hospitals, but he just knows. I mean, he hasn't seen the inside of this particular hospital since he was transported out of it to CHLA at 5 days old. Maybe it's a smell, I don't know. All I know is, I spent the next 45 minutes alternating between sitting down to fill out paperwork and chasing him down the hallway as he made a beeline for an exit (any exit, actually - who really cares if it's an emergency exit and the entire hospital goes into lockdown if he presses that red bar? "OUTSIDE! OUTSIDE!"). Every person who dared to make eye contact with him was treated to an immediate "All done! Bye bye!" Poor kid. :-(

We finally made it to the outpatient op area, where we waited to see his ENT and the anesthesiologist. Other than the 10 minutes we spent with them, discussing the procedure and the fact that it was totally fine for Bodie to undergo it even with a runny nose (with kids who really need tubes, it can be almost impossible to find a time where they don't have some sort of sickness going on), I spent most of the next hour trying to keep him away from these doors: 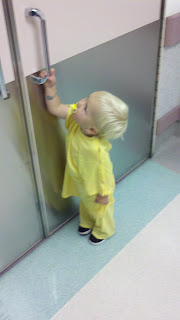 They led back to the waiting room and all he knew was that he WANTED to go. So, naturally, he stood right in front of them, just waiting for them to open...into him. Best part was that they opened automatically, so he got knocked down more than once. Oh, and we spent some time picking up all of mommy's belongings that he had thrown all over the floor screaming "NACK! NACK! NACK!" (he wasn't too fond of the no food rule). And let's not forget when he opened the door to the locked bathroom and charged out into the hallway while mama was still going to the bathroom. Ah...fun times. At least they had a toybox that he could tear apart. The sweet joy on his face when he found a dolly inside was absolutely precious! 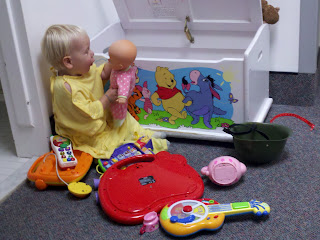 They finally took him back (with Momo, of course) while I waited anxiously in the waiting room. Less than a half hour later, the doctor came out and said everything went great. Apparently the kid had some SERIOUS gunk in both ears - it was so bad the doctor had a hard time suctioning it out. The doctor said he might have some sensitivity to loud noise for the next few days. Funny considering he's been yelling at all of us to be QUIET for the last couple of weeks. :-)

The nurse came out and said Bodie was back in post-op and ready for me. I asked him if Bodie was pissed and he confirmed that yes, Bodie was not happy. I walked into post-op to see 4 nurses standing around him, him screaming at the top of his lungs (as I always say, what he lacks in volume, he makes up for in persistance) and a nurse trying to feed him this: 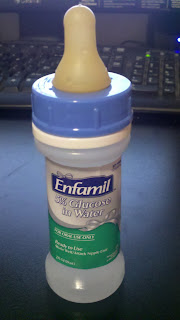 Seriously, lady? My kid is 19 months old and you want to know why he's pissed that you're trying to feed him water through a newborn hospital bottle? The kid hasn't taken a bottle in months - and when he did, there was never water in it. I have no idea why they didn't ask me beforehand to leave a sippy cup. Anyway, they handed him off to me and he sucked back a couple ounces of milk from his sippy cup and then proceeded to thrash and scream for a good 20 minutes. He was PISSED. Thrashing, kicking, grabbing nurse's glasses, you name it. He was turning blue, satting 60's, the whole 9 yards. Turns out he doesn't come out of anesthesia too well. Typical Bodie. He put on quite a show. The nurses were all standing there dumbfounded, asking me "does he usually get mad? Why is he so upset?" I don't mean to be disparaging, really I don't - they were all really nice. It's just that they don't know Bodie like the nurses at CHLA do. I just had to laugh because I would expect nothing less of Bodie. He's strong, he's independent and he can't handle any loss of control.

I finally got him to konk out, his sats came up and he got a good nap in. A half hour later, he woke up, lost his iv and hospital gown, gained back the Buzz Lightyear jammies, threw back a sippy cup and a half and a banana, flirted with all of the nurses (including the one whose glasses he had stolen an hour earlier) and we were on our way home.

Since then, he's been great. Can't say I see any huge change - but since he was so verbal already, I'm not sure what I expected - for him to say "why thank you for the lovely tubes mommy? It's so nice to hear better now." Maybe tomorrow...

Thanks so much for all of your prayers for an easy and complication-free surgery!