Sigh...it seems it's all I can think about these days. I'm not sure why, but something has triggered it to move from the safe recesses in the back of my brain to the forefront. Any of my followers who have single ventricle kids don't even have to ask - you already know what word I'm talking about. For those of you who aren't, I'm speaking of the Fontan, the "final" stage in the palliative surgical approach to HLHS. I use quotations because for many kids it is truly the final surgery for a very long time and they have years, some even decades, afterwards with no surgical intervention. But for others, it's just the beginning of a different type of path, one that includes further surgeries and sometimes transplants and then rejection fears. The thing is, you kinda don't know which path you'll be on until you get past the Fontan. But in most cases, it is the final "planned" surgery - the route that we knew before Bodie's birth would entail the Norwood, the Bi-Directional Glenn and then the Fontan.

I'm usually really good at pushing Fontan thoughts to the back of my mind. We're in the glorious days of the "normal" Glenn life, where you're so far beyond the Norwood and Glenn you kind of forget what it was like, and you're so far out from the Fontan it seems like an eternity away. So you just kind of live life normally and enjoy life and do normal stuff. And you kinda forget your kid even has such crazy physiology. But then, as you creep closer to the Fontan, you start to remember. Thoughts start to seep in. Doubts start to creep in. And that's where I find myself suddenly.

I'm not sure what is triggering it these days, though I do have a few guesses. Since CHLA prefers to do their Fontans between 2 and 3 years old, we should still be a year, maybe 2 years out from Bodie's Fontan (we're looking at next summer or even Summer 2013 if he can hold out that long). So I shouldn't really be thinking about it yet. But a lot of surgical centers do the Fontan at 18-24 months, so maybe it's that Bodie is in that window that's making me think about it and I'm seeing some of his heart buddies gearing up for their Fontans. The knowledge that, were he at another center, he'd have already had his Fontan by now. Oh.My.Throw up now. Maybe it was watching him try to run around and keep up with Sierra and her friends at the museum this past weekend, where he got so winded and his little lips turned purple from all of the exertion. Maybe it's the rapidly approaching 2nd birthday of sweet angel Travis, a fellow HLHS warrior who unfairly and so tragically lost his fight last spring - the knowledge that, were it not for this stinking disease, he would still be here with us, celebrating his 2nd birthday running around and loving on his mommy and daddy, like he should be. Don't even get me started on the tears that flow when thinking about that incredible kid and his family. Ok, deep breath.

Yeah, I think I know why I seem to be fixated on the "F" word these days.

As moms, we are consummate multitaskers, right? Apparently, that even holds true with regard to our emotions. As I think of the Fontan, I am filled with excitement, that he could be "past" all of the surgeries we always knew were coming, that he would have the stamina to keep up with his peers (the difference between pre-Fontan kids, who, like Bodie, pant going up the steps and whose lips turn purple the second they start to run around, and post-Fontan kids, who can run circles around their peers, is amazing from what I hear). I am filled with gratefulness that, as far as we know, he is a good Fontan candidate (with the caveat, of course, that this could change at any time - but, from what we know right now, he should be a good candidate). This is not true for all hypoplasts, and some do have to go to transplant at this stage in their journey, if not sooner. I am beyond grateful that Bodie is still with us and we're even having the luxury of worrying about a surgery a year or further away.

But it is major open heart surgery. I know families who have lost their heart warriors to this surgery, sweet children they have come to know and love, children who have been interwoven so deeply into the fabric of their families. Families with children who have walked into the hospital for this surgery with game faces on, said "I love you" and "goodbye" to their parents and that was it. I know kids who've had strokes, who've had horrendous recoveries and one child who had to have a "Fontan takedown." I know of 3 kids alone this last summer who had staph infections and ended up going home on IV antibiotics. Sigh. THESE are the thoughts that hit me in the shower, that literally take my breath away, make me nauseas and start shaking, make me cry out of the unfairness of it all.

And yet I know of kids who breezed through, were home in a week or two and had relatively minor complications. The tough reality is that we won't know which camp Bodie will fall into. I can only hope and pray that we fall into the latter category. Truly, I know far MORE kids who fall into that last category than any of the aforementioned ones. And even many of the kids who had rough complications ended up ok when all was said and done. So, for tonight and all of the nights I find myself fixated on thoughts of the "F" word, I focus on those success stories - the post-Fontan kids I know who, despite whatever complications they did or didn't have, are doing incredible today. The kids who are finite examples of all of the HOPE there is for HLHS kids these days. Kids who, unless you saw their chests, you would never know what they'd been through. Today, they are my hope.

And Jesus is my ultimate HOPE. HIS promises and HIS love for my family, and my son, holds us together more than anything we could ever find here on earth. I take incredible comfort in knowing that HE loves my son far more than even I can fathom (which is such a hard concept to even understand as a parent, since our own love for our children is so immense). And for that, we are incredibly grateful.

And I focus on the here and now. Because really, when it comes down to it, that's all we have with anyone, healthy or not, right? We have the opportunity, today, to love our children and to cherish them. Thankfully, tomorrow will come in its own time, which affords us the wonderful opportunity to cherish just today. And to love these two children as much as humanly possible. What an incredible gift. 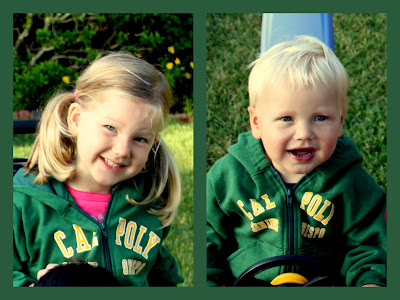