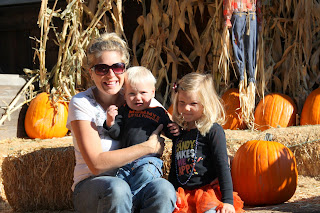 This past weekend, the kids and I did our annual treck up to my parents in San Luis Obispo to pick out pumpkins and Halloween costumes and see a Cal Poly football game. We had a blast. :-)

The kids LOVED the pumpkin patch and Bodie couldn't get enough of either the maze (which, in hindsight (as in, I realized approximately 5 seconds into it), was NOT the best move for a claustrophobic mama) or the hayride out to the pumpkin patch. The second we got off the hayride, he started pointing back at the tractor saying "More! More! More! Ride!" (In fact, later that day, when I was relaying the story to my dad, Bodie overheard and took off away from me. I asked him where he was going and he said "More! Ride!" Apparently he thought the the tractor had followed us home. Poor guy. Here are some of my favorite pics from pumpkin picking:

The super nice driver approached us and asked if Bodie wanted to sit in the driver's seat of the tractor! 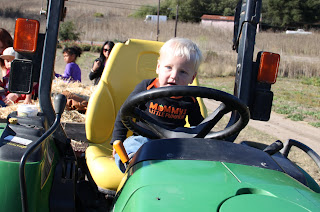 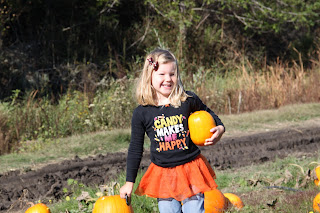 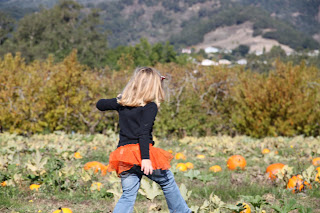 You can't really see here, but Bodie faceplanted into the pumpkins right before we got back on the hayride, so he has dirt all over his little face. 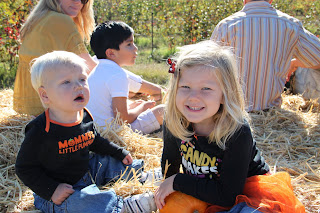 The Poly game was a different experience. I knew Sierra would love it. This is her 3rd year going and she has been talking about it FOR WEEKS. My mom even got her a little Poly cheerleading outfit (oh my goodness, she looked so cute!): 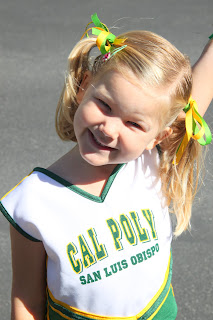 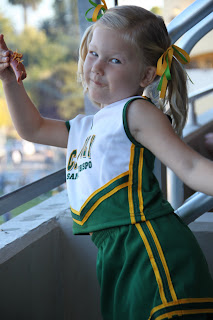 But Bodie was, well, Bodie. From the moment we got there, when I tried to carry him from the car to the tailgating area, and he started thrashing, pointing at the ground and yelling "WALKING! WALKING! WALKING!," I knew I was in trouble. (For the record, I'm not sure why he says "walking" instead of "walk" but heck, who am I to argue with a toddler who wants to properly conjugate verbs?) He did great during the tailgate, because he had free reign to dig through the food and wander everywhere. But as soon as we got into the box, it was a whole different story. He was up and down, climbing over people, standing on the chair to get to the row behind and then clapping for himself once he had done it, climbing over the divider between boxes to the next box over (requiring a man in that box to lift him up and hand him back to me), throwing food everywhere, spilling water bottles, grabbing pompoms and tearing them, etc., etc. Then, we would go inside where he would stand at the door and say "Outside! Outside! Outside!" and promptly throw himself on the floor melodramatically screaming if I wouldn't immediately open the door and let him roam the halls outside the boxes. Are you getting the picture? Apparently folks, we have hit the terrible 2's...4 months early. Awesome.

Can you say troublemaker??? 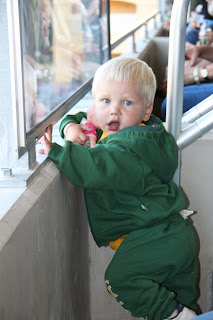 But the silver lining (and it is a HUGE silver lining) is that, even though he didn't sit on my lap for more than approximately 2 and 1/2 seconds at a time and wore me out, his energy is such a blessing. We were there for a total of maybe 5 hours and I don't think he slowed down once. He never showed signs of fatigue, no panting, etc. What an incredible blessing to see a kid with a half a heart have that much energy. As exhausted as I am, I know we are incredibly lucky. 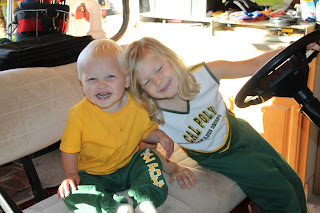 And who wouldn't be lucky to look at faces like this on a regular basis??? 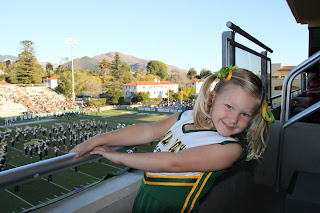 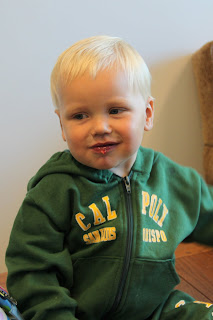 So all in all, it was a WONDERFUL weekend and we loved it!!! Thank you mom and dad for hosting us!

And in other news, Bodie passed his first hearing test EVER last week! HOORAY! The tubes seem to be doing their job!

And, in the category of random tidbits you probably wish you didn't know about me and our family, I had measurements taken at bootcamp this week and the instructor literally had to stop and double check in the middle of measuring my biceps. I said "oh well, I carry  my son on my left side, so my left side might be a little bigger than the right." Uh...try an inch bigger. (That's kind of a big difference on something as small as a bicep.) Apparently all 25 1/2 pounds of Bodie are wearing on me. Thanks a lot big guy. :-)