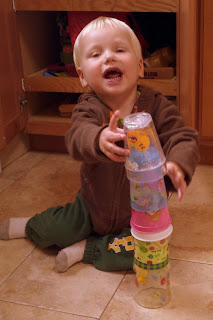 Today is a bittersweet day for me. It's Bodie's last day in his Two Steps Program. Next week, he starts in TWISPP. Let me back up a minute, since most of you (ok, probably everyone but Dusk and my mom) have no idea what that means.

Bodie has been receiving Early Intervention Services through our Regional Center since he was 10 months old. Initially it included Physical Therapy twice a week (for significant gross motor delays due to all of his hospitalizations early on) and Occupational Therapy once a week (for feeding issues related to his vocal cord paresis and difficulty transitioning to solid food). Everything was home-based, which was such a blessing during last year's cold and flu season, when we really didn't want little man getting sick (well, catching anything more than he already caught, which was a fair amount of junk).

After about 6 months of that, they dropped him down to 1 session of PT (at the center), 1 of OT (still at home) and enrolled him in August in a program called "Two Steps." TWO Steps is a graduated therapeutic program designed to prepare children and their families for participation in all facets of society (education, recreation, ADL, wellness).  The child to staff ratio is 2:1, there's 5 kids in Bodie's group and Bodie goes 2 mornings a week for 90 minutes. It's sort of like a really abbreviated pre-school (free play, circle time, gym time, snack time, etc.) Technically, Bodie scored too high cognitively to qualify for Two Steps, but his therapists petioned to get him in because they really thought he would benefit from a little separation from me and learning to properly harness his ridiculously high energy levels, sit still, etc. We were really lucky that he qualified and he has just blossomed in the program. It has helped tremendously with his separation anxiety - he no longer even glances in my direction when I leave (for the most part) and generally has a great time. He loves his therapists.

Now that he's mastered that, they tell me he's ready for the next step, TWISPP. TWISPP is a center-based early intervention group program with support from OT, PT, speech and mental health. It is a program for children who are at risk for developmental delays, children with identified disorders and for children who are typically developing. Children range from 18 months to 3 years of age. The child-to-staff ratio is 3:1. The emphasis of this program is on prevention, early intervention, and enrichment in a playful and supportive environment. Think of it like a preschool run by therapists.

So Bodie starts in TWISPP next week 2 mornings a week for 3 hours. He's been approved for 3 days a week, but we're going to start with 2 and see how he does. I'm really excited for him. I suppose it might seem like I'm pushing him -he is, after all, only 20 months and it's a little early to be thinking about preschool. But I really think this is going to be SO good for him. He's such a social kid and clearly needs the exposure to other children, both on a social and developmental level. Socially, he will love interacting with other kids. And developmentally, I think it will be great for him to be around other "typical" kids (which there are a fair amount of in the program as well as kids who have various developmental delays) who can model age appropriate behavior for him. And I LOVE the fact that the whole program is run by therapists! Although Bodie hasn't shown any big red flags for developmental issues at this point (other than the excessive amounts of energy, which could just be typical boy stuff), we do know that he's at-risk for other developmental delays. I like knowing that therapists who are trained in spotting and treating developmental delays run the program. Not to mention that, because it's through our Regional Center, it's free!!!

So, as I said, it's a BIG day for us. I got teary-eyed when I dropped him off this morning - and so did his therapists. Even though TWISPP is literally across the hall from Two Steps, he'll be working with new therapists in a new room. Big changes. Good changes for Bodie. But change, nonetheless. And if you've been reading my blog for very long, you know this mama does NOT do well with change. So, would appreciate a little extra prayer over our whole family this next week, that the transition goes smoothly (and that I can get both kids to school/therapy on time, now that they have to be 2 different places at the same time!) and that Bodie thrives in TWISPP as he has in Two Steps.

Oh, and in completely unrelated news, the ENT was able to find Bodie's "missing" ear tube! Last week, either he or I stuck the thermometer too far into his ear canal, resulting in his ear bleeding literally for 3 days straight. (Oh my word, the ear can bleed (especially for a kid on aspirin)! Who knew?) When the ENT could finally get us in, she confirmed it was in fact not his brain matter leaking out his ears (as Daddy had thought), but probably just a scratch. But the blood and fluid we had seen draining out of the ear probably dislodged whatever was blocking the tube when the pediatrician had been looking. So, the bad news was he hurt his ear- but the good news was that in the process, we found the missing tube!